On Monday, a liberal blogger revealed that Congressman Steve Scalise (R-La.) spoke at a conference hosted by white supremacists in 2002 and the “big three” (ABC, CBS, and NBC) networks eagerly jumped on the story. Starting with Tuesday’s morning news shows, the “big three” have given 13 minutes and 7 seconds to Scalise’s 2002 speech with each network doing its best to push how it could hurt Republican efforts at reaching out to minority voters.

In the aftermath of third ranking House Republican Steve Scalise’s scandal regarding a meeting with a white nationalist group, Fox News Special Report panelist Charles Krauthammer noted a seemingly obvious double standard. While Scalise is being hit hard – and justifiably so – by the media for his actions, President Obama largely was excused for sitting in on Reverend Jeremiah Wright’s racist, anti-American sermons.

Krauthammer criticized the fact that Scalise is being held accountable “for a single event 12 years ago,” but the President spent over two decades at Rev. Wright’s church and the liberal media gave him a pass. He added that he didn’t “even think it’s comparable.”

Talking to white supremacists is apparently a much more scandalous offense than sex with a 15-year-old boy.  A liberal blogger found House Minority Whip Steve Scalise spoke to a David Duke-affiliated group in 2002, and The Washington Post published a front-page story that was 1,621 words long. The New York Times wrote a 641-word story and placed it on A-10.

But neither paper has touched the tale of 65-year-old Terry Bean -- who donated $500,000 to Obama and founded the gay-left activist group Human Rights Campaign –  arraigned on December 4 for sex with a 15-year-old boy.

On December 29, Congressman Steve Scalise (R-La.) admitted that he spoke at a convention of white supremacists in 2002 while serving as a Louisiana state legislator and the “big three” (ABC, CBS, and NBC) networks predictably had a field day with the story. On Tuesday, all three networks provided full reports on Congressman Scalise during their morning newscasts totaling 5 minutes 44 seconds. CBS News reporter Jan Crawford declared that “this comes as the GOP is really trying to burnish its image, reach out to African-Americans and other minorities and this obviously does not help.”

On the July 28 edition of NewsNation, anchor Tamron Hall did her part to push the alarmist liberal narrative about how radical Republicans are itching to impeach President Obama. The news hook for this was how “the new incoming House GOP whip, Tea Party backed Louisiana congressman Steve Scalise will not rule out impeaching the president over his use of executive orders.” This despite the fact there’s much “unfinished business” and “that urgent do list” of  “the border crisis” and “funding for the nation’s highway and infrastructure project” on Congress’s plate.

The Today show co-anchor aired a clip from Fox News Sunday of host Chris Wallace repeatedly asking the Louisiana Republican if he would “consider impeaching the president.” Wallace responded that “it might be the first White House in history that is trying to start the narrative of impeaching their own president.” Of course, nowhere in the clip did the Louisiana representative insinuate that he was angling for impeachment. Instead Scalise called out the White House for stressing impeachment talks in an attempt “to fundraise off of that” and “change the topic away from the president's failed agenda.” [See video below. Click here for MP3 audio]

On Friday, CBS's Early Show was the only Big Three morning show to cover Energy Secretary Steven Chu's testimony before a congressional hearing on the $528 million loan to the bankrupt solar panel company Solyndra. NBC previewed the hearing on Thursday's Today show, but avoided it the following morning. ABC's GMA completely ignored it both days.

Fill-in news anchor Betty Nguyen gave a 44-second news brief during the 7 am half hour of The Early Show, noting how Secretary Chu "made no apologies for the loan of more than $500 million to Solyndra back in 2009" during the hearing. However, the CBS morning show didn't air a full report on the controversy until the top of the 8 am hour.

Louisiana Congressman Smacks Down Chris Matthews: If Titanic Sank Today Obama Would Blame It On Bush 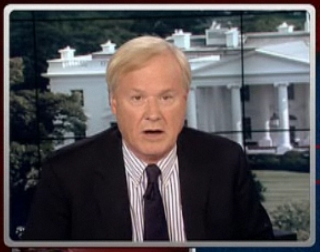 Chris Matthews on Friday got himself marvelously smacked down by a Louisiana Congressman.

In an at times heated discussion about energy policy with Reps. Debbie Wasserman Schultz (D-Fla.) and Steve Scalise (R-La.), the "Hardball" host continually bashed the GOP.

"The smartest move for your party is to screw things up for the next couple of years, right through November, get the country completely bollixed up, and they will vote Republican out of desperation, and you will have more power," said Matthews. "Is that the strategy of the Republican Party this year?"

When Scalise refuted this claim, Matthews added, "If the Titanic sank today, you know what the Republicans would be saying? Don`t be telling the shipping lines they need more life rafts or life preservers."

Scalise marvelously responded, "If the Titanic sank today, I`m sure the president would try to blame it on George Bush" (video follows with partial transcript and commentary):