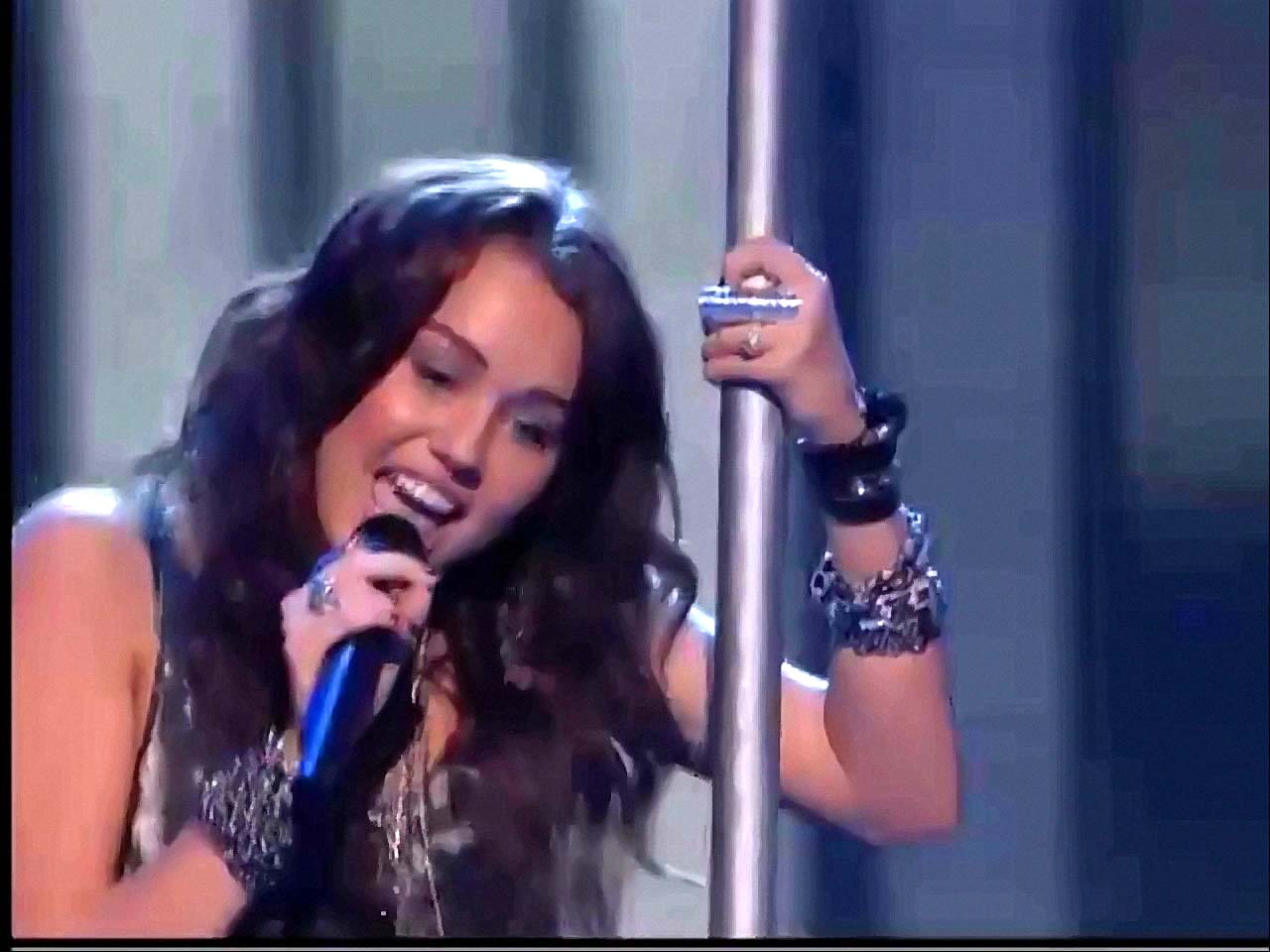 An iconic child (now teen) star performs a pole dance at an awards show aimed at teens. Most of the media shrug. Welcome to Hollywood 2009.

At the Teen Choice Awards, which took place Aug. 9 and aired Aug. 10 on Fox, Miley Cyrus, the 16-year-old Disney-created star of the wildly popular "Hannah Montana," franchise performed "Party in the U.S.A." Clad in short-shorts, high-heeled boots and a tank top that revealed a black bra, Cyrus danced around a pole affixed to the top of an ice cream cart.

Admittedly, the pole moves were a small portion of her performance, but it raised the question of whether a pole belongs in any dance choreographed for a 16-year-old performing for others her age.

The 41-year-old Oscar winner Jamie Foxx dished out some disgusting advice for Disney teen sensation Miley Cyrus, telling her to, among other things, “make a sex tape and grow up.” This tasteless “advice” coming from the father of a teen to a sixteen year-old girl didn’t seem to outrage anyone at ABC, CBS, or NBC.

“The Foxxhole,” Jamie Foxx’s weekend radio show was the forum for a discussion of what makes an artist respectable. Foxx and his co hosts suggested that famous pop idol Miley Cyrus could gain respect as an artist if she would “make a sex tape and grow up... get like Britney Spears and do some heroin... do like Lindsay Lohan and get some crack in your pipe... catch Chlamydia on a bicycle seat.”

As if the “advice” wasn’t enough, Foxx also made fun of Cyrus’ appearance. To assure himself that he had identified the correct Cyrus, Foxx asked his co host, “The one with all the gums? She gotta get a gum transplant… s**t. Uh, uh, let me get an order of mouth, light on teeth, uh heavy on the gum.”

Hillary Clinton, Queen of Soul? Barack Obama, All-American teenaged girl?  That's precisely the analogy that Joe Scarborough made this morning in trying to explain why many Hillary supporters haven't swung to Obama.  Hillary was a guest on today's Morning Joe, and the interview offered a number of other interesting tidbits:

But let's get back to Joe's conventional-wisdom busting musical metaphor, which came after Hillary had offered an innocuous answer to guest panelist John Ridley's question as to why many of her supporters remain uncommitted to Obama.

“OMFG” is text-speak for the unspeakable. It's also the tag line for a new ad campaign aimed at teens and featuring a jumble of sexual situations, including teens undressing each other and two girls kissing. The campaign blitz is appearing in print and television, all aimed at drumming up eyeballs for the CW network's teen-themed soap "Gossip Girl."

For the uninitiated, “OMG” translates to “Oh My God” in the language of email and text messaging. The addition of the “F” means … well, it’s the word that can cost broadcasters a hefty government fine if someone actually says it on TV.

Now, of course, executives at the CW could never admit that they were actively targeting teens with such a "provocative" ad. Nor would they ever admit they were intentionally dodging an FCC fine by using the letter "F" instead of the unspeakable word. Nor would they ever consider that "F" used next to "G," which stands for "God" would be blasphemous. In fact they've gone out of their way on these subjects. But reality has a way of well, keeping it real.

Last night on CNN Headline News's "Showbiz Tonight," so-called Hip Hop Professor Marc Lamont Hill noted that he was "freaked out" by Hannah Montana star Miley Cyrus's claim that she loves Jesus. Host AJ Hammer played a clip from a YouTube video where Cyrus and pal Mandy answered fans' questions, this one dedicated to their religion:

We love Jesus. Happy Easter by the way. He died for our sins. That is how great he is. That`s why we do what we do. I sing and act Jesus. Not the acting but I sing and dance for Jesus. Actually, I act for Jesus, too. And now that I think about it, I do everything for Jesus.

Yeah, we are. For Jesus.