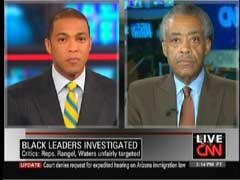 On Sunday's Newsroom, CNN's Don Lemon conducted a softball interview of the Rev. Al Sharpton and helped him forward the theory that the congressional ethics investigations into Representatives Charlie Rangel and Maxine Waters are being conducted because they are black. Lemon also didn't go into much detail as to what the charges against the two were and what were the circumstances of their cases.

The anchor interviewed the liberal minister 12 minutes into the 6 pm Eastern hour. Before introducing Sharpton, Lemon did mention that Congressman Rangel was "accused of violating 13 House Rules" and that the "accusations range from financial wrongdoing to damaging the credibility of Congress," but never mentioned during the segment that the charges mainly involve rental properties the New York representatives owns in his district and in the Dominican Republic. He also noted that Rep. Waters "has chosen to face a House ethics trial related to claims involving federal aid to a bank with ties to both Waters and her husband" but didn't give additional details about that case.

Lemon then set up his topic of discussion with the reverend: "Now, the investigation of such powerful people, like Rangel and Maxine Waters, have a lot of people talking. The reaction in Washington seems to be centered on whether the two House members are guilty or not, but back home, in their respective districts, some of their constituents aren't so sure justice is being done, and some are openly questioning why two high profile African-American House members are coming under such tough scrutiny." He then asked Sharpton, "Do you think that black members are being targeted unfairly by the Ethics Committee?"

Mika: With More Women In Charge, Wall St. Meltdown 'Simply Would Not Have Happened'

Striking a blow for her sex, Mika Brzezinski today claimed that the Wall Street meltdown "simply would not have happened" if more women had been in charge.

The Morning Joe co-host was reacting to news that the Dems managed to slip into the recently enacted financial regulation bill a provision--authored by Rep. Maxine Waters--that would create "at least 20 new Offices of Minority and Women Inclusion" with the power to kill government contracts with financial firms not meeting new "diversity standards."

Tina Brown seconded her sister's sentiment, blaming the financial industry's woes on "all this phallic obsession."

What's good for Wall Street is presumably good for Washington, too.  Mika Brzezinski--founder of Feminists For Palin, perhaps?

Do Democrats actually believe referring to Tea Party attendees by a provocative sexual term will help bring the country together?

And why would a member of Congress need journalists to find out what's on the minds of her constituents?

Such questions seem quite important as more and more leftwing politicians refer to folks whose opinions they disagree with as "teabaggers."

Most recent on the list was Congressman Maxine Waters (D-Cali.) who on Wednesday told radio's Bill Press, "I want journalists to be all over those rallies and those marches with the birthers and the teabaggers" (YouTube audio embedded below the fold with partial transcript, h/t Sean Hannity):

Maxine Waters, a key Democrat congresswoman that has been implicated in blocking government oversight that could have prevented the current financial crisis, was caught lying Friday evening about her connection to failed lenders Fannie Mae and Freddie Mac.

During the panel discussion of HBO's "Real Time," Waters was challenged by the Wall Street Journal's Stephen Moore about the campaign contributions she's received from these government sponsored enterprises.

Despite what public records clearly show, Waters denied she had ever taken any money from these two companies (video embedded right courtesy our dear friend MsUnderestimated):

When it comes to investigating Dems, the MSM is all Moveon.org. But when a Republican is potentially in the crosshairs, the liberal media suddenly goes Eliot Ness . . .

Take the New York Times editorial of this morning, Mr. Rove Gets Out of Town, which amounts to an extended plea to Democrats to investigate Karl Rove on matters sundry. Huffs the Times: