Ever wonder why more women are reluctant to describe themselves as feminists?

“Daily Show” co-creator Lizz Winsted is going on tour to fund Planned Parenthood, and Lucas Kavner of the Huffington Post insisted that this is somehow not leftist:

While her comedy has always been inherently political – and she's not backing down from her own personal affiliations – this tour is not aimed at those on the right or left. It's merely to raise awareness and support for an organization that has been an essential part of her life.

Alleged Comedian Lizz Winstead Fantasizes It Would Be 'Awesome!' to Electrocute Glenn Beck

Give the woman credit -- liberals are seldom this candid about their impulse toward totalitarianism. Usually it takes a bit of prodding before you'll hear that voice of the guard in the gulag.

Lizz Winstead, co-founder of The Daily Show and alumna of the late, hardly lamented Air America Radio, revealed her pathological side while appearing on Ed Schultz's radio show yesterday, as described by Brian Maloney over at The Radio Equalizer --

WINSTEAD: Ed, I've always wished that somebody would invent, maybe you and I could go into business and do this, if somebody would invent, you know those shock collars that you put on the dog? (Schultz laughs) That when they bark they get jarred? If we could make one that actually fact-checked and we just put it around Glenn Beck's neck and when he spoke (pause), or just fake tears, if it could detect when tears were actually crocodile tears, and then you just get electrocuted by the water and jarred, like, that would be awesome! Force him to wear it. 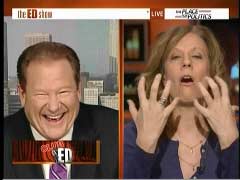 On Friday’s The Ed Show on MSNBC, host Ed Schultz trashed conservative activist Phyllis Schlafly, repeatedly mispronouncing her name as "Schafly," for linking being a single woman and having a greater likelihood of depending on government programs, as she noted at a recent GOP fundraiser that 70 percent of single women voted for Barack Obama. At the top of the show, Schultz teased: "I`ve got some choice words for the ‘Wicked Witch of the Midwest’ tonight – and that`s what she is." He later plugged before a commercial break: "Speaking of ‘Psycho Talkers,’ ‘Wicked Witch of the Midwest’ Phyllis Schafly [sic] got off her broomstick long enough to take a shot at unmarried women of America."

Later in the show, after conservative talk radio host Heidi Harris had appeared in a segment to defend Schlafly, Daily Show co-creator and regular guest Lizz Winstead appeared for the "Club Ed" segment and bashed Harris as "that teabagging Carol Brady," advising Schultz that "you have got to slam her down when she is absolutely wrong." After the Daily Show co-creator went on to charge that Schlafly "can empty her bowels through her mouth and just exhaust horrifying crap onto the universe," an impressed Schultz laughed and cheered her on as he seemed to refer to Winstead’s rant declaring, "That’s great stuff":

Behar Blames Palin for Making Her Children Targets, ‘Passing That Kid Out More Than a Joint at a Grateful Dead Concert’ 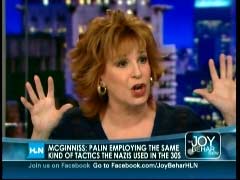 After having already used her appearance on Wednesday’s The View show on ABC to defend author Joe McGinniss’s claim that Sarah Palin was acting like a Nazi trying to intimidate him, Joy Behar again defended McGinniss on the same day’s Joy Behar Show on HLN, and suggested that Palin is responsible for making her children into targets for daring to let the public see her family – as most politicians do – while she was running for Vice President. Behar: "The other thing is that isn`t she the one who put her kids in the spotlight in the first place? I mean, they, at the convention, when they were passing that kid out more than a joint at a Grateful Dead concert. Remember that? I mean, she started it, as far as I can tell."

Guest Lizz Winstead, co-creator of the Daily Show, then chimed in that Palin had already written about her "dumb life": "She already wrote a book about her own dumb life anyway, and, as far as I can tell, when Joe McGinniss writes about Sarah Palin, he doesn`t go into her personal life. He`s writing about whether or not she has a modicum of skill to run anything."

Beck Should Be Institutionalized, 'Abusive' to Have Him on TV Says 'Daily Show' Creator

Don't have the clout to get "The Daily Show's" Jon Stewart on your primetime program like Fox News Channel's Bill O'Reilly? You can always opt for Lizz Winstead.

"He should be institutionalized," Winstead said. "First of all Glenn Beck, why is he even on television? I think it's somehow abusive to have Glenn Beck on TV because he seems mentally unstable."

Air America’s website is loving Joy Behar’s show on CNN Headline News. Last Wednesday, Joy took a whack at conservative talker Sean Hannity as she introduced discussion on whether women have a "G-spot" of sexual satisfaction.