Here's a nice catch by Kyle Wingfield at the Atlanta Journal Constitution.

In late October, continuing a four-year pattern of making such claims, MIT's Jonathan Gruber, who along with Ezekiel "Zeke the Bleak" Emanuel is considered one of the two "architects" of the Affordable Care Act, aka Obamacare, pointed to a study which claimed that "the Affordable Care Act is working even better than expected, producing more coverage for much less money." But, as Wingfield noted in his Friday column, Gruber sang a totally different tune when quoted in the Washington Post on Thursday.

MSNBC’s Alex Witt: ‘Does It Matter’ That Obama Lied About ObamaCare?

Leave it to MSNBC weekend anchor Alex Witt to continue marching forward, carrying the flag of ObamaCare as the rollout phase sputters along at a crawl. On Sunday’s Weekends with Alex Witt, the host often came across as a White House publicist, defending both the president and his health care law.

Witt began her show by interviewing Jonathan Gruber, one of the architects of both ObamaCare and Mitt Romney’s Massachusetts health care plan. After playing a brief compilation of President Obama insisting, “If you like your health care plan, you keep your health care plan,” Witt asked Gruber, “When you heard these words, did you know that what the president was saying may not present the whole picture, and does it matter?” [See video below the break.]

Julie Rovner, NPR's resident ObamaCare flack, failed to include any conservatives experts for her report on Medicare on Tuesday's All Things Considered . Rovner played two sound bites each from Drew Altman of the Kaiser Family Foundation and from MIT's Jonathan Gruber, whom the Washington Post named the Democratic Party's "most influential health-care expert." She didn't mention either individual's liberal affiliations.

The closest that the correspondent got to mentioning their left-of-center politics is when she pointed out how Gruber "likes the way the Affordable Care Act takes on Medicare with a variety of approaches."

The MIT economist behind much of the concepts involved in ObamaCare is making a comic book to try to get Americans to like his idea. 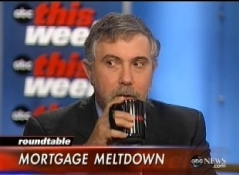 New York Times columnist Paul Krugman's double standards: A conservative radio host who was paid by the Bush administration to push its education agenda was "on the take," but a liberal professor paid by the Obama administration while pushing its health care agenda "is no big deal."

When it was revealed in January 2005 that conservative radio host and commentator Armstrong Williams was paid $240,000 by the Bush administration Department of Education to promote the No Child Left Behind program on his radio show, the New York Times ran multiple disapproving accounts of the payouts.

The point is that there really isn't much difference between Mr. Abramoff's paying Mr. Ferrara to praise the sweatshops of the Marianas and the Department of Education's paying Armstrong Williams to praise No Child Left Behind. In both cases, the ultimate paymaster was the Republican political machine. And inquiring minds want to know: Who else is on the take? Or has the culture of corruption spread so far that the question is, Who isn't?

What a difference a new administration makes.