FNC's Wallace on Spitzer: 'Gosh, What an Idiot'

Fox News's Chris Wallace was once again Steve Malzberg's guest on WOR radio Thursday, and the host of "Fox News Sunday" made some comments about Eliot Spitzer, Geraldine Ferraro, and the current Democrat campaign for president that are guaranteed to raise eyebrows on both sides of the aisle.

In an interview that covered many subjects, Wallace said of Spitzer, "Gosh, what an idiot," while strongly disagreeing with Geraldine Ferraro's recent statements about Barack Obama, and concluded by saying that the "identity politics" the Democrats have been playing for years "is now coming back to bite them, big time" in such a fashion that it could "tear the Party apart."

To get things rolling, Malzberg asked his guest about the Spitzer resignation (15-minute audio available here):

Mika Goes to Bat for Barack on Rev. Wright

On today's Morning Joe, Obama fan Mika Brzezinski did her best to defuse the spot of bother Barack is in over the extremist statements made by his personal spiritual advisor, the Rev. Dr. Jeremiah Wright, Jr.

Over the course of the three-hour show, Mika variously and repeatedly:

And then there was my favorite. Mika speculated that the sermon in which Wright used the n-word to make an invidious comparison between Hillary and Obama might have been six years old. That's right. Brzezinski imagined that Wright might have taken to his pulpit to excoriate Hillary back in 2001 or 2002, at a time when Barack was a mere Illinois state senator and the presidency not even a gleam in his eye. 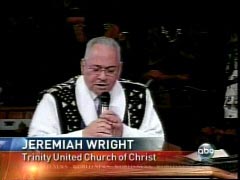 As Jeremiah Wright's screaming sermons have gone from ABC across the media in the last 24 hours, many are asking: where were the networks on this story? It sounds like Obama's minister is less versed in the audacity of hope than in the audacity of hate. A Nexis search of network transcripts shows that up until now, Obama's church and minister have been barely mentioned -- and usually as an Obama defense mechanism.

By Mark Finkelstein | March 13, 2008 10:50 PM EDT
Who cares if our next president has chosen as his "spiritual guide" someone who calls on God to damn America, and believes the US brought 9-11 on itself? Completely off track! Let's get back to the important stuff. You know, like the fine print of the candidate's plan to nationalize health care.

That in a nutshell is Anderson Cooper's kvetch about the controversy over the outrageous statements made by Rev. Dr. Jeremiah Wright, Jr., the pastor of Barack Obama's church and the man Obama has described as his spiritual guide and advisor.

Cooper made his comments on his 360 show this evening.

ANDERSON COOPER: Is this just the kind of thing that happens in campaigns? It seems we're almost at a point now where it's this or other issues for the Clinton campaign where people are just latching onto anything to strike a blow against their opponent. All this seems to have nothing to do with actual issues that the country is facing which these candidates should be talking about and we probably should be talking about.

At the end of a Good Morning America segment today about Barack Obama's pastor, the Rev. Dr. Jeremiah A. Wright, Jr., an Obama campaign representative complained that John McCain's pastor had not been similarly "vetted." If that's true, then ABC or some other media outlet surely should and will do so.

Let's imagine that upon vetting, McCain's pastor is found to have made statements that were the mirror-image of those that Rev. Wright has made. How long would McCain remain a viable candidate? Judge for yourself, based on Rev. Wright's statements as exposed in the GMA segment that was the result of work by ABC's chief investigative correspondent Brian Ross. GMA aired a number of clips from sermons Rev. Wright gave at his Trinity United Church of Christ.

JEREMIAH WRIGHT: "The government gives them the drugs, builds bigger prisons, passes a three-strike law, and then wants us to sing God Bless America? No, no, no! Not God bless America. God damn America! It's in the Bible, for killing innocent people. God damn America for treating its citizens as less than human!"

The Audacity of the Media’s Coverage of Obama’s Church

Illinois Democrat Senator Barrack Hussein Obama is, of course, the Media Darling for President this next go ‘round, at least du jour and for the moment.

After six months (years?) of their extended coronation of Hillary Rodham Clinton, they chose to depose her after but one loss -- in Iowa, the Ethanol State.

The Queen is dead, long live the King.

Having won the Iowa caucuses, and having placed second in the New Hampshire primary, Obama is unquestionably a Top Two contender for the Democrat nomination, and is the media's new Donkey heartthrob.