On Friday, June 12, the PBS program Now (formerly hosted by Bill Moyers) devoted most of its half-hour to the complaints of late-term abortionists Warren Hern and LeRoy Carhart smearing the pro-life movement. Hern called it a "terrorist movement," and Carhart said despite the flood of pro-life group press releases denouncing George Tiller’s murder, the movement’s "heart was certainly with Scott Roeder on the day he shot Dr. Tiller."

By Mike Sargent | June 11, 2009 4:27 PM EDT
Michael Rowe has an article on the Huffington Post, posted today, that makes a few wild-eyed claims about right-wing extremists.

For example, Ann Coulter is responsible for yesterday’s tragic shooting at the Holocaust Museum.

Bill O’Reilly is responsible for the shooting of well-known abortion doctor George Tiller.

Oh, and the coup de grace: Sarah Palin and all of her supporters are raging racists.

That’s not to mention the implication that Rush Limbaugh, Sean Hannity, Mark Levin, Glenn Beck, and all of Fox News were the favorite news sources of James von Brunn, now-infamous shooter at the Holocaust museum.

Idiotic though these claims most certainly are, liberal bilge of this magnitude demands confrontation.  First, examine what Rowe wrote on Ann Coulter:

ABC gave pro-abortion advocates free advertising last night with its "World News Sunday." During the report, an abortionist unequivocally stated that late-term abortion is "really a miscarriage of a stillborn fetus."

Anchor Dan Harris framed Steve Osunsami's segment  as a look at why doctors risk their lives to perform abortions given the "constant threat" of violence they face, as evidenced by last week's murder of abortionist George Tiller and recent comments from Tiller's accused killer that "similar attacks are planned all over the country."

Harris teased the segment "Tonight, we talk to late-term abortion providers who fear they are targets. Why do they do it?" He stated in his introduction, "Why would a doctor take that risk? And why would a woman make that choice?" 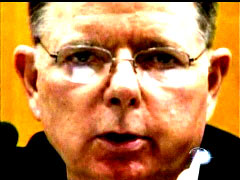 Over at Get Religion, Mollie Z. Hemingway lamented how reporters are trying to use the murder of late-term abortionist George Tiller at church to challenge "popular perceptions" that abortionists can’t be a "faithful member of the Lutheran church" and love Jesus. 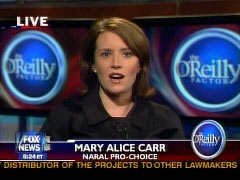 On Thursday night's O'Reilly Factor, Bill O'Reilly lit into NARAL publicist Mary Alice Carr for her Washington Post op-ed blaming him for the murder of abortionist George Tiller -- and following up on the NewsBusters report on her article's reckless factual errors, whacked her for lying: 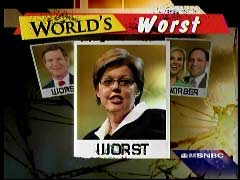 MSNBC’s partisan-in-chief Keith Olbermann used his “Worst Person in the World” segment on Thursday evening to falsely accuse pro-life blogger Jill Stanek of posting the “addresses of the only two remaining physicians who will provide late-term abortions when the woman’s life is in danger,” thus enabling “a bunch of crazy people, like your readers, where they can find somebody and abuse, threaten, or kill them.”

Stanek actually did not post addresses of the two abortionsts, LeRoy Carhart and Warren Hern, in the two items in which she included pictures of Cahart’s drab-looking center. The former nurse, who achieved notoriety for her testimony about the exposure deaths of infants who survived their late-term abortions at Christ Hospital in Oak Lawn, Illinois, pointed out in her retort to Olbermann that the Los Angeles Times and the Associated Press had done the something similar- posting pictures of both physicians’ centers. She also snarked back that “Keith had best make Google the ‘Worst Search Engine in the World!’ for posting a map and directions to Carhart’s Abortion & Contraception Clinic of Nebraska and Hern’s Boulder Abortion Clinic.”

Is NPR Skipping Over the Murder of Private William Long?

Just like audio offered on the National Public Radio website, NPR transcripts in Nexis do not include top-of-the-hour newscasts. But a quick Nexis search finds there is no mention of the Monday shooting of Private William Long at a Little Rock recruiting station by a Muslim convert. I searched for "William Long," "army private," and "Little Rock."

Pro-Lifers' Crosses -- Like the Burning Crosses of the KKK?

CNN anchor Anderson Cooper conducted a five-minute long interview of Diane Elder, a woman who decided to let her infant daughter live despite her severe genetic defects, during his program on Tuesday evening. The interview came about after Elder wrote Cooper after watching a similar interview he conducted the previous night of Lynda Waddington, a “pro-choice” blogger for the Huffington Post and RH Reality Check, who decided to have a late-term abortion herself (the anchor did not mention Waddington’s left-wing affiliations during the interview). (audio clips from the interview available here)

On Wednesday afternoon, the network’s “Situation Room” program played an extended clip from the interview, which followed an additional segment with a different parent whose twins were aborted late-term at the hands of murdered abortionist George Tiller. During this second interview, the father of the twins described how Tiller had the two babies “wrapped up in a baby’s blanket” and how the abortionist “baptized them.” Despite the two-to-one imbalance in the segments, CNN did at least try to balance the segments with the two supporters of late-term abortion with that of the interview of Elder.

During the interview with Cooper, Elder described her experiences during the four months after she found out that her daughter had Trisomy 18, a severe genetic disorder, and during the half-day that she shared with her daughter, whom she named Angela. Despite all the hardships that she and her family endured, Elder recounted how after her daughter was born, “we were very taken aback when we found that, when she was placed in our arms, we were happy. We were- we were incredibly happy. And my husband was with me. A lot of family and friends showed up right after the birth. She was passed around from arm to- from arms to arms.” Cooper dealt with the subject very sensitively, and thanked her for her strength at the end of the interview. 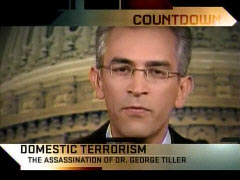 Keith Olbermann’s Fox News-hating frenzy on Monday night might have obscured the nasty accusations against pro-lifers Olbermann drew out of Richard Wolffe, who recently left his job as a political reporter at Newsweek to be a full-time MSNBC pundit.

Kos Kids Back at it – Wishing Death upon Michelle Malkin

Wasn't it just a couple of days ago that the crew over at the Daily Kos was fretting about how conservatives as a whole are equally as complicit in the murder of George Tiller as the shooter himself?  And of the details being reported to better understand the background of the actual killer, Scott Roeder, doesn't one major detail involve the posts that he left on anti-abortion Web sites?

With that in mind, how concerned should we be with a blog post that fantasizes about the death of conservative columnist Michelle Malkin?

In a posting titled ‘Michelle Malkin - The Book', an individual using the handle cousinavi, creates a story which refers to Malkin's husband in a derogatory manner more than once, and eventually fantasizes about her choking to death.

Should this story, which appears to be written at a third grade level, be taken for what the ‘writer' intends - a ‘total work of fiction'?  Or should it be taken for what it really is, an attempt to get Kos readers to indulge in the ‘writer's' imagination, inciting equally provocative death fantasies about Malkin?

Excerpts below the jump (Warning!  Offensive language, equally offensive to those with an education)...