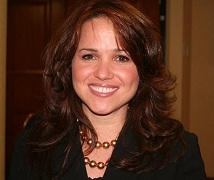 Delaware might soon be referred to as "Little Alaska" not only because of its relatively small size in area but, more importantly, because the September 14 Republican senate primary in that state threatens to become a possible repeat of what recently happened in Alaska when little known Tea Party backed candidate, Joe Miller, apparently defeated the establishment incumbent, Senator Lisa Murkowski (absentee ballots still being counted). In the "Little Alaska" state of Delaware, Joe Miller comes in the form of little known Christine O'Donnell who is challenging "moderate" Congressman Mike Castle who has, until now, been considered as the sure victor in that state's primary. However, after what happened in Alaska, the O'Donnell challenge has to be taken more seriously.

Michelle Malkin is now focusing on that election in which anything, after Alaska, now seems possible:

Well, 70-year-old, nine-term House cap-and-taxer GOP Rep. Mike Castle has a challenger. She’s Christine O’Donnell — a young, energetic, fresh-faced conservative activist with a real shot at dislodging the entrenched liberal Republican. She’s been traveling the state of Delaware non-stop and reaching out to conservatives across the country for support. I met her on Saturday at a grass-roots gathering of Moms 4 America in Washington, D.C. Castle refuses to debate her and has resorted to sneaking in and out of local GOP meetings to avoid her. He has bagged out on four scheduled GOP primary debates, most recently one sponsored by the League of Women Voters. The establishment Republican fund-raising organizations are sticking by their big government brother.