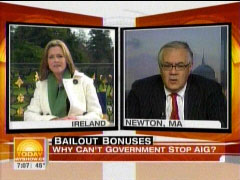 Barney Frank was allowed, by NBC's Meredith Vieira, to go on a tear against AIG for wasting bailout money on corporate bonuses, on Monday's "Today" show, yet Vieira never once interrupted Frank to point out his own wasteful stimulus spending on earmarks going to Frank's home district, including $1 million for scallop research. Vieira also didn't interject when Frank blamed the Bush administration for failed economic oversight, even though it was Frank who blocked reforms of Fannie Mae and Freddie Mac, something former Vice President Dick Cheney brought up on this Sunday's "State of the Union," on CNN.

Vieira never asked a challenging question throughout the whole interview, instead choosing to let Frank rant: "The time has come for the federal government to put some people in charge...When we were asked by the Bush administration and the Federal Reserve last fall, to do these things, they resisted some of the conditions we wanted to put on."

The following is a complete transcript of the interview with Frank as it was aired on the March 16, "Today" show:

The Treasury Department oversees the Internal Revenue Service. But if the Secretary of the Treasury - or any other political appointee being considered for the Treasury Department - didn't pay his income payroll taxes, it doesn't matter. That's the message from House Banking Committee Chairman Rep. Barney Frank, D-Mass., and he blamed the fourth estate for acting like it does matter.

On MSNBC's March 11 broadcast of "Andrea Mitchell Reports," host Andrea Mitchell asked Frank to respond to criticism in a March 11 piece from New York Times columnist Thomas Friedman that too many appointees were being held up for what he deemed insignificant reasons.

"I think it's a problem, although I will say this - for the media to blame that entirely on the Senate seems to me a little bit self serving," Frank said. "I mean, the media is the problem here, in part. It is the over-focus on part of people in the media to relatively minor infractions that causes this. I guarantee you my colleagues would not on their own be doing this. So I do think we are in a culture now where a lack of perfection exacts too strong a toll, but that's the politicians reacting to the media."

A prominent Democrat made news on MSNBC Feb. 11 with his guarantee of new financial industry regulations "comparable" to FDR's New Deal.

House Financial Services Committee Chairman Rep. Barney Frank, D-Mass., appeared on MSNBC's "Rachel Maddow Show" Feb. 11 and told the MSNBC and Air America host that things should be done to limit what financial services can do, specifically when it comes to compensation.

"There's no question about it for the future," Frank said. "Look, there's a problem with the American system and we as liberals should be honoring this. The principle that you don't go back and do things retroactively is a very important liberal principle."

Frank "guaranteed" there would be new regulations forthcoming.

While most people might be offended by Rep. Barney Frank (D-Mass.) saying bonuses are like bribes, House Speaker Nancy Pelosi (D-Cali.) was so enamored with such talk that she actually posted a video of the Massachusetts Congressman's disgusting remarks at YouTube.

As NewsBusters previously reported, during Wednesday's House Financial Services Committee hearing, Frank chastised the CEOs in attendance for having the gall to receive bonuses:

Why do you need to be bribed to have your interests aligned with the people who are paying your salary?

Pelosi obviously wasn't offended by Frank's comments, for she posted a video of his remarks -- in her own name, mind you! -- at YouTube (video embedded below the fold):

Capitalism Derangement Syndrome was on full display during Wednesday's House Financial Services Committee hearing when Chairman Barney Frank (D-Mass.) accused the financial industry executives present of needing to be bribed with bonuses to do their jobs.

That's right: a bonus is now the equivalent of a bribe as far as Frank is concerned.

Given the beating capitalism and the free market have been getting from the press on a daily basis since the financial crisis began in September, it seems a metaphysical certitude that Frank's rant to the CEO's of America's leading financial institutions will get a lot of play in the next 24 hours: 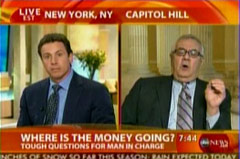 "Good Morning America" news anchor Chris Cuomo on Tuesday actually challenged liberal House member Barney Frank over how Congress has spent the bailout money. At one point, after the host implored Frank to think of the American taxpayers, the irritated congressman commanded, "I'm sorry, sir, but- I'm sorry, if you keep interrupting we cannot have a coherent conversation." Frank would later rage over Cuomo's "distortions."

The ABC News anchor kicked off the interview by observing, "You Democrats say you're gung ho, talking numbers in this stimulus plan." He then skeptically queried, "But, in light of all the spending that's been done already with the questionable results, what gives you the confidence that you can pass this?" Now, it should be pointed out that Cuomo often seemed to be pressing the Democratic congressman from the left. Regarding those Americans who took out loans for more than they could pay back, he asked, "Why didn't you look out for the little guy and make sure that first package, instead of $270 billion to financial institutions, went to the people holding those mortgages?" The host continued, "Went to the working men and women? Why didn't you do that first?" 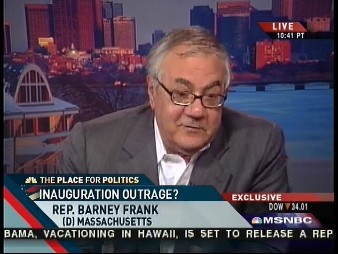 Does Barney Frank think incest is worse than pedophilia?  The question arises because, chatting with Andrea Mitchell this afternoon, here's how Frank reiterated his opposition to Barack Obama having granted Rick Warren the honor of pronouncing the invocation at the inauguration.

But Warren didn't limit his comparison of gay marriage to incest.  In the same statement  in which Warren alluded to incest he also invoked polygamy and pedophilia. 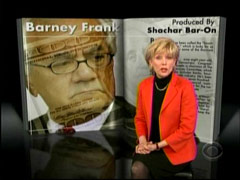 In a softball profile of the liberal Massachusetts Congressman Barney Frank on Sunday’s CBS 60 Minutes, anchor Lesley Stahl led with: "Barney Frank has been called the smartest guy in Congress, which is lucky for us, since he works on some of the thorniest issues around. The 14-term, 68-year-old Harvard-educated Democratic congressman from Massachusetts is chairman of the House Financial Services Committee, which means his portfolio includes banks, housing, and now the auto industry. " Stahl later added: "...even the most hardened Republicans give him good reviews." Stahl never named any of those "hardened Republicans."

Stahl did offer some critical descriptions of Frank: "There are many ways to describe Barney Frank. I wanted to read you a sampling of descriptions of you. They almost -- they kind of come in couplets. We have, ‘impatient and anti-social,’ ‘sharp-tongued and downright mean.’" However, she soon followed up with positive testimonials of Frank’s non-ideological pragmatism:

Listen to what the financial community says. Here's Henry Paulson on Barney Frank: ‘He’s a market savvy pragmatist who looks for areas of agreement because he wants to get things done.’ Here’s a guy from JP Morgan Chase, he said, ‘He hasn't veered off into Crazyland,’ meaning liberalism. I've heard someone describe you this way: ‘You're liberal on social issues; you're a pragmatist on economic issues.’"

Near the end of the story, Stahl observed: "True to form, he's an equal-opportunity curmudgeon, also criticizing Barack Obama for not being assertive enough on the credit crisis." Frank explained: "Senator Obama has said we only have one president at a time. Well, that overstates the number of presidents we have at this time. We don't appear to have any." Apparently, saying that having President Bush is like not having a president is somehow critical of Barack Obama.

Barney Frank favors bailing out the Detroit automakers over letting them go into bankruptcy.  Chief among his concerns is that bankruptcy might "bust" the unions. You know, those organizations whose contract demands have put Detroit on the brink of extinction.

The Massachusetts Dem, chairman of the House Financial Services Committee, was interviewed by Maggie Rodriguez on today's Early Show. He appeared alongside Sen. Richard Shelby (R-Al.), ranking Republican on the Senate Banking Committee, who favors letting the automakers reorganize under Chapter 11.

Can I have permission to utter the S-word ("socialism")?

Ken Thomas's Associated Press report today (link is dynamic, subject to change, and will probably be gone in a week) on auto industry bailout ideas emanating from Washington includes these items, all of which expand soc- ... soc- ... socialism:

Are we having fun yet?

Here are key paragraphs from the AP story:

Just a few minutes after labeling Rush Limbaugh a "terrorist," Joy Behar scolded Bill O’Reilly for calling Obama a "communist." O’Reilly appeared on the October 22 edition of "The View" to promote his new book, but the segment began about the upcoming presidential election. When the Fox News host jokingly called Barack Obama a communist, Joy Behar preached "let’s stop name calling today" and "you know what a red flag that raises."

Barney Frank: 'The Fundamentals Are Better Than the Psychology'

Shades of McCain from an unlikely corner . . .

When at the beginning of the current financial mess John McCain declared that "the fundamentals of the economy are strong," he was roundly lambasted by the MSM, while the Obama campaign called his statement "an enormous mistake."

So, should we expect the liberal media and the Obama campaign to go after Barney Frank . . . now that he has said something remarkably similar? Discussing the markets with Maria Bartiromo on CNBC this afternoon, Frank declared: "I think it's clear that the fundamentals are better than the psychology."