Will Herman Cain ever catch on that certain subjects -- such as the alleged sanctity of Anita Hill's sexual harassment allegations against then-Supreme Court nominee Clarence Thomas -- are no joking matter? (video and audio clips after page break)

ABC's Robin Roberts tossed softballs to Anita Hill on Monday, wondering what the "legacy" will be for the "quiet" law professor who accused Clarence Thomas of sexual harassment 20 years ago. The Good Morning America co-host only once challenged Hill about skepticism of her charges.

Although co-host George Stephanopoulos teased the segment by calling the 1991 Supreme Court nomination hearings "controversial," Roberts' questions didn't indicate that at all. She prompted, "Take us back. What were your emotions?...Are you still angry?" Later, Roberts fawned, "I know there's still many books to be written, but [what's] your legacy?" [See video below. MP3 audio here.]

Anyone reading the Anita Hill puff piece in Friday's Washington Post could see reporter Krissah Thompson was a big Anita Hill fan. But did she also have to be a lazy, handout-accepting Anita Hill fan? The only conservative skepticism toward Hill that the Post allowed were five words from Justice Clarence Thomas's memoir. But they were misquotes.

I have an autographed copy of the book from a Heritage Foundation dinner with the Thomases, and could not find the quotes Thompson used...until I found a New York Times op-ed by Anita Hill from October 2, 2007 -- in the week the Thomas book came out. It was called "The Smear This Time," and Hill misquoted the book. So did Krissah Thompson, copying Hill's misquotes...word for word.

Twenty years ago, Senate Democrats and National Public Radio reporter Nina Totenberg colluded to try and ruin the Supreme Court nomination of Clarence Thomas by promoting the never-substantiated sexual harassment allegations of Anita Hill. If a woman ever claimed Barack Obama talked up Long Dong Silver porn films to her, you can bet it would be seen as an ugly, racist right-wing smear promoted by crackpots. But the liberal media presented Hill as a sober and centrist Saint Anita, not part of a lie-manufacturing left-wing conspiracy. (See Totenberg's activism in our new Special Report as one of the top 20 liberal excesses of public broadcasting.)

Hill strongly denied to the Senate Judiciary Committee that she was making these allegations for her own benefit or that she would be making any hay out of her time in the spotlight. Then at the end of 1993, news broke that she struck a million-dollar-plus book deal with Doubleday. On Friday, The Washington Post's Krissah Thompson filed a report that celebrated "her role" in the hearings, and completely sidestepped whether she was lying her face off.

Uniquely among the broadcast network evening newscasts, the NBC Nightly News on Thursday took a moment to recount an appearance by Brandeis University Professor Anita Hill commemorating the 20th anniversary of her Senate testimony making unsubstantiated accusations against Supreme Court Justice Clarence Thomas for sexually harassing her in the 1980s.

Anchor Brian Williams relayed Hill's contention that "her role in the hearings was worthwhile," before playing a clip of her asserting that her testimony "was not in vain." Below is a complete transcript of the segment from the Thursday, October 6, NBC Nightly News:

Liberal replaces liberal at the top of the New York Times masthead. The paper announced today that Jill Abramson would become the Times’ new executive editor as of September 6, replacing Bill Keller, whose liberal record at the paper Times Watch documented earlier.

Abramson likened the paper to holy writ, telling the Times's Jeremy Peters this morning that being named editor was like "ascending to Valhalla":

"In my house growing up, The Times substituted for religion," she said. "If The Times said it, it was the absolute truth."

Abramson’s bias goes back to her days as a reporter for the Wall Street Journal. Commenting on Bill Clinton’s upcoming inauguration on C-SPAN's Journalists' Roundtable program of January 8, 1993, she enthused:

Yet another case study in how the liberal media never stop pushing their own interpretation of events: In a May 22 This Week roundtable about the arrest of IMF chief Dominique Strauss-Kahn for the alleged sexual assault of a female hotel worker, two journalists endorsed it as France’s “Anita Hill moment,” referring to the last-minute claims raised against conservative Supreme Court nominee Clarence Thomas nearly 20 years ago.

But Hill never alleged that Thomas did anything either violent or criminal —  and polls taken at the time (USA Today, October 14, 1991) showed the public sided with Clarence Thomas over Hill by a nearly two-to-one margin (47% to 24%). Despite the public’s verdict, journalists have never cast the Hill case as that of a politically-motivated accuser engaged in a high-profile act of character assassination.

NBC's Andrea Mitchell, in a piece aired on Thursday's Today about Virginia Thomas' call to Anita Hill, made a point of tying the wife of Supreme Court Justice Clarence Thomas to "conservative causes" but offered no ideological label for Hill. Mitchell also offered two sound bites from Hill supporters, but only featured a brief clip of an old audio-book excerpt from Clarence Thomas expressing sympathy for his wife.

Mitchell did play a clip of Clarence Thomas reading from his book My Grandfather's Son, in which the Justice relayed how the two "shared the pain" during his 1991 Senate confirmation hearings, but then went on to bemoan that this new controversy "interrupted the secluded life Hill now leads at Brandeis University." 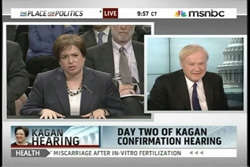 A liberal panel led by MSNBC anchor Chris Matthews injected sexism into the Kagan confirmation hearings on Tuesday morning, suggesting that Republican senators should curtail the tenacity of their questioning because the Supreme Court nominee happens to be a woman.

Despite the absence of a sexual scandal, Matthews persisted with the bizarre analogy: "Are we past the sensitivity about a male member of the Senate grilling a female?"

The "Hardball" host failed to clarify exactly who in 2010 is sensitive about male senators posing tough but legitimate questions to a woman nominated to the nation's highest court. 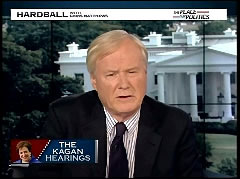 From the morning to the evening Chris Matthews, during MSNBC's coverage of Elena Kagan's hearing on Monday, berated what he saw as GOP mistreatment of Barack Obama's Supreme Court nominee, calling their performance at times, a "brutal assault" and even evoking strange imagery of Kagan having pins stuck in her by Republicans. Early in the day the MSNBC host complained that Republican Senator Jeff Sessions engaged in "a brutal assault on this nomination" by calling her "pro-terrorist" and "anti-military." Matthews also claimed today's hearing reminded him of how Anita Hill was treated by Republicans during Clarence Thomas' hearings as he asked Democratic Senator Dick Durbin:

Some Republicans paid a heavy price for being tough with Anita Hill when she came to testify in the Clarence Thomas hearings. Have we gotten past that era of sensitivity about a bunch of guys going after a single woman here just bashing her?...Can these guys like Jeff Sessions just go at her like this without any fear of rebuke?

Then finally, in the evening, on Hardball, Matthews charged the GOP had turned Kagan "into a voodoo doll, and they keep putting pins in her, as a way of getting at President Obama."

The following exchanges are from live MSNBC coverage (as transcribed by MRC intern Matthew Hadro) of the Kagan hearings and the June 28 edition of Hardball: 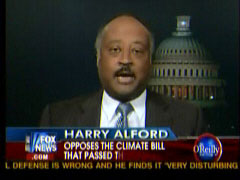 The Sunday Week in Review cover story by New York Times Managing Editor Jill Abramson, "Women On The Verge Of The Law," dealt with the just-concluded confirmation hearings of Obama Supreme Court nominee Sonia Sotomayor, and how things have changed and not changed since the 1991 Clarence Thomas hearings, which also featured the grilling of a minority woman, Anita Hill.

At least that's Abramson's strange take on the hearings: linking Judge Sotomayor with Hill, the law professor and former Thomas employee who accused Thomas of sexual harassment at the hearings that riveted the nation. The story's subhead: "After Anita Hill, a few things in Congress changed. Not all."

Abramson's thrust is that the all-white male Senate Judiciary Committee mistreated Hill and failed to take her anti-Thomas accusations seriously. That should surprise no one, given Abramson's "Strange" history: She is coauthor, with liberal reporter Jane Meyer, of the 1994 book on the hearings, "Strange Justice: The Selling of Clarence Thomas," written when Abramson and Meyer were reporters for the Wall Street Journal.