Time Compiles 'Best Viral Campaign Ads of 2010', Pans Most of the Republican Entries

It was inevitable that someone with enough time on their hands would compile a list of the best viral campaign video ads of 2010. There sure have been some doozies this year, so I can't fault Time magazine for including hits like "Demon Sheep" and the Dale Peterson ad in their top 20 list.

That said, of the 15 Republican ads in the list, most were panned by Time staffers. By contrast, two Democrats' ads -- Rep. Tom Perreillo (Va.) and  Sen. Pat Leahy (Vt.) primary opponent Dan Freilich -- were panned,  yet neither candidate's Democratic affiliation was mentioned in the blurbs about the ads.

By contrast, Democratic Rep. Stephanie Herseth Sandlin (S.D.), who's presenting herself to voters as a fiscal conservative, was praised for an ad featuring her toddler son, and Time's FeiFei Sun cheered Colorado Democratic gubernatorial nominee John Hickenlooper for his "Clean Campaign" in which he humorously promised to eschew negative campaign ads.

'Civil War' Apparently Only a Problem for GOP Squabbling

By Lachlan Markay | August 12, 2010 1:48 PM EDT
There's a phrase that has been conspicuously absent the media's coverage of the recent flap between White House Press Secretary Robert Gibbs and those he dubbed the "professional left": civil war. In contrast, media coverage of Republican infighting consistently pushes the term.

Gibbs is under fire from the left for sharply criticizing liberal critics of President Obama saying that "they need to be drug-tested" and "will be satisfied when we have Canadian healthcare and we've eliminated the Pentagon. That's not reality."

His comments have drawn heated criticism from the left. Democratic firebrand Rep. Alan Grayson, Fla., wants "Bozo the Spokesman" fired. Prominent activist and blogger Jane Hamsher claimed Obama is "having trouble across the board" with liberals. Lefties at the Daily Kos and Democratic Underground were frantic.

Yet almost no "civil war" labels from the media, in contrast to coverage of other instances of intra-party squabbling. The ouster of Dede Scozzafava in the special election in New York's 23rd District earned the "civil war" label 23 times from major media players, according to a Nexis search.

Did you think that, with the perspective that time tends to impart, Alan Grayson would have backed off his unhinged allegation that Republicans wanted sick people to die quickly?  Trick question! I did say Alan Grayson.  On the evening's Ed Show, the dippy Dem congressman from Florida emphatically stated that his ugly assertion, made on the floor of the House, was "the truth."

Grayson was responding to the suggestion by Kurt Kelly--one of the seven Republicans vying for the right to knock Grayson off--that by missing a vote on an allocation of funds for our overseas military, perhaps Grayson wanted the troops to die.  Kelly was clearly riffing off Grayson's earlier allegation.  That didn't stop Grayson from taking great umbrage, claiming that the difference between his assertion and Kelly's was that Kelly was lying whereas he Grayson was telling "the truth." 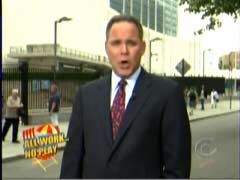 On CBS's Sunday Morning show, correspondent Jim Axelrod filed a report touting the movement in America to make it the law of the land that some employers must provide paid vacation to their employees, even giving controversial Democratic Congressman Alan Grayson - known for making vicious attacks against conservatives – a chance to plug his proposal to make paid vacation, which the Florida Democrat called a "right," legally mandated:

Alan Grayson is adamant that vacation is a right. In fact, he wants to make it a law. ... Grayson wants to guarantee at least one week of paid vacation for every worker at a company with 100 or more employees. He says it will lead to greater productivity from well rested and healthier workers.

Touted as the show’s "cover story" by host Charles Osgood, the segment was teased:

As the subject on the most recent installment of "Real Time" moved to the retirement of Supreme Court Justice John Paul Stevens, the HBO host actually said that it was the Republican Party that has changed in the past thirty or forty years and not Stevens' view of the world.

"You know what's ironic is that you know who's really a moderate Republican by '70s standards?" Maher asked. "Barack Obama."

This stupidity came seconds after guest Richard Clarke actually said that the gun rally in Virginia on April 19 was to commemorate the Oklahoma City bombing (video follows with transcript and commentary, file photo): It was by no means surprising to see Rep. Alan Grayson (D-Fla.) come down harshly on the Florida doctor who posted a sign in his office telling Obama supporters to seek care elsewhere.

What was somewhat shocking was seeing CNN's Anderson Cooper take on Grayson Friday evening when the Congressman accused Dr. Jack Cassell of being racist.

"What he is doing is no different from saying I will not treat a black person," amazingly stated Grayson.

Does Grayson Owe Rather Royalties? Signs Off Fundraiser With 'Courage' 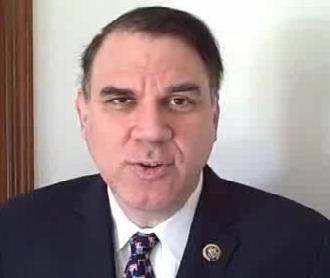 Does Alan Grayson owe Dan Rather royalties for borrowing his famous sign-off?

As a loyal member of the Democracy For America [Howard Dean's old organization] email list, I just received a fundraising message from Grayson.   The Dem congressman from Florida who sprang to national attention with his stunt on the House floor accusing Republicans of wanting Americans to "die quickly" has death on the noggin again.  Excerpt from his money-seeking missive [emphasis added]:

These [health insurers] have decided that if it costs too much to keep a child breathing, then this child will die. They will deploy their lawyers and their accountants, to make sure that this child dies.

Accusing companies of wanting to "make sure that [a] child dies" sounds like it could be libel, but I digress.  Here's how Grayson ends his melodramatic pitch: 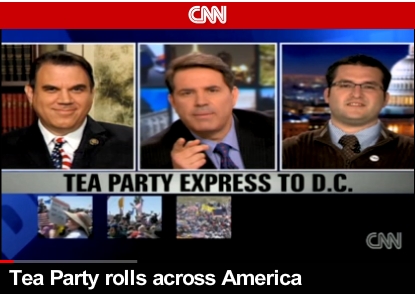 Jordan Marks, the head of Young Americans for Freedom and a Tea Party activist, took on CNN's Rick Sanchez and Rep. Alan Grayson (D-Fla.) Monday and came out looking like the only sane, civil man in the room.

Appearing on "Campbell Brown" to address recent allegations of death threats by Tea Partiers against Congressional Democrats, Marks told substitute host Sanchez, "I think it's a shame that people point to the tea party as inciting ignorance."

When Sanchez challenged him on this point, Marks calmly responded, "I would put them in the same category as the same people that call the tea party organizations or call FreedomWorks or call Americans for Prosperity or Young Americans for Freedom spouting the same ignorance."

As you might imagine, the typically hyperbolic Grayson was having none of this (video embedded below the fold with transcript and commentary, h/t NB readers Reginald Thornton and Patrick Mohan):

Rochelle Riley of the Detroit Free Press recently penned a column so wrought with falsehoods that it is difficult to navigate the ensuing minefield of absurdity.

But navigate we shall...

Riley sets out with a fully sarcastic, yet hearty, thank you to John Boehner, alleging that his fiery speech to the House had contributed to the Democrat's healthcare victory.

"Boehner and many of his supporters - as well as some extremists the party hasn't decided how to handle - faced off against the American people and lost."

It is difficult to comprehend the unmitigated arrogance of liberals as they repeatedly voice that talking point:  The healthcare reform legislation is a victory for the American people.

This simply is not so.  As recently as Sunday, Americans were staunchly opposed to Obamacare by a 54-41% margin according to a Rasmussen poll.  The veracity of their opposition was also overwhelming, with 45% who strongly oppose the plan, and 26% who strongly favor the plan.  If this were an election, we'd be speaking in terms of a landslide.  In reality, it is a landslide defeat for the American people.  For Obama, Pelosi, and their liberal media cohorts to define going against the will of the governed as a victory for the people, is to essentially spit directly into the collective face of this nation.

Sanchez to Grayson: Did You Call Sarah Palin An Alaskan Dingbat? 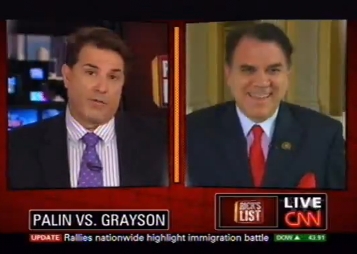 On the day after the historic healthcare reform vote in the House of Representatives, CNN's Rick Sanchez decided to use his interview with Congressman Alan Grayson (D-Fla.) to bash former Alaska governor Sarah Palin.

After spending a few minutes getting the outspoken Floridian's views of what happened in the House Sunday, Sanchez moved on to what he and his producers must have felt was a more important topic: "Let me ask you about something that just went on between you and Sarah Palin. You got into a little bit of a scuffle recently."

Moments later, Sanchez said, "Well, you came back and you called her a 'Alaskan dingbat.' Did you really say that?" (video embedded below the fold with transcript): 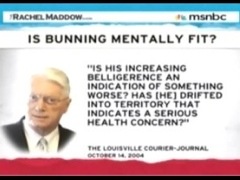 Could Sen. Jim Bunning's desire to pay for extended unemployment benefits with stimulus funds be the result of a serious mental disorder? So suggested Rachel Maddow during her show last night. Maddow based her report on unfouded allegations from a liberal newspaper, and neglected to mention the numerous unstable congressional Democrats that have come unhinged from time to time.

Maddow noted that "even his hometown newspaper has at times questioned his mental fitness," and quoted the Louisville Courier Journal, which in October 2004 asked, "Is his increasing belligerence an indication of something worse? Has [he] drifted into territory that indicates a serious health concern?"

Of course Maddow neglected to mention that Bunning's doctor at the time said his health was "excellent". His campaign manager said the Courier-Journal was spreading false accusations to damage Bunning's election prospects "because he's not a liberal." A political press? Never! (Clips from Maddow's show below the fold - h/t Brian Maloney.)

Matthews Rips Dem Congressman: 'You're Pandering to the Netroots' 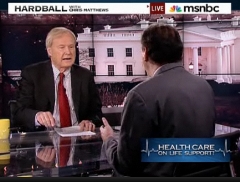 Chris Matthews on Friday accused Rep. Alan Grayson (D-Fla.) of pandering to the far-left members of the liberal blogosphere known as the netroots.

As they heatedly debated the future of healthcare reform on MSNBC's "Hardball," Matthews continually pressed the Congressman over his assertion that Democrats would pass a bill via reconciliation.

"You ever call up a Democratic senator and say, why don`t you do this by reconciliation?" chided Matthews.

When Grayson's answer didn't make sense, Matthews scolded him: "You`re pandering to the netroots right now...Every night, we deal with two worlds, the real world of Congress that has to do things and get things passed, and this outside world represented by the netroots and other people out there, like yourself, who play this game" (video embedded below the fold with transcript, h/t Story Balloon):