Malkin made the point, almost entirely ignored on GMA, that now-defeated candidate Andrew Romanoff was apparently offered administration jobs in order to not challenge the incumbent senator.

Stephanopoulos promptly defended, "Which I should say, [the allegations] were denied by Romanoff and by the White House about whether or not he was offered a job to get him out of the way." [MP3 audio here.]

Malkin then mentioned e-mails released by the Denver Post backing up the claim of job offers. This prompted the former Democratic operative turned journalist to weakly protest, "Well, except he had been going for the job before the campaign began."

Of course, Stephanopoulos and GMA have showed little interest in the subject of Andrew Romanoff's troubles. Other than a brief mention by Jake Tapper on June 3, 2010, the morning show has ignored the allegations of job offers from the White House.

Even though Malkin was on the program to promote the paperback edition of Culture of Corruption, Stephanopoulos focused on potential Republican problems: "[Democrats] believe that when tea party candidates like Ken Buck in Colorado, like Sharron Angle in Nevada, like Rand Paul in Kentucky win, they actually give the Democrats a better chance of winning in November."

It should also be noted that the Malkin segment aired at the very end of the show, at 8:48am EDT.

A transcript of the August 11 segment follows: 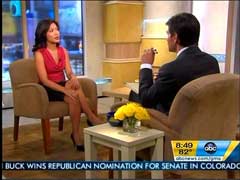 GEORGE STEPHANOPOULOS: Last night's primary results have set the political landscape for the fall campaign. What did we learn about President Obama, Sarah Palin and what may happen come November? Here with her always provocative point of view, Fox News contributor and author of the New York Times number one best-seller Culture of Corruption, Michelle Malkin. Good to see you.

MICHELLE MALKIN: You too, George.

MALKIN: You know, there's no inevitabilities in politics. And I live in Colorado now which, of course, had a bunch of very high-profile primaries. And the White House is patting itself on the back but probably more exhaling with ultimate relief that its candidate in the Senate race, the appointed incumbent Michael Bennet eked through and he faced a very scary challenge from a far left progressive candidate, Andrew Romanoff. And you'll recall that there is a culture of corruption angle to this because this was the race where allegations of attempted bribery, in essence, came up because-

STEPHANOPOULOS: Which I should say, they were denied by Romanoff and by the White House about whether or not he was offered a job to get him out of the way.

MALKIN: Of course. The Denver Post had reported last fall that White House chief of- the deputy chief of staff Jim Messina had approached Romanoff and offered a plethora of White House administration jobs to get him to drop out and Romanoff released E-mails that essentially confirmed that.

STEPHANOPOULOS: Well, except he had been going for the job before the campaign began. But, let's talk about Colorado-

MALKIN: Well, I think the point there though is it's not just conservatives and people on my side of the aisle that are talking about this stench, this culture of corruption that seems to stick to the Chicago team and Obama. This was a Democrat who blew the whistle and he blew the whistle after Joe Sestak came forward and made similar allegations.

STEPHANOPOULOS: You talk about the stench. And there is just no question that all across the country there is a real anger at Washington. But in some ways, you can say it's kind of bipartisan. You talk about Colorado last night, the President's candidate survived. On the Republican side, you had the tea party candidate win the primary against the more establishment Republican figure. I know you're deep in the middle of the Tea Party, Tea party supporter. But how do you respond to what a lot of Democrats believe? They believe that when tea party candidates like Ken Buck in Colorado, like Sharron Angle in Nevada, like Rand Paul in Kentucky win, they actually give the Democrats a better chance of winning in November.

MALKIN: Look, you can look at this as purely from the electoral standpoint or you can look at it if you're a grassroots conservative like I am, and I live out in the west now, I live in Colorado. And we have a longer view about moving the party to where we think it should be. Committed to conservative principles and we were very dispirited during the Bush administration at seeing beltway Republicans capitulate and essentially become big government versions of the people that they say they opposed. And that's what's making 2010 such an interesting period because no establishment Republican is safe.

MALKIN: We saw it in Utah. Bob Bennett is no longer in office because grassroots conservatives kicked him out.

STEPHANOPOULOS: So, are you saying it's better to be pure than to compromise for victory?

MALKIN: Well, that's always been my position as a grassroots conservative. And I think that's what the Tea Party has always tried to say. I was covering the Tea Party movement before it was called a Tea Party movement. And this was in the days around the stimulus debate when it was getting shoved down the American taxpayers' throat and something unfortunately the mainstream media refused to acknowledge that it was a bottom-up movement that could never have been coordinated by beltway Republicans, that they were tired of a lack of corruption. That they were tired of a lack of transparency and the trampling over the deliberative process. And, of course, Obama and the Chicago team and the Democrat majority have been at the center of that. But nobody is immune to that kind of criticism and revolt and that's why these beltway Republicans have been under fire.

STEPHANOPOULOS: So, given that and you say you take the long-term view. Let's jump ahead then to 2012. Who is the potential Republican candidate for 2012 that most embodies the Tea Party principles? Is it Sarah Palin?

MALKIN: Well, certainly she is a favorite and she's spoken at tea party conventions and she embodies this outside the beltway mentality. She gets it. She has an authenticity that I think that a lot of these beltway Republicans and old tired names have been lacking. But, just getting back to the culture of corruption for a moment, we didn't talk about Connecticut where you have this outsider Republican Linda McMahon who easily won against the more establishment candidate Rob Simmons. I think people need to be reminded that the reason that race is happening in the first place is because voters were sick of corruptocrat Chris Dodd.

STEPHANOPOULOS: You know, the computer's going to cut us off. I could talk to you all morning. But, thank you very much. The book is called Culture of Corruption. The paperback is in book stores now. You can read an excerpt on ABCNews.com/GMA.