CNN’s Blitzer to Obama: ‘You Ready to Handle’ the ‘Assault’ from GOP? 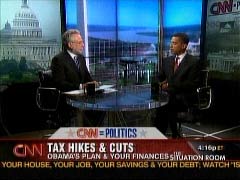 CNN’s Wolf Blitzer, during a much hyped interview of Barack Obama on Thursday’s "The Situation Room," tried to dismiss facts about the Illinois Senator’s as mere opinions. First, the CNN host made a prediction about the upcoming general election campaign: "You know they're going to paint you -- the McCain camp, Republicans -- as a classic tax and spend liberal Democrat, that you are going to raise the taxes for the American people, and to spend money like there's no tomorrow when it comes to federal government programs. You ready to handle that kind of assault?"

In fact, the National Journal - not a conservative magazine - had labeled Obama the most liberal senator during 2007, so if the Republicans do launch "that kind of assault," it has a basis in Obama’s own record in the Senate.

Twelve minutes later, or about 26 minutes into the 4 pm Eastern hour of the CNN program, after discussing the Iraq war with the Democrat, Blitzer brought up the issue of Israel and its battle with Hamas: "This is going to be a huge difference -- the war in Iraq, the fallout between you and McCain. He also is going after you now today, the 60th anniversary of Israel's independence. He says you're not necessarily endorsing policies that would be good for Israel. He says this, for example. ‘I think it's very clear who Hamas wants to be the next President of the United States. I think that people should understand that I will be Hamas's worst nightmare. If Senator Obama is favored by Hamas, I think people can make judgments accordingly.’"

During the Israel portion of the interview, Blitzer failed to mention the fact that Ahmed Yousef, the chief political adviser to Ismail Haniyah, the senior political leader of Hamas, had communicated the terror group’s endorsement of Obama during an interview on WABC radio on April 13: "We like Mr. Obama and we hope he will win the election."