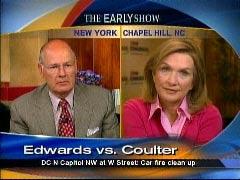 CBS’s "The Early Show" followed the other morning shows on June 28 to basically give free air time to the Edwards campaign. Anchor Harry Smith, who rarely, if ever, gives Republicans or conservatives a free ride, ran a largely softball interview to Elizabeth Edwards and her recent confrontation with Ann Coulter.

At the start, Smith labeled Ann Coulter a "conservative political commentator," but no label in front of Elizabeth Edwards.

The CBS anchor did ask a few mildly challenging questions such as using Coulter as a fund raising ploy, and why she called in and not Edwards. However, as Mrs. Edwards called for "speaking out against the language," Smith did not ask why she did not speak out against the hateful language of her own campaign staffers. Back in February, when questioned by Wolf Blitzer about his anti-Catholic blogger Amanda Marcotte, Edwards dismissed the criticism as coming "particularly from the far right."

Also, notable is that "The Early Show," while pounding Ann Coulter, never mentioned some of Rosie O’Donnell’s extreme statements.

HARRY SMITH: Conservative political commentator Ann Coulter is known for making outrageous comments. This week, she said Democratic presidential candidate John Edwards should be killed in a terrorist assassination plot. We'll explain that more in a second. During a cable talk show, Edwards' wife Elizabeth decided to call Coulter on her comments.

ANN COULTER: How about you stop raising money on your web page then?

EDWARDS: It did not--

COULTER: No, you don't have to because I don't mind --

EDWARDS: It did not start with that. You had a column a number of years ago.

COULTER: The wife of a presidential candidate is calling me asking me to stop speaking?

SMITH: Good to be with you. Let me just explain a little bit. Because Coulter was on a talk show earlier this week, on a morning show. And basically, when she was being asked about this lame joke she had made about your husband earlier this year, kind of an inference about him -- him being gay or something, Coulter comes back and says, well, "Bill Maher was not joking, saying he wished Dick Cheney had been killed in a terrorist attack, so I've learned my lesson. If I'm going to say anything about John Edwards in the future, I'll just wish he had been killed in a terrorist assassination plot." So later in the week then, she pops up with Chris Matthews. I guess you said you were not going to stand still anymore and you decided to call in. What point were you trying to get across?

EDWARDS: Just that we have an obligation to the political process, to our children, that there were a lot of young people listening to that show that day, to Chris Matthews. And we had an obligation to speak out against this change in our political dialogue. It didn't used to be all right for people to call names, to say these hateful kind of things but we've allowed it to happen. And as a participant in the process and as a parent, I objected. I know, you know, I object as a mother. You and John were both fathers of the year this year, congratulations, and I know that you care about the political atmosphere in which your children are raised. I think we have to speak out.

SMITH: What she said then is how can you be making this criticism if you then used some of the sound -- her own words on your website to help raise money? Is there a -- are you applying a double standard?

EDWARDS: Well, I think that we're trying to do is to say we have a choice here as an American public. We can choose this. And we say that this choice is this kind of language. And, yes, we do -- we do show you what it is we're asking you to reject, or you could embrace a campaign of ideas.

EDWARDS: And this is really a call for people to be engaged in the process, either by speaking out against the language, by getting engaged in campaigns, ours or other campaigns, campaigns of substance.

SMITH: The other question that comes up is why didn't John call in?

EDWARDS: Well, you know, I don't know whether -- we've both been dancing as fast as we can at the end of the fund-raising quarter. I don't know whether he heard what Ann Coulter said. But honestly, I wrote a letter -- which I wish I'd sent in 2003, objecting to a column she wrote making fun of the death of Charlie Dean, poking fun --

EDWARDS: -- At the Gephardts and their son's cancer. Making fun of Ted Kennedy and his murdered brothers.

EDWARDS: And poking fun of Wade, my son who died.

SMITH: And enough is enough, alright. Mrs. Edwards, thank you so much. Take care.

SMITH: We'll be back.