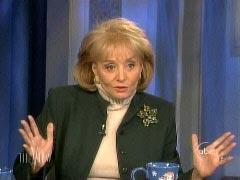 ABC's "The View" cast was split over the President's surge speech. Elisabeth Hasselbeck said "this is the last shot...this better work." Barbara Walters said she was torn, since ABC News employees "try hard not to give our political opinions" [!], and that she wanted to give the new strategy a chance, but wondered about why it mattered that Bush said he took responsibility for the war's mistakes. Rosie O'Donnell and Joy Behar were sharply opposed. Behar said the troops were just "cannon fodder." Rosie whacked at Bush-Cheney: “The armed forces, they are the bravest and the boldest and they're much braver than the men who sent them there to fight this war.”

The sharpest exchange came when Rosie complained that we lost our popularity in the world after 9/11, and Hasselbeck wondered if our "social standing" was so important. Rosie rebuffed: “So it’s about that we're a beacon of light. America, we are a beacon of light in this world. We are supposed to be above this kind of behavior, of invading and occupying." Behar seconded the emotion, and Hasselbeck slapped back: “I don't really care about being liked. I care about being safe.”

They shifted into the debate a few minutes into the show, once the show's opening pleasantries were handled. Behar said the president looked "robotized, a little scared, but Walters made sure Hasselbeck was given the floor: 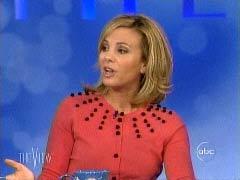 Hasselbeck: “I've been a huge supporter of President Bush. But this is the last shot.  Like, you know, this is seriously the last shot I’m giving you, Mr. President, this better work, this plan. I do feel as though it's a hard decision, and I think it’s, you know, I liken global terrorism, just for me, I feel as though it’s like an incredible infection in the world, and like this strategy is a Z-Pac [a form of the antibiotic Zithromax]. This really needs to work. It's compact. It’s going to be incredibly strong. But I feel as though it's the only option. You know, I don't want to see people killed. I don’t want to see more casualties. But I fear -- so much -- that if we don't take care of this hard and fast, we’re not going to pay the price, we’re going to be gone, [applause] but Grace is going to pay the price. My daughter’s going to pay the price. Your kids are going to pay the price. I just think this is not the most fun strategy. It's like watching my mom when she went through chemo. Did I want to see all her good cells killed with the bad? No. But I knew that that was a means to the end. And I really believe that this is the way that it has to happen."

Rosie: "It makes you feel safer?"

Hasselbeck: Yes, it does make me feel safer. But this is the last shot I'm giving this war.

Barbara Walters:  That's so well-put. Over the years, you've been on with me a little and, technically, my main job, it may come as news, as a member of ABC News, and we try very hard not to give political opinions. But watching him last night, I found myself saying it's going to be such chaos, we keep hearing, if this doesn't work. And I felt, oh, let's just give it a chance. But the other thing that I thought, when he said it's my responsibility, which is what I think he said about Katrina, am I wrong, Rosie? Did he say --

Joy Behar: "Heckuva job, Brownie, is what he said."

Walters: "But he said, at other times, I take responsibility."

Behar: "Has he even read the Iraq Study Group report? Has he listened to his generals?"

Walters: "One assumes he has."

Behar: “But it’s a half-hearted, it's not even a real attempt, in my opinion. It’s just cannon fodder."

Hasselbeck: “Do you agree, then, to more troops?"

Behar: "No, I would not. Look. I'm not one of these people who has to come up with a solution. I didn't start this and I'm not going to finish it. But they have to come up with more creative solutions than just sending 19-year-old boys and girls over there. That's really not going to work." [Applause]

Walters: "Without going through the whole thing, there are other things that are being done, too that maybe they haven't worked yet with the Iraqis and with the Prime Minister. I mean, it was a whole list of things. But I think we all just have to pray that as few casualties as possible. And, as you say, last chance. Let it work." 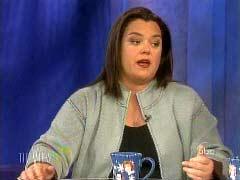 Rosie: "The only thing, the thing that’s is so disheartening, people I know whose spouses are in the Reserve and how many times they've been called. Friends of mine whose husbands have served three times and they're being recalled again.” After others sounded sympathetic notes, she added: “The armed forces, they are the bravest and the boldest and they're much braver than the men who sent them there to fight this war.” [Applause]

Hasselbeck: "You see the strength not only in the troops that are there, but their families that are at home. My friend, whose wife is here, and he’s ready to go again. You see such strength, the grace they possess in seeing their loved ones be there."

Rosie: “And what it does to them emotionally. They come back, you know, different people. If their bodies are whole, their souls and hearts are shattered. And to try and go on from there, as we know after vietnam what happened to a vast majority of the Vietnam vets. So tragic.”

Barbara brought up injured ABC anchorman Bob Woodruff and the family suffering. O’Donnell followed up: “It should be in every situation, the very last thing that is possible to do, war. You should avoid at all costs it until there is no choice. Whether or not that happened this time – “

Behar: “They didn't do it this time.”

Rosie: “Correct. That did not happen this time.”

Behar: Everybody agrees they did not do that –“

Hasselbeck: But everybody at that time, though, in response to what we went through in the country was also in support of being there --

Rosie:  But truthfully, we’ll remember, right after 9-11, everyone was scared to death. The country had never been attacked continentally on U.S. soil. It was a shock to our psyches, to our souls, to the world. We had the world sympathy and support, and now, we do not. And that’s a tragedy, to lose sort of our standing,  to be the leaders of peace."

Hasselbeck: But what's more important, to be, your social standing with the world or to be doing something globally -- 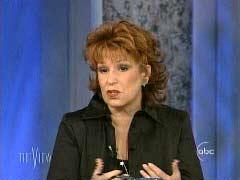 Behar, somehow forgetting Vietnam and global panic over Reagan, that other “cowboy” president: “After World war ii, we were the good guys, and we maintained that for a long time, and now we're losing it, and it's scary and sad to know that you want to go to Europe, and you're not welcome in some of these countries as an American."