Lauer for the Defense: Matt Asks Colorado Teacher "Were You Set Up?" 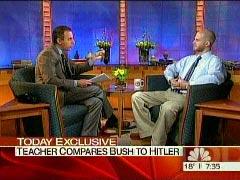 Turns out the real culprit in the Colorado kerfuffle over the teacher who compared Pres. Bush to Hitler is . . . the student who complained about it. Just ask Matt Lauer.

Lauer: "The family here, the student's family, didn't go to the school board with this tape."

Bennish: "They never contacted me." 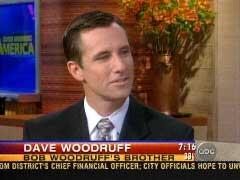 After weeks of sounding peppy about Bob Woodruff's recovery, but leaving out one key sign of normal life, ABC brought on the anchorman's brother David to announce that Woodruff is now talking, even speaking some Chinese and German. The Woodruffs are still very dicey about how long recovery could take, but that's good news. His brother also says he smiled when he told him he still has a face for TV. 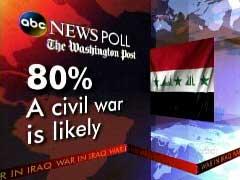 An ABC News/Washington Post poll, released late Monday afternoon, found majority support for a media bete noire, FBI and NSA wiretapping of people inside the United States in the war on terror, but those findings were ignored in the story posted on the Washington Post Web site and aired on ABC's World News Tonight. Instead, both stressed how 80 percent believe “civil war” is likely in Iraq.

After Oscars Flop, Hollywood Asks: Why Did Brokeback Mountain Lose?

Last night's 78th Oscar presentation was the lowest rated show in the last 20 years, failing to break the 40-million mark in viewership. Why? Well, aside from the Hollywood-left’s love affair with anything that cast George W. Bush in the worse possible light, the reason is as plain as the botox in Jennifer Lopez’ lips:

Our man Dickens also discovered that over the weekend on the syndicated "Chris Matthews Show," Time columnist (and Clinton-loving "Anonymous" author) Joe Klein disagreed with Matthews on the artistic and political merit of the Best Picture winner, "Crash":

By Tim Graham | March 6, 2006 9:04 PM EST
MRC's Geoff Dickens reported that in the 9 am half hour of "Today," Katie Couric went mushy for "Crash," a movie even liberal critics disliked for its manipulative (and at times unrealistic) plotting. Couric even mentioned how she liked that her daughter's ninth grade class was shown the fictional L.A.-stuffed-with-racism flick to spur discussion about America's unending race problem.

Matthews on Hillary: "Dukakis in a Dress" 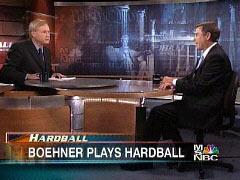 Don't expect to see Chris Matthews and Hillary Clinton dining tête à tête any time soon. On this evening's Hardball, he described her as "Dukakis in a dress."

Orlando Sentinel ombudsman Manning Pynn apologizes for unknowingly exposing incompetence in the Florida school system. In a story that ran last week about how middle-income kids aren't getting what they should from schools, the Sentinel ran a picture of a teacher standing in front of a whiteboard with the word "government' written on it. Except the "r" was missing.

Wouldn't you want to know if your children were in a classroom with a teacher who can't spell 'government'? Not if you're a left-bent journalist covering for the education status quo.

Although that photo had been in the newsroom since it was taken Dec. 14 and had been seen by numerous editors, no one noticed the misspelling until early the morning of publication, well into the press run -- too late to redesign the front page. "We should have caught it," Photo Editor Ken Lyons lamented. He's right, of course. But if editors had caught the misspelling before the presses rolled, should they have substituted another picture? Would that act of seeming compassion have distorted reality and shielded readers from the truth? Yes and definitely not.

The real story here is that public education is a broken system, and journalists deliberately try to frame this story in a way that fuels more money being poured into the broken system rather than in a way to promote vouchers. Why? The short answer is control. When you have a voucher, you choose where you child goes and what they learn to a much larger extent. That is antithetical to journalists who would much rather your child be indoctrinated in a system that rejects God, promotes sex, "alternative lifestyles", and embraces tranny teachers.

Talk about Orwellian double-speak: the AP on Monday called the effort by some law professors to ban military recruitment on their campuses a "free-speech challenge" -- even though it was the law professors who wanted to ban the speech. (Hat tip to NR's The Corner.)

Here are the first two paragraphs of this morning's AP story, as posted soon after on CBSNews.com: 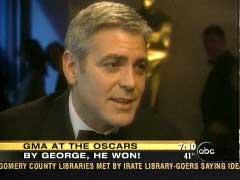 This was a dramatically liberal year for Oscar, but the more political winners at last night's Oscars didn't get pointed questions from the right. The news media's general feeling is to cheer movies for the "social good," and never imagine that the movies could be riddled with errors (Good Night and Good Luck), riddled with profanity (Crash), or just be assessed by critics as a lovably confusing in its conspiracy theorizing (Syriana).

The Washington Times reports on Army Gen. George Casey, the top U.S. commander in Iraq, who says the reports of Iraqi sectarian violence during a ten-day period have been "exaggerated."

Last week’s Associated Press release of a video, taken just prior to Hurricane Katrina’s arrival in New Orleans last August, has generated a new round of second-guessing and finger pointing regarding who is to blame for the supposedly slow, poor response to this natural disaster. Falling under the fold was an in-depth cover story on this subject by an unlikely source, Popular Mechanics.

In its March issue, PM took on virtually all of the media myths and misnomers that were so drilled into the citizenry by press representatives that many have become part of the public psyche. Thankfully, its authors made it clear right in the first paragraph that they planned on pulling no punches:

“In the months since the storm, many of the first impressions conveyed by the media have turned out to be mistaken.”

How mistaken? Well, PM and its staff put together a list of seven myths concerning Katrina that have been purported by the media, and like a good mechanic, quickly isolated the flaws inherent in the press coverage while making much-needed repairs. 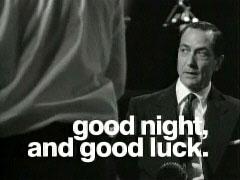 How does the Washington Post tackle the thorny problem of liberal Hollywood being so far out of the cultural and political mainstream? This is a touchy issue for WashPost liberals, since they are living in the same ideological neighborhood and know all the landmarks. One funny way was to avoid the L-word altogether. 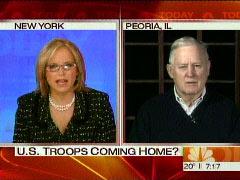 Give Katie Couric a Best Supporting Actress in the MSM production of "Doom & Gloom: the Iraq Story." Interviewing NBC military analyst Gen. Wayne Downing on this morning's Today Show, Couric was skeptical that Iraqi forces would ever be able to defend the country, underlined the view of a "vicious cycle" there, and darkly conjectured that civil war was only "a matter of time."

At the 78th Academy Awards Sunday evening, actor George Clooney won the Oscar for best supporting actor. During his acceptance speech, Clooney admitted that Hollywood is out of touch. However, he said that this was a good thing, and actually had the gall to suggest that Hollywood is responsible for bringing attention to problems like civil rights and AIDS.

In what was a pretty lackluster evening with very little political references, instead of winning the award for best supporting actor, Clooney should have won for the most self-serving, pompous, and inane acceptance speech.

What follows is a transcript of the part of his speech dealing specifically with how wonderful Hollywood is, along with a video link courtesy of Ian Schwartz and Expose the Left.