Mark Levin: 'David Gregory Should Not Get Off The Hook For His Race Baiting'

On Wednesday, Levin ratcheted the discussion up a bit telling Fox News's Neil Cavuto, "David Gregory should not get off the hook for his race baiting" (video follows with transcript and absolutely no need for additional commentary):

The far-left Fox-haters are at it again. In just the past couple of days, we've seen multiple instances of leftist pundits dishonestly bashing the Fox News Channel in yet more attempts to slime the cable news channel.

The latest such attempts caught the attention of cable news blogger Johnny Dollar, who consistently documents the left's growing hatred of everything Fox.

The more notable instance of Fox-hating came from former MSNBC host David Shuster. Shuster took to twitter Thursday to celebrate Canada's rejection of Fox News's application for a broadcasting license. Just one problem: Fox's licesnse was approved in 2004. Called out on the mistake, Shuster deleted his tweet, blocked Dollar, and to date has not issued a correction.

Choosing to defend their colleague, Keith Olbermann and his crack research team on Wednesday incompetently responded with a poorly-researched cherry pick from a July 2009 installment of "Your World" (video follows with transcript and commentary):

Cavuto to Matthews: Stick Your Condescending Comments About Christie's Weight Up Your You Know What

Displeased with the immature condescension aimed at his state's chief executive, Fox News's Neil Cavuto went after the "Hardball" host's lack of decorum on Monday's "Your World" (video follows with transcript and commentary):

It's union thuggery, but at a higher echelon.

Imagine you're representing the AFL-CIO, going on Fox News and trying to make a case that the $787-billion stimulus last year wasn't nearly enough and that more is needed, despite the prevailing argument being that Keynesian economics doesn't work based on this example.

Well, Ron Blackwell - the chief economist for the AFL-CIO faced that on the June 25 broadcast of Fox News' "Your World with Neil Cavuto." Cavuto, asking some honest questions, pressed Blackwell, who was attempting to make the case for more stimulus, as to why the idea of more government spending to help the ailing economy was a legitimate one.

"You're not creating the jobs, with all this money you're wanting us to spend - then why should we keep digging?" Cavuto asked. "What's wrong with saying let's put the shovel down - that's not working?"

It was bound to happen and no one can really blame them for doing so, but someone eventually had to determine who the political winners and losers are for the tragic circumstances surrounding the BP Gulf of Mexico oil spill.

Looking forward to the upcoming election cycle, MSNBC "Morning Joe" host Joe Scarborough determined the time was right to take a stab at it, although reluctantly on his June 2 broadcast.

"[W]e will stay with BP for one second but talk about presidential politics and I know this will be offensive to some people but it's just a reality that there is somebody in the White House, somebody in the Democratic Party, somebody in the Republican Party that's trying to figure out the political impact of this environmental tragedy. And we were talking with Chuck Todd last hour about how it ramps up when the oil starts washing on Florida shores, Chris. That makes this a much bigger political event in terms of presidential politics, like it or not."

Cavuto Strikes Back At Gibbs For His 'Botched White House Presser' 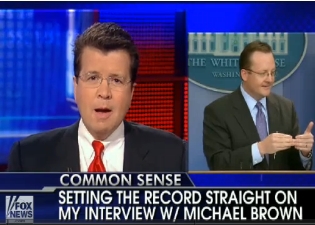 On Tuesday, the White House press secretary took exception with Cavuto inviting former FEMA director Michael Brown on the previous day's "Your World" to offer a conspiracy theory about the Obama administration's response to the oil spill in the Gulf of Mexico.

As NewsBusters reported, Gibbs badly misstated what Brown said during the interview as he chastised Fox's Wendell Goler who had absolutely nothing to do with it.

On Wednesday, Cavuto corrected the press secretary while setting the record straight (video follows with transcript):

A rather strange thing happened Tuesday when Fox News's Wendell Goler tried asking Robert Gibbs a question at the afternoon briefing: he got scolded by the White House press secretary for an interview Neil Cavuto did with former FEMA director Michael Brown the previous day.

To set this up, Brown on FNC's "Your World" said he felt the White House intentionally delayed action on the oil spill in the Gulf of Mexico in order to advance Obama's green agenda.

With this clearly on his mind, Gibbs was armed for bear Tuesday when Goler began his question, "As for critics who are calling this...President Obama's Katrina" (videos and partial transcripts below the fold with commentary, file photo, h/t Hot Air):

There's no question Fox News is killing its competition in the ratings. And the reason is quite simple according to Rupert Murdoch, the CEO of News Corp. (NASDAQ: NWSA), the parent company of Fox News.

On Fox News Channel's May 4 "Your World with Neil Cavuto," Murdoch credited the success of Fox News to the void it fills as people are concerned about the political direction of the nation. He explained with that, his network draws viewers since other networks lean liberal, which is the dominant view of those in power in Washington, D.C.

"Well, I think as Fox News goes, it's very simple," Murdoch said. "You know, it's very powerful, it's very good and it's very balanced. And you know, everybody else, every newspaper, every - maybe an over-generalization, but by far the most newspapers and certainly the other television networks sort of are all on one side, the liberal side of things and we're - I think the population of this country is pretty worried about its direction and they turned to Fox News."

"Your World" host Neil Cavuto asked Murdoch if he welcomed those critiques on Fox News, to which Murdoch admitted he did because it was good for ratings.

If you try to sweep your problems under the rug, they'll go away, right? Michael Mann, a Penn State professor and a central figure in the Climategate scandal and best known for his "hockey stick graph" hopes so.

On Fox News Channel's April 28 broadcast of "Your World with Neil Cavuto," Elmer Beauregard of Minnesotans for Global Warming appeared to explain the reasoning behind a video that drew the ire Mann. The video mocked the Penn State professor's alleged attempt to cover up data from tree rings that would indicate there was no global warming.

"Well, I don't know if you remember, but last fall, Obama was pushing the no cap-and-trade to go through the Senate because he wanted to have something to bring to Copenhagen," Beauregard said. "And just then Climategate broke and the mainstream press really wasn't covering it, so the coalition got together and we tried to think of a way to kind of bring this into the forefront of the American public. And I said I could make a funny YouTube video. And so, I did it to the tune of ‘Draggin' the Line' by Tommy James and The Shondells and put it up on YouTube and it went viral. And then Rush [Limbaugh] played it on his show and it went supernova."

By Ken Shepherd | April 19, 2010 5:24 PM EDT
The political inclinations of Hollywood actors, when they're publicly disclosed, are almost always reliably left-of-center. As such, it's quite refreshing to learn of another conservative or libertarian in Tinseltown, especially when the celebrity in question is actively working to advance an understanding of constitutional principles and opposing big government.

You can watch the full interview by clicking the play button on the embed at right or listen to the audio by clicking here for the MP3.

Time after time, the Obama White House has demonstrated a desire to control the message and flow of information, whether it's issues on health care, the economy, bailouts and the latest - climate science.

With cap-and-trade legislation waiting in the wings that would come at an estimated cost of up to $200 billion, or $1,761 per household, according to the Treasury Department, the federal government recently announced a new service to "help businesses adapt to the impact of climate change."

But AccuWeather.com's chief long-range and hurricane forecaster Joe Bastardi, who appeared on the Fox Business Network's Feb. 9 "Cavuto," warned there are other implications with the government having an expanded role in climate forecasting. According to Bastardi, it could lead to an effort to shut out other opinions.