CNN International’s Hala Gorani couldn’t fathom why a Palestinian terrorist organization wasn’t invited to the upcoming Middle East peace conference in Annapolis, Maryland. Following-up to an answer made by State Department spokesman Michael Pelletier during an interview, Gorani exclaimed, "How can you have a Middle East peace summit that doesn’t include Hamas? Forget whether or not you don’t like them as a group, or call them terrorists. How can you not?"

Gorani asked the question 18 minutes into the 12 pm "Your World Today" program on Monday, which is simulcast on CNN. Gorani began the interview on a bit of a skeptical, even hostile note, and she acted as if she should be the one directing the negotiations. After her initial question and the answer from Pelletier, Gorani shot back with the following point. "You have two very weak leaders. The Palestinian isn't even representative of his entire population. Ehud Olmert is the least popular Israeli prime minister, practically, in history. George Bush won't be in office in 13 months' time. Why would anything come out of this?"

CNN viewers on Friday saw a relatively rare acknowledgement of those who are skeptical of Al Gore's film "An Inconvenient Truth," including a British judge who recently ruled that there are nine inaccuracies in the movie. But CNN's Miles O'Brien dismissed the views of dissenters, and downplayed the importance of the errors cited by the judge.

As he made several appearances on various CNN shows on Friday, O'Brien tagged dissenters with such labels as "dead-enders," a "tiny fraction of a minority," and a "very small fringe," as he linked skeptics to fossil fuel companies. He also repeatedly declared that the scientific debate on global warming is over. Notably, on the July 20 "The Situation Room," O'Brien had curtly lectured former Republican Congressman J.C. Watts with similar comments on the subject. O'Brien: "You're not paying attention to the science, J.C. You're definitely not paying attention. ... The scientific debate is over, J.C., we're done." (Transcript follows)

Assume for a moment that a new study by NASA proved beyond a shadow of a doubt that manmade global warming was indeed responsible for the recent ice melts in the Arctic. Think media would have reported it?

In reality, that's a bit of a trick question, for in the past several weeks, television newscasts, papers, and magazines have been filled with hysterical assertions about decreasing Arctic ice levels destined to cause imminent flooding to coastal regions around the world.

As such, it certainly was no surprise when NASA released a report Monday claiming "the rapid decline in winter perennial ice the past two years was caused by unusual winds," virtually no media outlets shared the information with the citizenry, and those that did still blamed the melting ice on - you guessed it - global warming.

The largely boycotted announcement out of NASA stated no such thing (emphasis added): 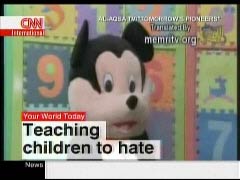 "Recruiting the next generation of militants. A Mickey Mouse-like character reaches out to Palestinian children."

That's how CNN's Jim Clancy, co-host of "Your World Today" teased a May 9 story about the infamous rodent that hosts an Hamas-funded TV show geared towards little children. (see related NB post here) 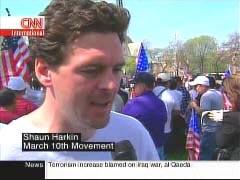 Surely, CNN doesn’t stand for Communist News Network. But CNN’s Soledad O’Brien went looking for the "grass roots" of the pro-illegal immigration movement in Chicago during Tuesday’s Your World Today at mid-day. She interviewed a man she described as "Shaun Harkin of the March 10th Movement." She did not describe him with ideological precision: he’s a fervent Leninist. 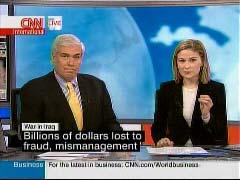 Books, not bombs? Like a golden oldie from the Reagan Eighties, CNN’s Tom Foreman forwarded the classic liberal claim on Monday’s (noon Eastern) "Your World Today" show that the Iraq war is so costly that it could have been better spent on hundreds of grade schools or millions of new teachers, new cargo inspectors, and new cops -- or "every American driver could get free gasoline for a year."

On the day after President Bush announced a troop surge in Iraq, CNN chose to commemorate an odd "anniversary." As of January 11, it has now been five years since the first terrorist suspects arrived at Guantanamo Bay, Cuba. The cable network’s "Your World Today" program used this date to highlight the "allegations of mistreatment amounting to torture" at the facility. On Thursday, the hour-long show featured two segments and a news brief on the subject, all heavily focusing on how the camp could be shut down, not whether it should be closed. After an intro piece on the history of the camp, anchor Hala Gorani interviewed Human Rights Watch Executive Director Ken Roth and began her questioning with this loaded lead-in:

At the conclusion of CNN’s "Your World Today," which features an international take on the news of the day, anchors Stephen Frazier and Rosemary Church read a variety of e-mails on North Korea’s testing of nuclear weapons. Only in the morally relativistic world of CNN, where all opinions are equal, could a letter like this repeated aloud:

Church: "And a completely different view. Soh, from Singapore writes: ‘The North Koreans have done the right thing. Since the end of the Korean War, they have been subjected to hostilities from the United States. and other western powers. This bomb is a source of tremendous pride for the Korean people, north and south. The world should congratulate the North Korean people for this achievement."

One can imagine a 1930s CNN reading German e-mails congratulating Hitler on his triumphant liberation of Poland.

By Jack Engelhard | August 8, 2006 12:44 PM EDT
NewsBusters contributor Jack Engelhard incorrectly thought he received an email from CNN anchor Jim Clancy. This did not occur. NewsBusters retracts this story and apologizes to CNN and to Jim Clancy for this false assertion. 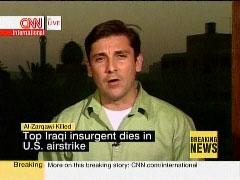 As they do every weekday at noon, CNN’s American viewers were switched over to the CNN International network’s “Your World Today,” a show so far to the left that it makes the rest of CNN look like a Norman Rockwell tribute to the greatness of America. Today, during coverage of the U.S. military’s successful elimination of terrorist Abu Musab al-Zarqawi, the CNNI caption referred to him as a “top Iraqi insurgent.”