On Sunday's MediaBuzz show on Fox News Channel, host Howard Kurtz gave a commentary in which he highlighted recent media double standards on the issue of whites wearing blackface, including the firing of Megyn Kelly from NBC's Today show simply for mildly defending the practice, when several prominent liberals affiliated with NBC and in other places have openly done routines in blackface in the not too distant past.

After stumping for Hillary Clinton with some of his fellow cast members from the former NBC show The West Wing, actor Bradley Whitford joined the Thursday edition of MSNBC’s Hardball to assure viewers that Hillary Clinton’s “motivation for her entire professional life has been to speak out for children, for women's rights, civil rights, rights for people in all communities.”

Former West Wing actor Bradley Whitford appeared on MSNBC, Tuesday, to assure Americans that fictional ex-President Jed Bartlet is supporting Hillary Clinton. Quizzed by Steve Kornacki, the TV star endorsed by proxy: “There's no doubt in my mind that Hillary would be President Bartlett's choice. She's —  nobody is more prepared to take that position on day one.”

Entertainment Weekly Wonders: Why Are TV Conservatives so Liberal?

Why is it that conservative characters on prime time television, what few of them there are, almost always end up "evolving" into fuzzy liberals? "Entertainment Weekly" columnist Mark Harris asked that very question in the current issue of the media magazine [Emphasis added]:

Tonight (Sunday, May 14 at 8pm EDT/PDT, 7pm CDT/MDT) NBC will air the final episode of The West Wing.

By Greg Sheffield | May 10, 2006 1:05 PM EDT
The AP reports that NBC didn't even want to pay for a nostalgia piece about its low-rated liberal-themed presidential drama "The West Wing."

When NBC announced in January that it was canceling the political drama after seven seasons, it said the final episode in May would be accompanied by a retrospective on the series' history.

A Hollywood star from Wisconsin is apparently less embarrassed by Canada than by the United States. On Friday night's Real Time with Bill Maher on HBO, actor Bradley Whitford, who plays “Josh Lyman” on NBC's The West Wing, related how he “just had a friend who went to Europe and I gave her a Canadian flag to put on her bag.” Whitford declared that the U.S. policy in Iraq “has desecrated” the American flag since we are “treating the rest of the world with contempt, dropping bombs on people who don't need bombs dropped on them” and “killing civilians...based on an assumption that an Iraqi life is worth less than ours. It's obscene." Earlier, Whitford contended: "There's no military, conventional military solution to terrorism. If there were, Israel would be the safest country in the world.” (But if Israel didn't use their military, would Israel still exist?) Turning his anger on the Bush administration, the actor who on The West Wing plays the Chief-of-Staff to “Democratic President-elect Matt Santos,” charged: “I think the whole approach by these bungling, violent, violence-addicted people in this administration, it's like the Polish joke: You lose your ring in the dark and so you look for it where there's light, where you know how to do it." 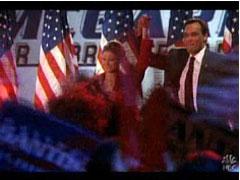 It should surprise no one that the Democrat won the fictional presidential race on "The West Wing," which is set to be cancelled. But the show's writers insist it has nothing to do with the fact that none of them is Republican.

Lawrence O’Donnell Suggests Bush Should Learn From “The West Wing”

At the Huffington Post yesterday, MSNBC’s Lawrence O’Donnell stated that President Bush, who is rumored to watch reruns of the television program O’Donnell is the executive producer for, should be watching recent episodes of NBC's “The West Wing” to learn how to deal with problems in his own