On Monday's Joy Behar show, the host promoted the latest work of liberal actor Richard Dreyfuss, but soon turned the conversation to Dreyfuss playing Dick Cheney in the 2008 Oliver Stone flop "W." and how he could find the "satanic spot" in his soul to play Cheney. Dreyfuss said you can "find all the villainy in the world in your own heart," and said he tells students to focus on the Hitler inside you when playing a bad guy. Cheney as Hitler: this is just another night on the Joy Behar Show.

On Sunday, Alana Goodman reported on an anti-semitic interview given by director Oliver Stone in the Sunday edition of The Times of London. Stone said that Jews dominate the media, "stay on top of every comment" and have "the most powerful lobby in Washington."

Earlier today, The Daily Mail reported that Stone had apologized for his remarks.

He said: "In trying to make a broader historical point about the range of atrocities the Germans committed against many people, I made a clumsy association about the Holocaust, for which I am sorry and I regret."

Stone told The Sunday Times "Hitler was a Frankenstein but there was also a Dr Frankenstein. German industrialists, the Americans and the British. He had a lot of support." 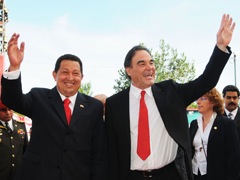 There has been a substantial push lately by some of Hollywood's big names to reeducate Americans on world history. The leftist-dominated television and film industries have taken it upon themselves to promote histories of the United States and its role in the world that portrays it as an evil, occasionally colonial, always destructive force in global relations.

The latest such effort is being undertaken by director Oliver Stone, well known for his loving portrayal of Venezuela's Marxist dictator Hugo Chavez and derisive portrayal of our previous president in "W". Now Stone has set his sights on Adolf Hitler and Joseph Stalin. He plans to "liberalize" America's thinking regarding two of the 20th century's most murderous dictators by putting them "in context", whatever that means (h/t Hot Air headlines).

"We can't judge people as only bad or good," Stone said at the Television Critics Association's press tour, referring to two dictators who--unless this writer's understanding of history is not sufficiently "liberalized"--are responsible, in Hitler's case, for the extermination of 6 million Jews and 3 million others in killing camps during World War II, and in Stalin's, for the murders of 20 million individuals in Russia and Soviet-occupied Europe.

It seems, Stone's claims notwithstanding, that one is historically justified in classifying these two particular dictators as "bad".

This is a story of hope and reality. First the hope from Bloomberg News 10 days ago with the very hopeful title of Oliver Stones' W May End Political Films' Drought:

Ah, the good old days. Remember way back when filmmaker Oliver Stone lamented about his even handed portrayal of George W. Bush in his disappointing new hit piece, W?

"I tried to be fair and balanced and compassionate," Stone said. "I don't take sides. I don't take political sides. I'm a dramatist, and this is the movie I've made."

Yes, that was way back on October 12th, barely a week ago.

Now however, it appears being fair and balanced means comparing the President to someone like, say, Adolf Hitler.

Entertainment Weekly's Joshua Rich reported on the weekend's box office returns for the latest releases on October 19 to let us all in on Hollywood's successes and failures, because, you know, Hollywood is important and all. We find that the Chihuahua movie is still going like gangbusters ($70 million in three weeks) and the horrid movie "Max Payne" led the weekend's receipts with $18 million. Oliver Stone's slamfest "W," though, earned a disappointing fourth place on its debut weekend.

But, Rich’s excuse is a claim that even Entertainment Weekly itself has recently disputed, at least as far as the box office goes. Only a few weeks ago, the weekend that right-wing comedy "An American Carol" debuted, the same Box Office Report column said that the "economy may be tanking, but the box office remains healthy, with probably the only year-on-year metric that's seen an uptick."

Finally a movie review that takes on Oliver Stone's "W." on its cinematic merits or rather the lack thereof.

The film critic -- who gave the film just one and a half stars -- cracked that the script sounded like recycled Maureen Dowd cartoons and scoffed at the "uneven pleasure" of seeing "first-rate" actors portraying political figures they "don't respect" (emphases mine):

Its shortcomings are remarkably similar to those of its major characters. Near the beginning, Donald Rumsfeld ( Scott Glenn) proclaims that he doesn't do "nuance." Neither, alas, does Stone.

Richard Lewis: 'Constitution Has Been Trampled the Last Eight Years'

Another celebrity uses the same tired line that Bush has trampled on the Constitution. This time it is Richard Lewis pontificating on the October 17 edition of "The View." Calling for Americans to get out and vote Lewis also blamed "fundamentalists" for America’s demise.

"The Constitution has been trampled the last eight years, period. This is not what this America is supposed to be for. I have friends if they’re pregnant and they don’t want to have a child, I go ‘oh God I respect that.’ It’s the reverse. It’s the- this country is a reasonably great country, about 85 percent, I’m just making that up. It’s the fundamentalists that are screwing this up. I think it’s the, I think it’s the- the comedy will mean nothing."

Earlier in the show, Joy Behar, bizarrely hypothesized that Republicans are "all blondes" "except for Sarah Palin" (Behar is obviously forgetting Laura Bush) The segment then led the panel to address the rumors that Elisabeth Hasselbeck is leaving "The View" for Fox News. Hasselbeck denied such rumors declaring "I certainly love my ladies here. I’m not going anywhere." 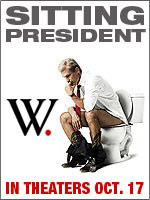 A Web ad for the Oliver Stone's latest political bio-pic "W." features actor Josh Brolin as the title character seated on a throne.

The "Today" show has yet to promote the conservative satire An American Carol, that spoofs Michael Moore but they did find time to invite on Josh Brolin to plug Oliver Stone’s George W. Bush biopic W. on Tuesday's show. Co-anchor Matt Lauer interviewed Brolin, who plays the title character, and noted critics were expecting "a political hatchet job" of the President, to which Brolin, defended Stone as he claimed the controversy surrounding the director of such factually murky films like JFK and Nixon, was "hogwash."

However Brolin admitted that one of the reasons Stone tabbed him to play Dubya was because there was something sort of "mean" about the actor. And in describing how he perfected his Bush impression Brolin observed there was an "apish quality," about the 43rd president.

The following is the full segment as it occurred on the October 14, "Today" show:

As part of the promotion of his new Bush-bashing drama ‘W,’ director Oliver Stone appeared on Tuesday’s CBS Early Show and co-host Harry Smith gushed: "And there are so many interesting portrayals in this, we don't have time to go into them all...Stunning, stunning, stunning ...Phenomenal, phenomenal stuff." Smith even suggested that some people saw the movie as sympathetic to Bush, though not Smith himself: "People -- I was in a screening of this movie just yesterday. This person was walking out, 'my gosh it seemed so sympathetic.' I didn't feel that way, but your hearing that yourself I'm sure."

I hear it but I think there's a confusion between sympathy and empathy. Empathy means understanding, and as a dramatist it's my job to understand, to walk in the shoes of George W. Bush as best as I can...Sympathize, no. I do think he's hurt this country. I'm a Vietnam veteran. We should not have gone into the Iraq war. We were in three wars, not only Afghanistan and Iraq, but really the war on terror is a major war. You know, we've had an economic meltdown because of it, partly because of the overreach. And this country is in a very dire place and I'm not happy about it...But, you know, people voted for him.