“OMFG” is text-speak for the unspeakable. It's also the tag line for a new ad campaign aimed at teens and featuring a jumble of sexual situations, including teens undressing each other and two girls kissing. The campaign blitz is appearing in print and television, all aimed at drumming up eyeballs for the CW network's teen-themed soap "Gossip Girl."

For the uninitiated, “OMG” translates to “Oh My God” in the language of email and text messaging. The addition of the “F” means … well, it’s the word that can cost broadcasters a hefty government fine if someone actually says it on TV.

Now, of course, executives at the CW could never admit that they were actively targeting teens with such a "provocative" ad. Nor would they ever admit they were intentionally dodging an FCC fine by using the letter "F" instead of the unspeakable word. Nor would they ever consider that "F" used next to "G," which stands for "God" would be blasphemous. In fact they've gone out of their way on these subjects. But reality has a way of well, keeping it real.

Robert F. Kennedy Jr. wants to ‘abolish’ carbon usage and sees a direct comparison to the end of slavery.

According to Kennedy, “industry and government warnings” about avoiding “economic ruin” should not be heeded because abolishing slavery did not cripple the British economy as was predicted “Instead of collapsing, as slavery’s proponents had predicted, ’s economy accelerated,” he argued. Here's how he put it:

In Spring of 2007, magazines such as Vanity Fair and Elle offered readers ways to "green" their lives and help the environment. Now, the April issue of Glamour brings readers another "57 Little Ways to Save the Planet."

Announcing "Mother Earth needs our help," the article begins by accusing "we use too much fuel (which causes pollution), chop down too many trees, conserve too little water; toss too much waste into landfills."

Glamour tells readers it has consulted its "panel of experts" and come up with the best small ways to fight "these major problems." Of course, Glamour's "panel of experts" is comprised mostly of members of radical left-wing environmental groups such as the Sierra Club, Natural Resources Defense Council, and the Center for Science in the Public Interest.

I bet you can't say the following without laughing hysterically: the media were much kinder to George W. Bush during the 2000 election campaign cycle than Vice President Al Gore.

As absurd as this statement might seem, such was the premise of an article in October's Vanity Fair written by contributing editor Evgenia Peretz and marvelously entitled "Going After Gore."

In it, Peretz - apparently with a straight face - claimed: "The New York Times, The Washington Post, and other top news outlets kept going after [Gore], with misquotes (‘I invented the Internet'), distortions (that he lied about being the inspiration for Love Story), and strangely off-the-mark needling, while pundits such as Maureen Dowd appeared to be charmed by his rival, George W. Bush."

Makes one wonder what the color of the sky is in Peretz's world. Regardless, for your entertainment pleasure, here are some of the absolutely hysterical lowlights (emphasis added throughout): 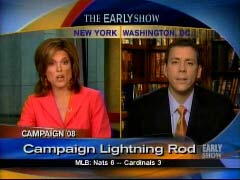 Republican presidential candidate Rudy Giuliani has received plenty of flak from both the Left and the Right for various reasons, but CNN's "American Morning" on Wednesday spent more than six minutes discussing an article critical of Giuliani's wife in the latest issue of the left-wing glossy magazine "Vanity Fair." Co-host John Roberts interviewed the author of the article, Judy Bachrach, as well as got a response from Giuliani friend and campaign aide Randy Mastro. In addition to this, "American Morning" ran a segment from "Anderson Cooper 360" political reporter Tom Foreman on Giuliani's criticism of the universal health care proposals of several Democrat presidential candidates. Foreman, using an overexcited tone in his voice, compared Giuliani to Tony Soprano, and portrayed Giuliani in a pretty unflattering light. (see more including transcript after the jump)