In an article Wednesday about organized labor's legislative goals for the 110th Congress, USA Today's Sue Kirchoff mischaracterizes a law that would move the union organizing process away from secret-ballot elections, and makes it sound like an improvement in representative government (bold is mine):

The AFL-CIO ..... is looking ahead to a second bill that sponsors call the "Employee Free Choice Act."

With President Bush presumably about to announce a surge of troops into Iraq, what better time for CNN to run a segment . . . likely to put a damper on recruiting? In theory, there was nothing wrong with a segment aired at 10:30 ET this morning, geared to providing useful information to potential recruits.

A Side of Outsourcing You Won't Hear From Lou Dobbs

Outsourcing and the Internet are helping "microbusiness" owners to thrive, USA Today reported in a recent edition. That’s funny. As Lou Dobbs would have us believe, outsourcing does nothing but turn middle class Americans into economic cannon fodder for major corporations.

"Competitiveness, productivity, and efficiency are nothing more than code words for 'cheaper labor,'" Dobbs complained in the "Exporting America" chapter of his latest book "War on the Middle Class."

By "finding cheaper labor all over the world," major corporations have created a level playing field all right, "they obviously mean to cut the American standard of living down to the level of the third world," snarked the Harvard-educated business anchor.

"Fed up with rising labor costs, a new generation of entrepreneurs is launching millions of tiny companies" without hiring any full-time employees. At some 20 million workers they comprise one-sixth of the civilian non-government labor force, USA Today reporter Jim Hopkins noted in his December 11 Money section story.

Failure to Launch: Media Hype Epidemic of 20-Somethings Living with the Parents

Another exasperating storyline from the MSM: the economy may be just fine overall but its screwing over 20-somethings who have to live with mom and dad.

My colleague Dan Gainor wrote up a review of the media's reheating the tired old storyline:

In the November 26 “World News Sunday” story “Young & in Debt,” anchor Dan Harris talked up the story about twentysomethings “forced to move back in with their parents.” ABC and USA Today each told stories of young men and women facing mountains of debt from school, credit cards and more.

Rather than focus on how self-made those debt mountains were – up to $165,000 in the USA Today story – both reports dwelled on how twentysomethings were “struggling to pay” for their living expenses.

ABC’s John Berman introduced viewers to Todd Townsend, who moved in with his mother because of $50,000 in debt, "mostly from student loans." "But he's not living there because he wants to," Berman said. He then explained to viewers the horrors of that choice, including living in two bedrooms next door to one another and even sharing a bathroom. "You share a bathroom with your mother?" asked Berman incredulously.

Berman wasn’t finished. "Moving back home can provide some financial relief; you get free food and laundry. But there are some pretty serious drawbacks." According to Townsend, who didn’t like to admit he lived with his mother when he met women, "it's not sexy."

If it's that unsexy, why go on national TV so even more young women know the answer to "my place or yours?"

In a fitting Veterans Day tribute, this morning’s USA Today recognizes America’s “21st Century Heroes,” a relatively small group of U.S. military servicemen who received our country's highest honors for their valor in Iraq and Afghanistan.

This morning’s USA Today story, by Gregg Zoroya and Oren Dorell, helps restore some much-needed balance. “As the nation observes Veterans Day, America is witnessing a new generation of combat heroes from the battlefields of Afghanistan and Iraq," they write. The front-page of the paper carries a November 2004 photo of Marine Sgt. Maj. Bradley Kasal being carried out of a firefight in Fallujah, where his heroism earned him the Navy Cross. An excerpt:

USA Today Buries Critical Finding in Article About its Own Poll

Imagine if you will that a month ago, a major newspaper, in combination with a major polling organization, had pronounced that the Republicans were ahead by 23 percentage points in voter preference for the upcoming midterm elections. Further imagine that just two weeks ago, this lead had been trimmed to thirteen. And, just for argument’s sake, with two days to go before the pivotal elections, the Democrats had cut this lead to only seven points. Do you think the opening paragraph in the article on this subject by this major, left-leaning newspaper might address this?

Well, USA Today just posted an article at its website (hat tip to The Strata-Sphere) concerning a new poll done with the Gallup Organization (this author is waiting with baited breath for the full results to be published!), and the most important finding of the survey didn’t come until the sixth paragraph (emphasis mine): “What's more, President Bush's last-ditch push for votes and Sen. John Kerry's comments that seemed to denigrate the education level of U.S. forces in Iraq have helped energize GOP voters. A Democratic advantage of 23 percentage points a month ago and 13 points two weeks ago is now down to 7.”

Instead of leading with that important information, the reader had to wade through the following: 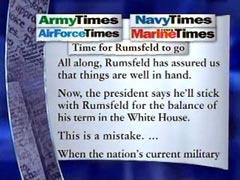 On this morning's Meet The Press, Tim Russert tried to pass off the editorial in the "Army Times" and sister publications calling for Donald Rumsfeld's noggin as having some special significance.  RNCC Chairman Tom Reynolds didn't let him get away with it.

In another grand example of "journalistic" integrity, USA Today has declared the Iraq war a total failure even as we are still in the middle of it all. With that "truth" reported, I'd like to have their crystal ball to get the next lottery numbers, too.

“The John Kerry flap may have been the major political story yesterday, and even today,” Brit Hume accurately noted in his Wednesday “Grapevine” segment since, indeed, the ABC, CBS and NBC evening newscasts led with it both Tuesday and Wednesday night. But he observed, “you might not have known that from the newspaper coverage. Not a single front-page headline in the New York Times, Washington Post, Wall Street Journal or USA Today. The Times cast it as a chance for the President to attack Kerry. Not until the 15th paragraph, on page 18, does a reader learn what Kerry actually said.” Hume also picked up on how ABC framed the story: “On ABC News, the Kerry flap was described as quote, 'an object lesson in how in this day and age an idle political remark gets seized upon.'" A late Tuesday night NewsBusters posting, "ABC's Gibson: Kerry's Dumb 'Get Stuck In Iraq' Merely an 'Idle Political Remark,'" distributed in Wednesday's MRC CyberAlert, highlighted the characterization by World News anchor Charles Gibson.

And Hume relayed how ABC News Political Director Mark Halperin, on the Hugh Hewitt's radio show, “says well over 70 percent of the people working on his network's political coverage are liberal, and would vote Democratic.”

My full story can be found here.

Can't be because this is 6 days before an election, right?

At any rate, it seems even a liberal pundit cited in the cover story isn't falling for the Lou Dobbs lament that the halcyon days of the middle class are behind us:

Major Newspaper Headlines Drain Drama Out of the 'Kerry Kalamity'

While some tabloids capture the drama of John Kerry's uneducated-people-stuck-in-Iraq joke ("KERRY KALAMITY," says the New York Daily News), the nation's biggest newspapers have headlines draining the drama out of the story, and certainly leaving the contents of the "joke" out of the headline:

Boy, it didn’t take long for Katie Couric to go from media darling to whipping girl, did it? You’d think the perky one did something really obscene, like stating that she was voting for a Republican in the upcoming midterm elections.