Cam Edwards at NRANews.com offered something interesting to add to the Geoff Dickens list of Matt Lauer's frequent episodes of anti-gun bias. In August 2000, Lauer interviewed Knoxville, Tennessee auto dealer Greg Lambert about how apparently outrageous it was that Lambert offered guns as part of his car sales pitch. (I break down laughing when Lauer says "Even children who come to your dealership are going to get a free water pistol, and some people say that's just going too far.") 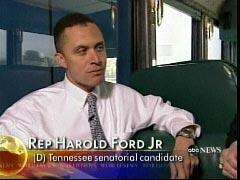 Newsweek's cover story this week about Rep. Harold Ford. Jr is illustrated in the Table of Contents by a dramatic black and white picture of Ford glancing heavenward in a church under the headline "Racing to the Center." The Ford cover story by Jonathan Darman, framed by an enormous photo of Ford's head taking up two glorious pages, began with 300 people coming out of the darkness to hear "Ford praise the Lord and lecture man" at a historic hotel, as people sang "Amazing Grace" and shouted Hallelujah. "'I love Jesus, I can't help it,' the congressman tells the crowd." On page 33, there's a half-page photo of Ford bowing his head  and joining hands with staff in a prayer before a debate. Nowhere, in this 3,944-word story is any mention of this fervent Christian attending that 2005 Playboy-bunny party in Jacksonville on Super Bowl weekend.

Don't think it's because Newsweek was flat-footed and unaware. In the March 27, 2006 Newsweek, Darman related those nasty Republicans were going negative early: