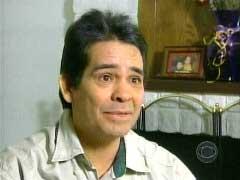 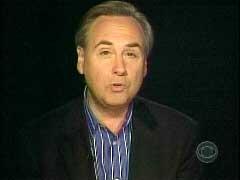 From an online Q&A with Rita Braver of CBS News.

Who is the most fascinating person you've covered...

Bill Clinton is probably the most fascinating person I've ever covered ... because he is both brilliant and flawed. I have never met anyone more charming ... or more exasperating.

If you could change one thing about the profession of journalism, what would it be?

I'd like to see everyone who claims to practice journalism be held to the same standards of accuracy and fairness that broadcast network news divisions and major newspaper are held to. 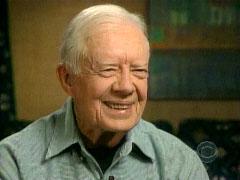 This past Sunday on Sunday Morning with Charles Osgood, viewers were treated to an interview of former President Jimmy Carter conducted by reporter Rita Braver. Most of the subject matter that was covered was fluff, what President Carter does to keep himself busy, trips he’s taken, elections he’s overseen and so forth.

Don't miss my latest at the Free Market Project:  Contrary to the media’s pessimistic forecasts for the Christmas shopping season reported by the Free Market Project in late October, strong retail sales this Thanksgiving weekend got the annual end-of-the-year buying bonanza off to a bang. In fact, the economic data available prior to this weekend looked so strong that the National Retail Federation, the world’s largest retail trade association, actually raised its sales forecast for 2005 holiday shopping from a 5 percent year-over-year increase to 6 percent.

Regardless of this upgrade in expectations by retailers themselves, and the fabulous start to the shopping season, the media continued to rain on everybody’s parade.

MRC analyst Mike Rule reported the liberal commentary of actress/comedienne Nancy Giles appeared again on CBS's Sunday Morning with that old reliable liberal target, the Rev. Pat Robertson. (I doubt Ben Stein will appear on CBS for a rebuttal on this topic.) To Giles, there were only two approaches to teaching evolutionary theory: teaching Science, or "dumbing down young minds" with a little time exploring the intelligent-design theory: 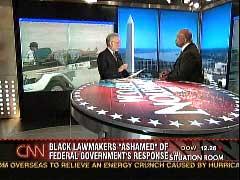 In the days and weeks following the disaster in New Orleans, many in the media suggested that the federal government’s “slow” response to Hurricane Katrina was caused by the race and economic condition of those impacted. President Bush had to regularly answer the questions of reporters concerning this, while media members opined at will.

Media Use Katrina to Lobby for Higher Taxes

Stephen Spruiell at NRO reports that among the new features on CBS's Public Eye blog are a defense of "Sunday Morning" commentator Nancy Giles.

CBS News Sunday Morning “contributor” Nancy Giles, in the only commentary aired on the show on Sunday, delivered a blistering diatribe in which she charged that racism was behind the slow response to the hurricane victims in New Orleans, rationalized looting, claimed the real war is the one on poverty that’s being lost thanks to tax cuts, and mocked President Bush for visiting Iraq but skipping the Superdome -- thus showing he doesn’t give “a damn” about black people.

Giles asserted that “if the majority of the hardest hit victims of Hurricane Katrina in New Orleans were white people, they would not have gone for days without food and water” and insisted that “the real war is not in Iraq, but right here in America. It's the War on Poverty, and it's a war that's been ignored and lost.” She complained that “we've repeatedly given tax cuts to the wealthiest and left our most vulnerable American citizens to basically fend for themselves." Giles scolded Bush for finding photo-ops with some “black folks to hug” while he skipped “the messy parts of New Orleans.” She castigated Bush for how he “has put himself at risk by visiting the troops in Iraq, but didn't venture anywhere near the Superdome or the convention center, where thousands of victims, mostly black and poor, needed to see that he gave a damn."

Full transcript of her September 4 commentary follows, as well as a look back at her 2003 commentary charging Rush Limbaugh with racism.