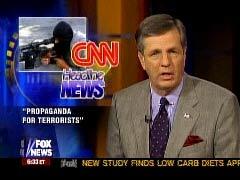 On Monday's Special Report with Brit Hume -- broadcast from FNC's (pretty dark) Manhattan headquarters instead of Washington, DC -- Fred Barnes, Morton Kondracke and Bill Kristol made some last-minute predictions on what will occur in Tuesday's election. All three agreed that Democrats, who need to capture 15 more seats to re-gain a majority in the House, will succeed. Barnes pegged the Democratic pick-up at 20 to 25 seats, Kondracke at 25 to 30 seats and Kristol at 35 to 40 seats.

In the Senate, where Democrats need a net gain of six seats to take control (counting expected independent victors Sanders of Vermont and Lieberman of Connecticut as organizing with Democrats), only Barnes was confident Republicans will hold the upper body -- but he didn't give a number. Kristol and Kondracke hedged their bets as both forecast a 50-50 split, which Vice President Cheney could break in favor of Republicans, or a 51 to 49 Democratic majority. 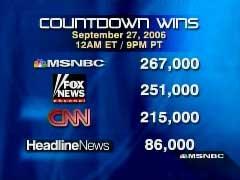 A night after slamming Fox News Chairman and CEO Roger Ailes as the “Worst Person in the World” for saying former President Clinton's reaction to Chris Wallace was “an assault on all journalists" (NewsBusters item), MSNBC's Keith Olbermann on Thursday mocked “the circular gentleman” for telling the FNC staff on the tenth anniversary of the network that in the future they need “to focus more on taking audience away from broadcast ne

During the "Fox News Sunday" interview between Chris Wallace and Bill Clinton, the former president suggested ulterior motives for bringing up his administration's role in failing to prevent 9-11: "You set this meeting up because you were going to get a lot of criticism from your viewers because Rupert Murdoch's supporting my work on climate change."

Clinton also charged that Chris Wallace had not asked the same questions of the Bush administration:

"You launched it — it set me off on a tear because you didn't formulate it in an honest way and because you people ask me questions you don't ask the other side."

But in yesterday's "Political Grapevine" segment of "Special Report with Brit Hume," Hume said that Chris Wallace had indeed asked the same questions of Donald Rumsfeld.

Nothing But Fear Itself: GMA's Interview Ignores Global Warming Skeptics 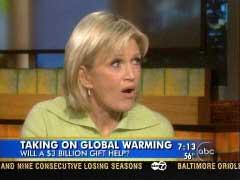 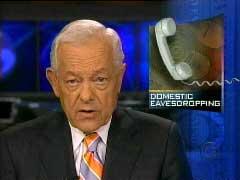 On Thursday, all three network evening newscasts covered the ruling by a federal judge against the Bush administration's controversial NSA spying program that involves warrantless monitoring of international phone calls when one participant is a terrorist suspect.

Cynthia McKinney: 'I Would Vote for Impeachment'

By MsUnderestimated | August 7, 2006 7:31 PM EDT
McKinney just can't keep her mout shut. After the horrific debacle that was her debate this past Saturday, today she was on the morning radio show, V-103. Both she and Hank Johnson were in the studio, and having only seen the clip below, I wonder if Hank Johnson ever got a word in edge-wise? V-103 is no friend to the President. Jim Angle had a brief piece about this on Special Report tonight. (MsUnderestimated has the video here.) 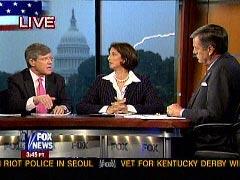 Was it Robert Novak who jolted aficionados of the vendetta-against-Joe-Wilson conspiracy theory, or was the message coming from . . . a Higher Authority? You be the judge, after having a look at the screen capture from this evening's Special Report with Brit Hume on FNC. Yes, that's a lightning bolt. No, it wasn't photo-shopped - it's the real thing. 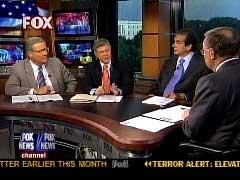 The panel, on Friday’s Special Report with Brit Hume on FNC, denounced the New York Times for their Friday article, quickly picked up by other newspapers and published over the objection of the Bush administration and 9/11 commissioners, about how the CIA and Treasury Department are tracking international banking transactions by terrorist operatives. 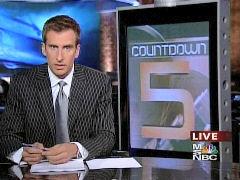 On MSNBC's Countdown show on Thursday, substitute host Brian Unger suggested President Bush views American troops as "expendable" as he picked up on an erroneous report by the Washington Post that the new Iraqi government would offer amnesty to insurgents who had killed American troops.

During the panel segment on Wednesday’s Special Report with Brit Hume on FNC, Fred Barnes and Morton Kondracke criticized and ridiculed the questions posed by the White House press corps during the morning’s presidential press conference in the Rose Garden. Kondracke pointed out how “there was hardly any question, critical question from the right,” such as about how Bush was following a misguided Clintonite path on Iran or how not enough troops are being allocated to securing Baghdad.

Barnes proposed: “These questions tell you what reporters are interested in and not what is really important or what the American people would like to hear about.” Barnes mockingly recited what upset him: “The President just went on a trip to Iraq to demonstrate that he's not pulling out the troops right away. If you couldn't realize that that's what that trip was partially about, you're an idiot. And yet the first question was about a troop pullout. The second question was about getting out of Guantanamo. I mean, it just went on and on. Two questions about Karl Rove. Karl Rove has just been vindicated, and these questions were, 'Mr. President, now really, now he may not be indicted but he really did bad stuff, right? Tell us about it.' Come on. This is, these are obsessions of reporters that don't match the feelings of the American people." Barnes also zeroed in on “preening by some reporter with a gotcha question. Ridiculous." (Transcript from Hume’s show, and of several of the questions posed in the Rose Garden, follow.)

By Greg Sheffield | May 17, 2006 11:09 AM EDT
On Tuesday's "Special Report with Brit Hume," the "all-star" panel of Mort Kondracke, Mara Liason, and Fred Barnes discussed how the new White House press secretary, Tony Snow, did on his first day. There was also a clip of Helen Thomas badgering the new press secretary on a phantom issue.

BRIT HUME: All right. When we come back with our panel, how did Tony Snow do in his first outing in front of the full press corps under the lights? More with the all-stars after a break.