Seattle's $275-per-employee "Head Tax" (EHT), which was to be levied against every business with over $20 million in revenue, was repealed on Tuesday by a 7-2 City Council vote. City leaders' abrupt repeal occurred when it became obvious that a referendum effort would gather far more than enough signatures to qualify for the November ballot. In a 1 p.m. ET Associated Press dispatch published before the vote, Amazon-obsessed reporter Phuong Le was extraordinarily bitter and hostile.

The world finally got an answer today to this question: "How many serious allegations of sexual abuse of minors have to be brought forth against Democrat Mayor Ed Murray of Seattle before he'll do the right thing and resign?" Early Tuesday, Murray's fifth accuser came forward. Hours later, he resigned, effective Wednesday afternoon. Thus ends one of the most disgraceful sagas in the history of local media anywhere.

In May, as noted at NewsBusters, Seattle Mayor Ed Murray ended his run for reelection in the wake of "mounting allegations that he sexually abused underage boys in the 1980s." On Sunday, the Seattle Times reported that records previously thought destroyed revealed that "An Oregon child-welfare investigator concluded" that" Murray "sexually abused his foster son in the early 1980s." The Times, as well as related wire reports from the Associated Press and Reuters, only told readers that Murray is a Democrat in very late paragraphs.

Seattle Mayor Ed Murray announced on Tuesday that he will not run for reelection as the city's mayor because of mounting allegations that he sexually abused underage boys in the 1980s. Press coverage has either ignored Murray's Democratic Party affiliation or buried it in related stories' late paragraphs.

This outcome also exposes a double standard in the Evergreen State press, and should (but probably won't) lead management at these outlets, particularly at the Seattle Times, to question why they chose not to report multiple allegations against Murray which first surfaced almost a decade ago.

Perhaps in response to media critics, the establishment press has generally been more likely to prominently apply a party tag to Democrats charged with crimes or affected by scandals in recent years — not nearly as often or as prominently as for Republicans and conservatives, but an improvement over the almost laughable situation a decade ago. But in its treatment of Ed Murray, beginning Thursday afternoon, when the Seattle Times first reported on a lawsuit's allegation that the Seattle Mayor had paid for sex with an underage boy in the 1980s, the press has returned to its old ways. Why is that?

It seems Starbucks is regretting the health care Frankenstein it helped create. The company was a key corporate backer of Obamacare in its legislative stages, but its top executive has raised concerns about the law's economic damage.

Today liberal Senate Democrats failed to garner the 60-vote threshold to end debate on and move to a final passage vote for the DREAM Act.

In covering the story, the news wire credited Republican opposition for "doom[ing]" the legislation, but the math doesn't work out when you look at the breakdown of the votes on the motion to end debate -- also known as invoking cloture. [h/t reader Kevin Davis]

The Seattle Times needs a refresher course on impartial journalism. Staff reporter Lornet Turnbull didn't even try to cover her liberal tracks as she embraced the LGBT agenda in a March 31 article: "Census Will Count Gay Couples Who Check 'Husband or Wife.'"

Turnbull's article about the LGBT community's anger toward the Census Bureau tilted in favor of the homosexual agenda with sources stacked 3-to-1.

Josh Friedes, the executive director of a Seattle LGBT advocacy group, told Turnbull that "even in the absence of federal recognition of our relationships, we have an opportunity to say on an official form that, 'Yes, we are married,' 'Yes, our relationships are every bit as equal to everyone else's.'"

The Ignorant Seattle Times and the Rep. Driehaus Office Rock-Throw (UPDATE: The Times Responds and Corrects)

People in Cincinnati who follow politics reasonably closely will be scratching their heads wondering what's gotten into the people assembling news stories at the Seattle Times once they learn of what the Times reported in an item that originally went up Wednesday evening and was modified Thursday morning:

A rock was thrown through the window of (1st District Congressman) Driehaus' Cincinnati office Sunday, and a death threat was phoned in to his Washington office a day later, Mulvey said.

Driehaus, who claims to be pro-life but in reality stopped being so when he supported Barack Obama for President in 2008, is one of the members of the Bart Stupak contingent that abandoned their alleged pro-life beliefs to vote for statist health care in the House Sunday night.

Well, perhaps the death threat was real, and of course if it is it demands a thorough investigation.

But there's a "little" problem with the news about that rock throw: 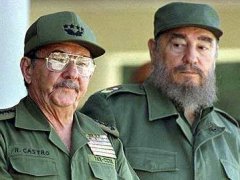 It seems that the Seattle Times couldn't be bothered to do even a bit of simple research. If they had, they might have spared themselves from publishing an editorial that got  the facts about American trade with Cuba completely wrong:

SEN. Maria Cantwell calls our attention to a law, signed by President Obama, allowing Cuba to buy U.S. farm produce and pay after the goods are shipped. The law reverses a Treasury ruling during the Bush years that Cuba had to pay in advance — a ruling that stopped the trade altogether.

As Humberto Fontova of the Babalu Blog colorfully pointed out:

...And YET the editorial staff of an eminently prestigious big-city newspaper was incapable of the ONE Google search that now makes COMPLETE JACKASSES of them ALL!!!

What's become of America when you can't even go to a horror movie without having to endure Obama propaganda?

Unfortunately, such exists in the recent installment of the hit slasher series "Saw VI."

Readers are encouraged to stow fluids, flammables, and sharp objects before proceeding further, for the following review by Los Angeles Times movie critic Robert Abele is sure to elicit bouts of uncontrollable laughter (h/t Big Hollywood): 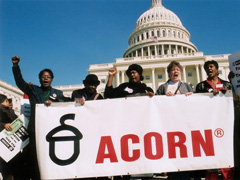 In a column today, Salon’s Joe Conason drastically downplays the history of illegality that characterizes the Association of Community Organizations for Reform Now. In his revisionist history of the organization, Conason tries to show that ACORN may commit voter registration fraud, intimidate its employees to prevent them from unionizing, and willingly assist in the trafficking of underage sex slaves, but by and large it is a force for good.

For many years the combined forces of the far right and the Republican Party have sought to ruin ACORN, the largest organization of poor and working families in America.


Ah yes, ACORN is supposedly battling for the rights of the working class. But in 1995, the organization sued the State of California for an exemption to the high minimum wage laws in that state on the grounds that higher wages would mean they would have to employ fewer people. Incidentally, this is the exact same argument that every opponent of minimum wage laws employs, and ACORN has always battled for a higher minimum wage.