With one week to the midterm elections, the Conference Board released its latest survey of consumers showing their confidence soared to an 18-year high and also found high expectations for early 2019. This might well surprise many news consumers given how little effort the media have spent reporting on the good economy.

VIDEO Hilarious: NYT CEO Tells CNBC That Paper’s News Coverage Does Not Have a Liberal Bias

On Thursday, New York Times CEO Mark Thompson stopped by CNBC’s Power Lunch to discuss the paper’s subscription numbers since the election and hilariously argued that the newspaper doesn’t display a liberal bias because “we aim to be objective and to tell people straightforwardly what's happening.”

Hillary Clinton’s proposal to spend $350 billion on “affordable” tuition may have been outrageous, but at least it provoked some poignant comments on the pitfalls of big government.

On Monday, President Obama released his 2016 budget, which calls for increased spending and raising taxes, and on MSNBC’s The Cycle, so-called conservative co-host Abby Huntsman did her best to scold the GOP for opposing the tax-and-spend Obama budget. Speaking to Lauren Fox of National Journal, Huntsman proclaimed that Republicans’ “big thing is we’ve got to cut spending, this is not something we’re going to approve and that’s often why they are considered the jerks here, because they aren’t talking about entitlements, they are talking about cuts.”

Appearing on CNBC's Power Lunch at 1 p.m. ET Friday, the business network's chief Washington correspondent John Harwood touted President Obama's proposal to tax 529 college savings accounts: "If you want to change the distribution of income in this country, you've got to take from some to give to the other, and that's precisely what the President wants to do. Middle class families...have stagnated for a long time...while people at the top have done much better. So the administration is trying an across-the-board attempt to change that....redistribution Obama-style."

It seems like a phony issue for the a struggling Obama administration to be promoting – the allegations that the U.S. Chamber of  Commerce may or may not be using foreign contributions to fuel political ads against Democrats. However, President Barack Obama would be best advised to make sure his party wasn’t doing something similar before using the bully pulpit to push this meme.

On CNBC’s Oct. 11 broadcast of “Power Lunch,” CNBC Washington correspondent Eamon Javers laid out the latest ramped up attacks on the U.S. Chamber of Commerce from the president.

What is it with Hollywood personalities going to and being swept off their feet by the thuggish dictator Hugo Chávez. They come back with these stories claiming he is just misconstrued by the media and that he’s really a great guy.

On Oct. 7, at an appearance at the Cato Institute in Washington, D.C. promoting her book “You Know I'm Right: More Prosperity, Less Government,” the proudly libertarian co-host of CNBC's “Power Lunch” Michelle Caruso-Cabrera explained how this could happen. She told an audience that Chávez has a very charismatic, yet seductive personality.

“I was telling – my two most interesting interviews I think I’ve ever done are Milton Friedman, very influential on me, and also Hugo Chávez, because when I interviewed him I was struck by how much I like him,” she explained. “He’s very funny. He is so charming. He is smooth. He could be a stand-up comedian. He is a seductor, as I suspect most dictators are – that’s how they get to where they are.”

The Twitter "Fail Whale": An irritating part of anyone's day that regularly uses social networking in their day-to-day activities. But could this endanger the viability of Twitter as long-term business?

"Twitter's down all the time," Greenburg said. "I love using Twitter. I will say it here and now - if Twitter were a business, it would be broke. Wait! Twitter is a business, but it's a private business. Maybe it's the type of business that should go public in this environment because those are the kind of companies that go public. 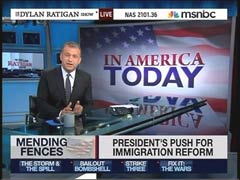 'Power Lunch' Guest Says No to Greek Debt, Warns All Governments Will Default

By Julia A. Seymour | February 10, 2010 5:41 PM EST
Just one day after Treasury Secretary Timothy Geithner said the U.S. wouldn't lose its "top-notch" credit rating, one CNBC guest said that ‘"all governments" will default - it's only a matter of time.

When asked by "Power Lunch" co-anchor Sue Herera if he would buy Greek debt, Marc Faber said: "No, I'm not interested in government or sovereign debts because I think that all governments will eventually default, including the U.S."

"Mhmm. All governments," Faber, editor of the Gloom, Boom & Doom Report, explained. "Some like Singapore that have basically no government debt and have huge reserves ... in general the problem is the emerging economies today are financially much sounder in terms of debt to GDP than the developed world, including the U.S., Western Europe, the U.K. and so forth.

The government's traditionally enforced safety standards on automobiles sold in the United States. But the government didn't always own a car company. So you'd expect the media to take a hard look when the government's roles as regulator and competitor converge.

But unless you saw the Jan. 28 broadcast of CNBC's "Power Lunch," you might not realize that this is exactly what has happened. In an interview with CNBC "Power Lunch" co-host Michelle Caruso-Cabrera, Sen. Jeff Sessions, R-Ala., was asked about the Toyota recall, which involves 2.3 million vehicles since a Toyota manufacturing facility had recently located in Alabama.

"We've got a fabulous Toyota engine plant in Alabama," Sessions replied. "They've been doing very well. It seems that they've recognized they're going to fix this problem and it's going to take some effort."

Want to make a big splash to bolster your chances in a political campaign? A tried and true strategy for some attorneys general has been to champion a populist position by exploiting the legal system for publicity. Just look at the lead up to the launch of former New York AG Eliot Spitzer gubernatorial campaign with his attacks on Wall Street.

However, CNBC's Michele Caruso-Cabrera wasn't afraid to ask Brown if that was indeed the case in an Oct. 20 interview on CNBC's "Power Lunch."