In a talk with the editor of the liberal Texas Monthly that airs on Texas PBS stations, former CBS anchor Walter Cronkite uncorked some more liberal opinions.

As noted by Tim Graham Tuesday in a NewsBusters item about 60 Minutes correspondent Mike Wallace announcing that he will retire at the end of this season, “perhaps the most-recounted Wallace anecdote didn't appear on CBS, but on PBS.” Indeed, on an edition of the PBS panel series Ethics in America, devoted to war coverage, which was taped at Harvard in late 1987, Mike Wallace proclaimed that if he were traveling with enemy soldiers he would not warn U.S. soldiers of an impending ambush. “Don't you have a higher duty as an American citizen to do all you can to save the lives of soldiers rather than this journalistic ethic of reporting fact?", moderator Charles Ogletree Jr. suggested. Without hesitating, Wallace responded: "No, you don't have higher duty...you're a reporter." When Brent Scrowcroft, the then-future National Security Adviser, argued that "you're Americans first, and you're journalists second," Wallace was mystified by the concept, wondering "what in the world is wrong with photographing this attack by [the imaginary] North Kosanese on American soldiers?"

George Connell, a Marine Corps Colonel, reacted with disdain: "I feel utter contempt. Two days later they're both walking off my hilltop, they're two hundred yards away and they get ambushed. And they're lying there wounded. And they're going to expect I'm going to send Marines up there to get them. They're just journalists, they're not Americans." The discussion concluded as Connell fretted: "But I'll do it. And that's what makes me so contemptuous of them. And Marines will die, going to get a couple of journalists." (More quotes follow.)

Bill Moyers Fires Back at NewsBusters

Bill Moyers, former CBS reporter and former host of PBS's "Now with Bill Moyers," has fired back at a NewsBusters article that criticized him for only going after Republicans.

Now that he no longer works at PBS, Moyers has free time for such things as blogging, which he does for the Huffington Post. 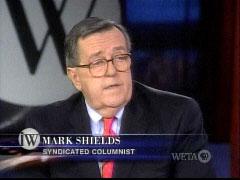 How do members of the media really feel about Dick Cheney? Mark Shields, a syndicated columnist appeared on the roundtable discussion show Inside Washington, which airs on Friday nights on local PBS powerhouse WETA. He blasted Cheney, linking the accident to his Vietnam deferments, saying:

More Colby King: Is Bush the "Masta In The House"? 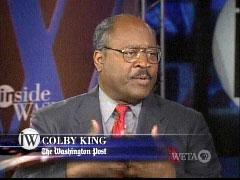 Is George Bush a slave owner? Viewers of this past Friday’s Inside Washington on PBS, may think so. Washington Post Columnist Colby King inferred as much saying:

The Public Broadcasting "Service" selected Paula Kerger from the mega-station WNET in New York to be their new president yesterday. Liberal AP media reporter Frazier Moore, a fan of "truth-telling" Bill Moyers, excluded any conservative reaction, but listed the fight over liberal bias to be among Kerger's challenges.

Before the new work year really kicks in, one little thing that caught my eye in between holidays. The PBS show "Charlie Rose" had a panel of film critics on to discuss the year in movies on December 21: Richard Corliss of Time, A.O. Scott of the New York Times, David Denby of The New Yorker, and Lisa Schwarzbaum of Entertainment Weekly.

To wrap up our list of the Best of NQ's worst quotes of the year, a look now at the more recent winners in the Dubya era. For reasons which shall become obvious (length), we'll go backwards in this post. 2005's Quote of the Year (Mary Mapes on her strange philosophy of journalism) is here.

To welcome in 2006, I thought it might be fun (as one radio host suggested) to take a look back at all of our Quotes of the Year from the Best of Notable Quotables of the Year, all the worst, dumbest, and most bizarre quotes of each particular year. First, a look at the four years of President Bush Number One.

Last Friday, the National Security Archive, a research institute and library located at George Washington University that collects and publishes declassified documents obtained through the Freedom of Information Act, celebrated its 20th anniversary. Former PBS host Bill Moyers gave a speech to the attendees that evening in which, as has been typical for him, he didn’t have very nice things to say about the Bush administration. The full text is too long to do justice to the breadth of Moyers’ antagonism towards this White House, but some of the lowlights are: