Monday night's hour of conversation between PBS anchor Jim Lehrer and long-time Washington Post Executive Editor Ben Bradlee, titled "Free Speech,"  was a cozy liberal-media insider chat, but awfully dull -- dull enough to make you feel for journalism students that are going to be forced to watch it in class. Cozy snippet example number one is Lehrer asking Bradlee near the end: "One of the other cliches they say about folks like you and me, people who practice journalism is that, we pessimistic; that we're cynical. 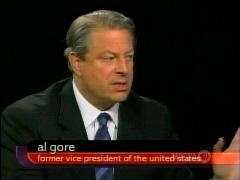 Back from a break for heart surgery, PBS talk-show host Charlie Rose devoted his entire hour-long show Monday night to Al Gore, promoting his doom-documentary "An Inconvenient Truth." Rose pressed Gore comfortably from the left: if the president has an "intellectually dishonest" position ignoring the facts, and why no one is having an "enlightened

A new documentary about Vice President Dick Cheney is set to air this evening on PBS. It’s called “The Dark Side,” and based upon a review published in today’s New York Daily News, it doesn’t appear to be very flattering.

First, the title comes “from a quote by Vice President Cheney in the wake of 9/11. Cheney said that the CIA, the Pentagon and other intelligence-gathering U.S. forces would have to ‘work from the dark side’ to glean information and combat and defeat terrorism.”

However, let’s be serious: what viewer isn’t going to assume that the title is a more direct reference to the movie “Star Wars,” and that Cheney is being depicted as Darth Vader? Forgive me, but as George Carlin said many years ago, you don’t have to be Fellini to figure that out.

The documentary then picks up some rather familiar liberal themes that we’ve all been hearing ad nauseum for years:

Charlie Rose Back on PBS, Liberal Bias Unfolded In His Absence 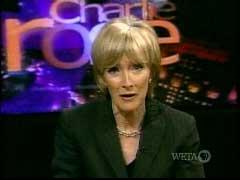 PBS talk-show host Charlie Rose returned to his set on Monday night after some weeks off for heart surgery. While he was out, PBS used a rotating set of liberal-media stars as hosts, including Barbara Walters, Brian Williams, and CNBC's Maria Bartiromo. Just last week, MRC intern Chadd Clark found some typical liberal thoughts coming from guest hosts.

Not that there's been any doubt as to the politics of NPR and PBS - home to world-class Republican haters such as Bill Moyers. Still, it's instructive to see just who has launched a massive organizing effort to ensure continued taxpayer funding of the two organizations. Turns out . . . it's none other than the far-left MoveOn.org.

Rick Klein at the Boston Globe reported Thursday that Republicans in the House are proposing a cut for the Corporation for Public Broadcasting (CPB) again, which completely failed last spring:

NPR’s Nina Totenberg claimed that the United States was becoming East Germany on the program "Inside Washington" which airs on some PBS affiliates, and in the Washington D.C. market on News Channel 8 as well as the local ABC affiliate.

Thursday morning's Today contained a few pop-culture nuggets that revealed liberal media attitudes. As Kathryn Lopez noted on The Corner, in the 7:30 half hour, Katie Couric turned the "American Idol" chat into a peek at her feminist parenting habits (and once again, she plugged her love for Helen Reddy):

Perhaps it should strike no one as big news that PBS and Democrats often go together like peanut butter and jelly. The Honolulu Star Bulletin reported today that the president and CEO of PBS-Hawaii, Mike McCartney, is running for chairman of the state's Democratic Party:

McCartney says he has taken a leave of absence from the statewide public television operation and will step down next month.

There are a few other more personal notes in the Barbara Walters interview with Jane Fonda on PBS. Ted Turner's first words on his first date with Fonda are a little bizarre: "We got in the car. His first words to me was, ‘some of my best friends are communists. I’m thinking, ‘did he say that because he thinks I’m a communist, and it won’t get in the way’?" He named Gorbachev and Castro as his close friends. 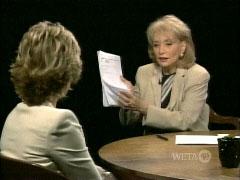 At the late-night PBS talk show "Charlie Rose," the revolving door of hosts keeps turning. On Monday night, ABC's Barbara Walters interviewed Jane Fonda about the paperback edition of her memoir, and just past the midway point of the interview, Walters asked indignantly about conservative opposition to her. "It amazes me that I still get letters about you...what has it been since Vietnam? Forty years?...The anger. 'Traitor to her country. 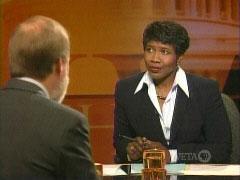 The bad news keeps coming for the Bush administration, at least that’s what we were told on PBS’s "Washington Week." For those not familiar with the program, it is moderated by Gwen Ifill, and is a roundtable discussion of reporters, each reporter taking a turn focusing on a political topic while the others ask them questions.