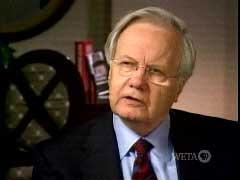 In an interview with Harvey Blume for the Boston Globe, PBS omnipresence Bill Moyers denied he's become radical unless it's "Thomas Paine radical," and "In many other ways, I'm a conservative," since he's been married a long time and goes to church.

PBS omnipresence Bill Moyers asked "Is God Green?" in his liberal campaign trilogy "Moyers in America" last week. Over at Businessandmedia.org, Rachel Waters noted that Moyers insisted that conservatives were only "mildly joking" with the hang-em-high bumper sticker "Support Environmentalists With a Rope." Catholic blogger Jimmy Akin tipped me off to another angle. One Christian expert Moyers used who was not bowing before Greenpeace, Calvin Beisner of the Interfaith Stewardship Alliance, reported Moyers was very frank about his intention to boost Democrats into majority status:

The bias of Moyers’s program is not surprising. He forthrightly told me before our interviews that he, as a liberal Democrat, hoped to use this program to divide the evangelical vote and return control of Congress to the Democrats in November's elections. The timing of the program’s release, therefore, is not surprising.

Is PBS too conservative? Is it "too balanced"? The radical leftists at Fairness and Accuracy in Reporting have produced another stilted study of the NewsHour with Jim Lehrer accusing the show of presenting "virtually the same voices as corporate media, voices that overwhelmingly represent those in power rather than the public PBS is obliged to serve."

In a discussion on Inside Washington about the situation in Iraq and Bob Woodward's book, Colby King, Deputy Editor of the Washington Post's editorial page and a weekly columnist, made clear his disgust with President Bush -- to the point of rejecting Bush as Commander-in-Chief and arguing Bush is more deserving of impeachment than was President Clinton. “If we had a draft today and my sons had to go in the service under this Commander-in-Chief and his military advisors, I'd be hard-pressed,” King revealed, “to say serve under them." Citing how too many are being killed in Iraq “because of dumb decisions made by these people in the Pentagon,” an exasperated King recalled how “they impeached the President...for having some relationship with an intern. What about the people who got us into this mess?"

A bit later in the program aired Friday night on Washington, DC's PBS station, NPR reporter Nina Totenberg predicted: “When the history books are written, we will not be proud of this country or this President.” 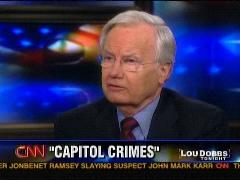 It's always interesting in a fall election season to see what your taxpayer dollars are buying at the Public Broadcasting Service. Some might call it an "in-kind contribution" to your friendly local Democratic candidate. Liberals would never favor a McCain-Feingold-style bill that made PBS political programs go off the air in the last 60 days of an election cycle. A colleague sent this notice from TV Guide:

Mo Dowd: Dick Cheney Is Out to Destroy Our Checks and Balances 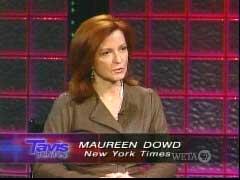 New York Times columnist (and former Times reporter) Maureen Dowd appeared on the "Tavis Smiley" show on PBS on Wednesday night with her typical take on the news: Bush and Cheney are suffering from testosterone poisoning, and she urged the media to keep pushing because "checks and balances is what Dick Cheney is trying to destroy." But Hilla

NPR's Nina Totenberg: We Made Hugo Chavez Into a Global Spectacle 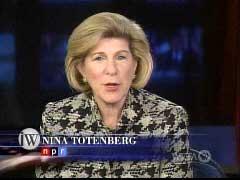 There still is a Blame America First lobby. 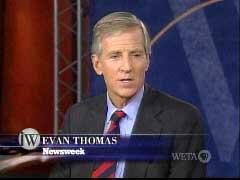 On the chat show "Inside Washington" on PBS station WETA last night, the spin was in: Plamegate was a massive zero. No one was more enthusiastic than Newsweek's Evan Thomas. I'm sure the reporting of his colleague Michael Isikoff has him completely persuaded. But here's what didn't come up: how much ink did Newsweek spill hyping this "zero" story up? (Hint: here's just one example.) 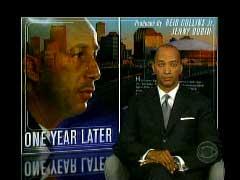 This past Sunday on "60 Minutes," CBS correspondent Byron Pitts interviewed New Orleans Mayor, Ray Nagin, about New Orleans’ recovery since hurricane Katrina. Pitts’ hit Nagin with statements full of hyperbole, claiming there are "few visible signs of recovery" in New Orleans, and that there is "tons of debris still scattered about," yet, Pitts offered little in the way of facts and figures to back up his claims. 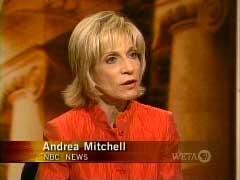