MSNBC: Hezbollah Helped Qana, But 'No Evidence' It Was Launching Rockets

NBC reporter Richard Engel sure has some severely selective sources. On the one hand, he's overflowing with information reinforcing the image of Hezbollah as a kindly humanitarian organization that was providing "supplies and relief" to the residents of Qana. On the other hand, he has "no evidence" that Hezbollah was using Qana residents as human shields for purposes of launching rockets.

Engel reported live from Tyre in southern Lebanon during this afternoon's 'The Most' on MSNBC, with host Alison Stewart. Speaking of events in

"I got no indication [the people of Qana] were being held against their will. Just the opposite, it seemed Hezbollah was helping these people, providing them with food and water. These were some of the [poorest] people in the town, those with money had already left. They were staying in this section of town because there was food and water. Hezbollah were giving them supplies and relief."

Olbermann Says Gesture Was Appropriate Due To O'Reilly's Defense of Nazis

Keith Olbermann, who did the Nazi salute with an O'Reilly mask covering his face, has responded to FOX News' Roger Ailes remark that the MSNBC host's action was over the line.

Unsurprisingly, Olbermann's response was made available to TVNewser:

Wasn't Tucker Carlson supposed to be MSNBC's conservative counterweight to Olbermann, Matthews, & Co?  I might have to rethink that one, judging by the opening roll of his 'Tucker' show this afternoon, which clearly cast Israel as the heavy in the current conflict. Here's how it went:

MSNBC: Find W's Merkel Back Rub Under 'Grope' and 'Creepy'

Alison Stewart is the hip-'n-edgy host of MSNBC's 'The Most,' which as its promo page explains: 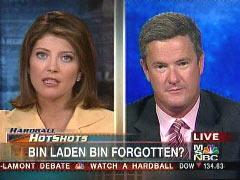 Does Norah read NewsBusters? Could it be pure coincidence that Hardball's 'What'd You Say?' audio highlights of the week just happened to select the two items we had highlighted here and here? Who knows?

In May of 2004, Abu Musab Al Zarqawi participated in the beheading of Nicholas Berg, a businessman working in Iraq. His father, Michael, emerged in the aftermath of that crime as an outspoken liberal activist and is now running for Congress in Delaware on the Green Party ticket. So who better to bring on for a discussion about Zarqawi’s death? Michael Berg appeared on all three cable channels this morning to spew hatred towards the United States Government and George W. Bush. Interestingly, only one network, MSNBC, found the time to mention that Mr. Berg is now a political candidate. Rather then cover the successful elimination of a significant terrorist threat, CNN, FNC, and MSNBC all gave time to someone who would make statements such as this one on CNN’s American Morning at 7:50AM EDT:

Michael Berg: "Well, you know, I'm not saying Saddam Hussein was a good man, but he's no worse than George Bush. Saddam Hussein didn't commit the rapes, neither did George Bush, but both men are responsible under their reigns of, of terror....I don't get it. Why is it better to have George Bush be the king of Iraq rather than Saddam Hussein?"

By Tom Blumer | January 21, 2006 3:57 PM EST
Sometimes a story just doesn't seem to be "all there." Cinnamon Stillwell suspected as much in a NewsBusters item on January 10:

Call me overly suspicious, but the story of 16-year-old Farris Hassan traveling to Iraq on a whim strikes me as unbelievable.

Hassan's interview with Rita Cosby of MSNBC, a Florida newspaper columnist's skepticism, and a January 18 posting by the Northeast Intelligence Network (NIN), which describes itself as &qu

Call me overly suspicious, but the story of 16-year-old Farris Hassan traveling to Iraq on a whim strikes me as unbelievable. The Florida teen of Iraqi descent was all over the news in December when he apparently took off without telling his family and headed to Iraq to see what all the fuss was about. Hassan was able to finance his plane ticket to Kuwait with money he earned trading stocks on the Internet.

How does one analyze the economy's performance without considering tax policy?

In a column posted on the afternoon of December 8 at MSNBC's web site, James C. Cooper and Kathleen Madigan of Business Week Online devote over 1,100 words to analyzing and explaining the current strong economy, and fail to cite the 2003 Bush tax cuts as a possible contributing factor. In fact, the words "tax," "Bush," and even "government," do not appear at all!

Russert: First Indictment of a White House Official in 130 Years

By Mike Bates | October 28, 2005 6:50 PM EDT
After weeks of joyous anticipation by many in the media, a Bush Administration official, I. Lewis “Scooter” Libby, was today indicted by a federal grand jury. NBC's Washington bureau chief Tim Russert wanted to emphasize the event's importance, telling his MSNBC audience: "This is significant, it's the first time in 130 years a White House official has been indicted."

Not according to MSNBC's own Web site. It's "Fact File: White House Staff Indictments" provides a "brief

MSNBC's Blogger on Kanye West's Anti-Bush Slam: "That Was Great."

You'd think Kanye West's ill-informed remark ("George Bush doesn't care about black people": Newsbusters link) would be enough to illustrate how misguided it is to politicize a serious fundraiser. But MSNBC's blogger for the NBC/Red Cross event, Mike Miller, could not restrain himself as well. Is it that hard for some people to set aside political differences for just one hour in order to raise some money for some people who are really hurting? From Mike Miller's blog at MSNBC.com, in which he gave a chronological, running commentary of the event (emphasis mine):

"Great"? What was great about it? West's view is flat-out wrong. As President, Bush has given tremendous support to Africans and African-Americans.

MSNBC and the Big Picture

In an effort to make the upcoming Senate vote on tort reform for firearms manufacturers appear as nothing more than a squabble between political parties, MSNBC ran an AP story on July 26 leading with: