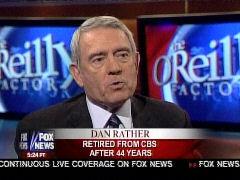 Appearing on FNC's The O'Reilly Factor Wednesday, former CBS News anchor Dan Rather conceded there's a "problem" with America's media in its treatment of Hezbollah and Israel with "moral equivalence," even including himself as part of the problem.

After her stunning knockout of Fox News’s resident liberal Juan Williams last Friday night, radio talk show host Laura Ingraham was looking to defend her title this Friday against Medea Benjamin. For those unfamiliar, Benjamin is the co-founder of the anti-war group Code Pink who heckled visiting Iraqi Prime Minister Mouri al-Maliki during his address to Congress Wednesday (hat tip and video courtesy of Ms. Underestimated and Expose the Left).

Ingraham (once again guest-hosting the "O'Reilly Factor") was clearly ready for this one, as she stormed into the ring in the first round looking for a quick knockout. Such an opportunity presented itself when Benjamin actually said that the reason she was heckling the Prime Minister was because he refused to meet with her organization while in America. Ingraham pounced with a fury of rights and lefts:

“Are you kidding me?"

“You actually thought you were going to meet with the prime minister of Iraq?”

“Why should he meet with Code Pink?”

That was just the beginning, for when Benjamin jabbed with a statement that “we represent now, the majority voice in the United States,” Ingraham moved in like an angered Max Baer:

For Laura Ingraham fans, it has been quite interesting to see her so much on Fox News lately, and watch the growth of one of America’s leading female conservatives. Conceivably, her recent success and notoriety have lead ABC to create a new television series casting “Ally McBeal” star Calista Flockhart as a conservative radio talk show host (as reported by NewsBuster Matthew Sheffield Tuesday).

With that in mind, Ingraham was on “The O’Reilly Factor” Tuesday, and she and Bill had some fun with this issue (hat tip to Ian at Expose the Left with video to follow). O’Reilly began, “Now, to change direction here, Calista Flockhart is teeing you off.”

Bill O'Reilly's down to his last strike. As noted here, on his radio and TV shows yesterday, Bill propounded the theory that the big-city newspapers have tread lightly in the current Middle East conflict for fear of alienating their liberal Jewish readers. As Bill put it, liberal Jews "are all the papers have left" when it comes to significant market niches.

So Much for O'Reilly's Theory: NY Times Calls for Immediate Cease-Fire

Back to the drawing board for Bill O'Reilly. As noted here, on his radio and TV shows yesterday, BOR propounded the theory that the big-city newspapers have tread lightly in the current Middle East conflict for fear of alienating their liberal Jewish readers. As Bill put it, liberal Jews "are all the papers have left" when it comes to significant market niches.

O'Reilly: Liberal Jews Are All Big-City Newspapers Have Left

Bill O'Reilly got his show off to a surprising start this afternoon, with a novel theory as to why the big-city newspapers have tread lightly in criticizing Israel for its role in the current conflict. During his opening monologue O'Reilly theorized that the papers are fearful of turning off liberal Jewish readers.

In our ongoing “Friday Night Fights” segment, an amazing barnburner occurred July 21 that will remind folks of Jane Curtin and Dan Aykroyd's old "Point/Counterpoint" skit on “Saturday Night Live” with the only thing missing being the famous line “Jane you ignorant slut.”

On the left was Fox News’s Juan Williams. On the right was conservative radio host Laura Ingraham filling in for Bill O’Reilly on “The O’Reilly Factor” (very enthusiastic hat tip to Ian at Expose the Left and Ms. Underestimated with absolutely must-see video to follow!).

From the beginning, this fight perfectly exemplified the divergence in opinion concerning the most recent flare up in the Middle East. Juan enunciated the liberal view that Israel is largely to blame for the rise in hostilities, and that America needs to put pressure on it to force an expedient ceasefire even if it goes counter to Israel’s ongoing security. Here’s a perfect example of Juan’s solution to the current problem:

Heart-rending images of small children being lifted across a fence. Outraged American/Lebanese evacuees alleging indiscriminate Israeli bombing ["they are bombing streets, gas stations, food stores, ranches."] A crying Lebanese man with blood on his shirt after his brother was killed by an Israeli bomb. And the only two reporters on the scene reporting from . . . Beirut. That was the way the 'Today' largely saw fit to cover the Middle East conflict this morning.

While none of the words or images are necessarily inaccurate [and we were treated to one evacuee heartily thanking Pres. Bush], they utterly fail

to tell the whole story. Yes, Israel is militarily superior to its immediate neighbors. So it is easy to portray it as the bully in this fight. But let's look at the larger picture - Israel, a small strip of land, with relatively few people or natural resources, surrounded by hundreds of millions of largely Muslim Arabs in more than a dozen states. Have a look at the map. Israel is a barely discernible dot in the Muslim sea. And just as it is geographically dwarfed so too is it overwhelmed when it comes to natural resources - oil

On Tuesday night’s “O’Reilly Factor,” host Bill O’Reilly and guest Laura Ingraham had a marvelous time tearing apart The New York Times (video link to follow). During the discussion, Ingraham pointed out something that many Americans now feel about the Old Grey Lady:

Well, I think that they truly believe that America is the single biggest danger to the modern world.

I don't think, Bill, that they believe that they have a dog in this terrorism fight. I think they think it's a fight between two groups of fundamentalist, the fundamentalists who are the Islamists. They don't much care for them.

But then the fundamentalists in the Bush administration, who have this messianic view of the world that they can make the world in their own image. And I think they're more petrified of the Bush fundamentalism, as they refer to it, than they are the Islamists.

Yikes. That about says it. O’Reilly then asked a pivotal question:

In the past two years, as oil and gasoline prices have moved to record highs threatening to strangle the American economy, the media have blamed it all on the current Administration in the White House. Or on Hurricane Katrina. Or Iraq. Or Iran. Or a strike in Nigeria. However, on Thursday, Fox News’s Bill O’Reilly got Sen. John Kerry (D-Massachusetts) to admit that the nation’s energy problems are caused by government’s inaction for decades, and that both parties are to blame (extremely grateful hat tip to Ian at Expose the Left with a video link to follow).

Certainly, this was an inconvenient truth for a former presidential candidate who blamed all the world’s problems on President Bush during the 2004 campaign to admit on national television. But, he didn’t give this up easily. In fact, at first, he did blame it on guess who. Fortunately, O'Reilly didn't let him get away with it:

Bill O’Reilly interviewed the outspoken Geraldo Rivera on “The O’Reilly Factor” Thursday evening concerning the current goings on in Iraq, and how the media are covering it. During their discussion, Geraldo stated his surprising support for President Bush, while offering a rather strong critique of Sen. John Kerry (D-Massachusetts) as well as for all those who want to establish a time certain for American troop withdrawal (video link to follow):

He continued on this train of thought later in the interview:

“But I'm telling the American people right now that Bush is right. The commander in chief is right. Woe on to us if we think that we can forget about what's happened. That, I think, is lamentable.”

Geraldo also lashed out at the junior senator from Massachusetts:

Lauer to O'Reilly: Gitmo Release Could Result in an 'International Willie Horton' 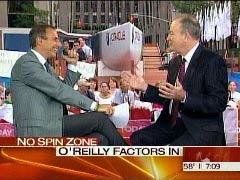 Has Katie Couric's departure had a salubrious effect on Matt Lauer? Freed his inner moderate? The jury's still out. And to be sure, in his interview of Bill O'Reilly this morning Lauer managed to take shots at Ann Coulter and the Iraq security situation. Still, when an MSM host suggests that releasing prisoners from Guantanamo could result, of all things, in an 'international Willie Horton,' it does make you sit up and take notice.