The media's victory lap for President Obama's flipflop on same-sex marriage is starting to get downright disgraceful.

The cover of Monday's issue of New Yorker magazine features an animated picture of the White House with rainbow columns:

NBC's Lauer Chats With Obama About GOP Candidates 'Pummeling Each Other': 'Does This Help You?'

Once again touting the latest cover of New Yorker magazine, NBC Today co-host Matt Lauer lobbed this softball to President Obama in a pre-Super Bowl interview: "...you watching the big game on TV...on screen it's not the Patriots and the Giants. It's Mitt Romney and Newt Gingrich, same team, and they are pummeling each other. And look at the smile on your face there. Is art imitating life here?" [Listen to the audio or watch the video after the jump]

Obama began to answer: "Well, you know, look, I've been through these primaries, they're tough." Lauer quickly followed up: "But does this help you?" In an interview with Mitt Romney on Wednesday, Lauer promoted the same magazine cover and wondered about the ongoing primary race: "How can it not damage you?"

Alex Wagner made an eye-popping remark on her MSNBC program on Wednesday, as she hinted that she agreed with former Obama spokesman Bill Burton's assertion that Ronald Reagan would feel out of place in today's GOP. When Burton claimed that "Reagan wouldn't have a chance in this Republican primary right now," Wagner stunningly replied, "I think he'd be a Democrat probably" [audio available here; video below the jump].

The anchor, a former employee of the left-leaning Center for American Progress, also touted a quote from Thomas Mann of The Brookings Institution and Norman Ornstein of AEI, who claim in an upcoming book that the Republican Party has become "an insurgent outlier- ideologically extreme...scornful of compromise...and dismissive of the legitimacy of its political opposition."

Appearing as a guest on Wednesday's The Colbert Report on Comedy Central, New York magazine's John Heilemann - also an MSNBC analyst and formerly of The New Yorker - made a gay joke about GOP presidential candidate Rick Santorum as he described the competitive election in Iowa. (Video below)

After host Stephen Colbert, playing the part of committed conservative wanting to pump up Santorum, asked of the Iowa results, "So, Santorum, this is a victory, right? He may have lost, but it's a victory," Heilemann took a shot at the former Pennsylvania Senator in his response:

In an otherwise typically dismal column about President Barack Obama which is one part pity party and another part an attempt at building him a he-man reputation (not kidding), New York Times columnist Maureen Dowd describes an upcoming movie featuring the exploits of Navy SEAL Team 6 in the operation which killed Osama Bin Laden on May 1.

Dowd celebrates the fact that the movie's currently anticipated opening is October 12, 2012, describing it as "perfectly timed" and "just as Obamaland was hoping." She expects that it will "give a home-stretch boost to a campaign that has grown tougher," and "counter Obama’s growing reputation as ineffectual."

Here are the relevant paragraphs from Dowd's column, including reference to a New Yorker column about the operation which has become the subject of considerable controversy (bolds and numbered tags are mine):

On Monday, PBS talk show host Charlie Rose decided to discuss the passage of a "gay marriage" law in New York with two New York Times reporters and a writer for The New Yorker -- not exactly a divided or diverse panel. CNN legal analyst Jeffrey Toobin (also with The New Yorker) predicted to Rose that we're less then ten years out from the Supreme Court proclaiming "gay marriage" must be recognized in all 50 states:

The Washington Post on Friday took on Seymour Hersh's outlandish conspiracy theory that "neo-conservative" members of Opus Dei and the Knights of Malta inside the military "overthrew the American government" and are waging a "crusade" against Muslims. The newspaper reported that, contrary to Hersh's claims, General Stanley McChrystal was not a member of either organization, and that there was "little evidence of a broad fundamentalist conspiracy within the military."

Writer Paul Farhi began his article, "Hersh rebuked on 'crusaders,'" by stating that the journalist for The New Yorker's "latest revelation is drawing some puzzled reactions and angry denunciations." After recounting Hersh's accusations from his recent speech, that he "advanced the notion that U.S. military forces are directed and dominated by Christian fundamentalist 'crusaders' bent on changing 'mosques into cathedrals'" and his accusations against McChrystal and other members of the special operations community, Farhi continued that there "seem to be a few problems with Hersh's assertions," and quoted from the former general's spokesman:

In 1972, when George McGovern’s original running mate, Senator Thomas Eagleton, had to withdraw, Shriver defied the family pecking order by taking Eagleton’s place on the ticket. The Democrats had their problems that year, but Shriver wasn’t one of them. He was a magnificent candidate.

It's doubtful that the late Speaker of the House, Tip O'Neill (D-MA), who knew a thing or two about campaigning, would have agreed. 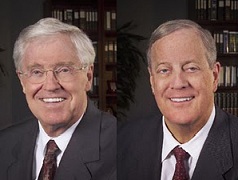 The Tea Parties are driving the liberals crazy. They charged that Tea Partiers were racists but that pretty much backfired on them when they were unable to collect on the $100,000 Breitbart prize offered for any video evidence of racial epithets that were supposedly hurled at congressmen on March 20 at the Capitol. Now it seems that they have gone back to the Nancy Pelosi charge of accusing the grassroots Tea Party of being an "astroturf" organization. And who is suposedly financing them? According to a New Yorker hit piece article written by Jane Mayer, much of the money is coming from businessmen brothers, Charles and David Koch.

Of course, any article complaining about businessmen contributing to conservative causes will have a big elephant in the room in the form of George Soros who pours hundreds of millions into the far left movement. And that elephant is so large that even Mayer can't ignore it. So what to do? Why, portray Soros as saintly. So start plucking your harps as you read the hilarious money quote Mayer employs to explain away this hypocritical matter by presenting the "benevolent" Soros floating upon his heavenly cloud:

Of course, Democrats give money, too. Their most prominent donor, the financier George Soros, runs a foundation, the Open Society Institute, that has spent as much as a hundred million dollars a year in America. Soros has also made generous private contributions to various Democratic campaigns, including Obama’s. But Michael Vachon, his spokesman, argued that Soros’s giving is transparent, and that “none of his contributions are in the service of his own economic interests.” 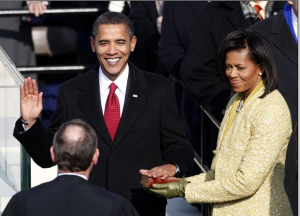 It's one thing for a so-called journalist to claim media members in 2008 were all taken with the historical notion of electing the country's first black President, but it's quite another to say they were right in doing so.

Despite the seeming absurdity, this is exactly what the Pulitzer Prize-winning editor of the New Yorker magazine told the Washington Post's Howard Kurtz Sunday.

After giving a few examples, Kurtz asked, "What came over the press in 2007 and 2008 when it came to Barack Obama?"

Readers are likely to find some of Remnick's answer quite disturbing (video follows with transcript and commentary):

Catching up on an item from the first episode of PBS’s Need to Know program, which aired on Friday, May 7, liberal satirist Andrew Borowitz suggested that Sarah Palin and Minnesota Republican Congresswoman Michele Bachmann are two of the Four Horsemen of the Apocalypse during the show’s regular "Next Week’s News" humor segment: "Former Alaska Governor Sarah Palin and Minnesota Congresswoman Michele Bachmann will announce that they are looking for, quote, ‘two additional horsemen.’" Imagery of fire burning behind Palin and Bachmann was shown as Borowitz read his item.

According to the New Testament’s Book of Revelation, the Four Horsemen of the Apocalypse are four beasts that will arrive before the end of the world, and will represent pestilence, war, famine and death.

As previously documented by NewsBusters, on the May 14 Need to Know, Palin was again targeted by Borowitz as he joked about the intelligence of both Palin and conservative Supreme Court Justice Clarence Thomas. Borowitz:

Blasting Elena Kagan for her lack of judging experience, GOP Senators will propose an alternative: Paula Abdul. As a judge on American Idol, Ms. Abdul often seemed absent and didn’t say anything. But one Senator will argue you could say the same thing about Clarence Thomas.

After poking fun at the idea of people protesting illegal immigration from Canada, and at what leftist Venezuelan leader Hugo Chavez may do with his new Twitter account, Borowitz returned to trashing the intelligence of conservatives:

And finally, some news out of Wasilla, Alaska. Sarah Palin will make it official: She has now written more books than she has read. When asked which of her two books is her favorite, Governor Palin will reply, "All of them."

Below is a transcript of the relevant segment from the Friday, May 14, Need to Know on PBS: