By Clay Waters | September 9, 2005 10:48 AM EDT
Friday's "news analysis" by Richard Stevenson, "The President From 9/11 Has Yet to Reappear," follows in the slanted footsteps of his previous one. The text box reads: "Still looking for vision in the face of national calamity." 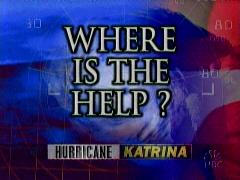 The misery and loss of life following Hurricane Katrina and the flooding of New Orleans make it the worst calamity to hit the United States since the terrorist attacks of September 11, 2001. But after 9/11, many journalists insisted that their correct stance was rigid neutrality, refusing to call terrorists "terrorists" and insisting objectivity would be compromised by wearing lapel pins with the American flag.

By Clay Waters | September 8, 2005 11:03 AM EDT
Tuesday's Times story by Simon Romero on the efforts of Houston businesses to assist in Katrina relief efforts was fairly unobjectionable -- but the version that appeared in the Times' international edition (the International Herald Tribune) contained some political raunch sure to delight European readers of a left-wing bent.

By Clay Waters | September 7, 2005 1:53 PM EDT
Louisiana Democrats can lambaste Bush and the federal government's response to hurricane Katrina all they want without objection from the Times. But let Republican Gov. Haley Barbour dare praise the federal response, and it "raises eyebrows." That's according to a Tuesday story from reporter Michael Cooper, "Bush Has Staunch Defender Amid Critics on Gulf Coast." The text box reads: "Praise for the federal response from a rising G.O.P. star raises eyebrows in his state."

Geraldo Rivera appeared on The O'Reilly Factor this evening to discuss what he said was a false story printed by The New York Times. Television journalist, Alesssandra Stanley wrote the following snippet that is hidden at the bottom her the article:

By Noel Sheppard | September 6, 2005 4:06 PM EDT
America’s media are, once again, predicting economic doom and gloom as a result of a natural disaster. Such predictions have been wrong before and, in the case of Hurricane Katrina, will likely turn out wrong again.

By Clay Waters | September 6, 2005 1:48 PM EDT
There was loads of competition, but perhaps the most cynical anti-Bush story to appear in the Times from the tragedy-filled holiday weekend came Monday from Adam Nagourney and Anne Kornblut, "White House Enacts a Plan To Ease Political Damage" which worked the cliches of a sinister Karl Rove trying to shift hurricane blame to New Orleans' Democrats.

NY Times Pumping Up the Clintons at the Bushes’ Expense

The NY Times today seemed so excited to see former President Clinton involved in hurricane relief that it practically ignored his partner in this pursuit, former President Bush.  In fact, this article refers to Mr. Clinton by name at least 17 times, his wife five times, while the former President Bush is actually only named twice.  From this, one would think that he’s such an afterthought that this effort should be called the Clinton-Clinton Katrina Fund.

What is also striking about this article is its condescending tone toward current President Bush:

Has David Brooks Been at the NY Times Too Long?

When David Brooks first joined the NY Times in September 2003, it initially seemed that he was going to be able to keep his conservative leanings, and would be a fine replacement for William Safire once the latter had retired.  However, lately it seems that Mr. Brooks is being co-opted by others on the Times editorial staff.

In fact, his latest op-ed sounds like it could have been written by either Paul Krugman or Maureen Dowd:

The scrapbook of history accords but a few pages to each decade, and it is already clear that the pages devoted to this one will be grisly. There will be pictures of bodies falling from the twin towers, beheaded kidnapping victims in Iraq and corpses still floating in the waterways of New Orleans five days after the disaster that caused them.

Katrina means that the political culture, already sour and bloody-minded in many quarters, will shift. There will be a reaction. There will be more impatience for something new. There is going to be some sort of big bang as people respond to the cumulative blows of bad events and try to fundamentally change the way things are.

Well, we all knew this was coming.  A New York Times editorial quite strongly suggests that income tax rates in our nation should now be raised as a result of Hurricane Katrina:

Congress and the president had better get the message: an extraordinary time is upon the nation. The annihilation in New Orleans is an irrefutable sign that the national tax-cut party is over. So is the idea that American voters cannot be required to accept sacrifice or inconvenience, no matter how great the crisis. This country is better than that.

Yep.  With higher fuel prices, along with what are sure to be higher heating and electricity bills this winter, what all those suffering from hurricane damages definitively need is higher federal income taxes.

In the days since Hurricane Katrina struck, there has been a lot of hand-wringing and finger-pointing at the Bush administration concerning budget cuts to the Army Corps of Engineers that might have shored up the levee system surrounding New Orleans/>/>.  The most recent such tirade comes fro

As depicted in a recent posting by NewsBusters own David Pierre, cable outlets like CNN have started to depict race as a "hindrance of choice" to the rescue efforts that are taking place on a massive scale in New Orleans/>/>.  Predictably, old media outlets like the New York Times have followed suit.