Yahoo picked up a fluff AP article that distorted Democratic NJ Governor Jim McGreevey’s 2004 resignation. It perpetuated the success of what should have been a politician’s attempt to cover allegations of corruption by using his closeted sexuality to distract an incurious and complicit media. This puff piece kept alive McGreevey’s pattern of announcing something socially startling to draw attention away from the incredible graft, scandal and alleged sexual harassment that would have otherwise defined his administration. When threats to McGreevey's reputation arise, he uses his status as a gay man to deflect unwanted attention, and the AP went along with it by reporting this latest “shocker” and omitting his political affiliation while identifying his opponents’ party (emphasis mine throughout):

Jim McGreevey has gone from altar boy to mayor to the nation's first openly gay governor.

From the moment he stood at a podium in 2004 and announced he was a "gay American" who was resigning because of an affair with a male staffer, people wondered what McGreevey's next act would be.

Now we know: He wants to become a preacher and a teacher.

In a stunning news conference in August 2004, then-Governor Jim McGreevey (D-NJ) acknowledged that he was "a gay American" and announced he was stepping down as chief executive of the Garden State. At the time McGreevey had some dark clouds hanging over his governorship, but the gay subplot distracted media attention from his ethically-plagued tenure.

Standing by his side throughout the press conference was the wife and mother of his child, Dina Matos.

The Washington Post placed a Republican Senate challenger on the front page of Monday's Style section, but David Segal's profile of New Jersey's Tom Kean, Jr. compared the candidate to a murderous Los Angeles street gangster: Kean, "who looks like a Mountie and fights like a Crip, isn't selling honesty and integrity so much as a brand name that represents honesty and integrity." Like other liberal reporters, Segal asserted it was too "complicated" to state that Democratic Sen. Bob Menendez is under federal investigation, and began the article by joking that if you took a drink every time Kean mentions federal investigation, "you would be drooling drunk 10 minutes after meeting the guy."

Segal, who is usually the rock-and-pop music critic for the Post -- but like many liberal media types, worked at the liberal magazine The Washington Monthly before hitting the major leagues -- started with an entertainment writer's breezy attack style: 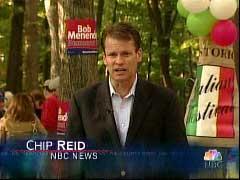 Aren’t reporters supposed to nail facts down for the public? On Tuesday’s NBC Nightly News, reporter Chip Reid explored the U.S. Senate race in New Jersey, but could not explain to viewers whether or not Sen. Bob Menendez is under federal investigation. "It’s not entirely clear who’s right," Reid claimed. As Menendez denounced Republican opponent Tom Kean Jr.

Omission Watch: Media Ignore Menendez Probe, Even As He Poses In Courtroom

While the national media begin to revisit the "corruption" issue -- largely as a Republican problem, as you can see from Monday's front page Washington Post story on GOP Sen. Conrad Burns -- it's important to remember where Democrats could have problems.

The Washington Post's political feature writer Mark Leibovich today reports on the jostling to succeed Sen. Jon Corzine in New Jersey, headlined "For Sen. X, D-N.J., the Line Forms to the Left." But the ideological label that might be expected in the text, Democrats on the "left," or "liberals," are never used.

By Clay Waters | November 9, 2005 9:21 AM EST
New Jersey and Virginia's tradition of odd-year elections for governor give the media ample fodder for speculation on how Democrats and Republicans will perform in future congressional and presidential elections. But for the New York Times, the Democratic successes of 2005 seem to have far more significance than did the Republican successes of 1993 and 1997.

Bloggers are beginning to speculate about a new scandal that may effect New Jersey gubernatorial candidate Jon Corzine.  Enlighten-New Jersey writes of an allegedly damaging videotape that may surface within the next few days.  At this point the story involves nothing more than speculation.

Journalism For Sale At The Newark Weekly News

When it was revealed that conservative columnist Armstrong Williams had received payments for advocating certain positions of the Bush administration, the MSM and the left had a field day. Williams was forced to defend himself on the morning talk shows and was parodied by syndicated cartoons. Most conservatives also rightly criticized Williams.