NBC Accuses Pentagon of Using Less Safe Body Armor… But is it?

Back on May 20th, the NBC News Investigative Unit excitedly reported that US Armed forces and the Pentagon may be forcing our soldiers to use body armor that is not as effective as newer models being produced. In an alarming TV report called "Are U.S.

Newsweek Portrays Dems as Answer to GOP and Big Government

The May 14 issue of Newsweek proclaimed that some descendants of famous Republicans--Teddy Roosevelt, Dwight D. Eisenhower and Barry Goldwater--are thinking about changing parties and voting Blue. In an article titled, “Generational Tensions: The sons and daughters of some iconic Republicans (Ike! T.R.!) are contemplating crossing the aisle,” reporter Michael Hirsch set up the improbable idea that the logical move by unhappy "fiscally conservative" Republicans is to the Democratic Party. According to Ike's granddaughter Susan Eisenhower, “moderate ‘Eisenhower Republicans’ “ are not content, but Newsweek did not fully explore the illogic of this proposed alternative (emphasis mine throughout):

Increasingly, however, she says that the partisanship and free spending of the Bush presidency—and the takeover of the party by single-issue voters, especially pro-lifers—is driving these pragmatic, fiscally conservative voters out of the GOP.

Debatably, the dissatisfaction of moderate Republicans with the Iraq war and with what the article categorized as religiously influenced issues surrounding topics like Terri Schiavo, abortion and homosexuality can be answered by the Democratic Party, but not the problems of bloated bureaucracies and out of control spending. The article did not state the obvious; a Big Government GOP is still smaller than the modern Democratic Party.

Diane Vadino, travel writer for MSN, seems to be just as disgusted by Americans who travel abroad as those foreigners whom she quotes in hers titled "How American Travelers Are Viewed Abroad: The U.K.". Vadino revels in the "ugly American" stereotype and seeks out all the Brits she can find to validate her point. She even "apologizes" to an Iraqi for the evil of U.S. foreign policy on her visit to England.

In what woefully promises to be the “first in a series”, Vadino wonders, “Which affects British perceptions more: Stereotypes of the ‘ugly American’ or our country’s foreign policy? Or is something else at play?”

I can only imagine how often Vadino will say how much we are hated because of our foreign policy in this series, but whatever is to come this first segment is chock full of hating Americans by Brits… even as they are happy to eat our fast food, watch our movies and listen to our music not to mention take our money.

In "Hezbollah builds a Western base," Pablo Gato and Robert Windrem of NBC News report:

Earlier today I wondered if MSNBC.com was bored with the Fort Dix terror plot story.

Well, here's an update. It appears they still are.

As of 7:00 p.m. EDT tonight, both FoxNews.com and CNN give the Fort Dix terror plot story prime real estate. Not so for MSNBC. See MSNBC screencap below and check here and here for Fox and CNN screencaps respectively.

What's the big story this morning? Both FoxNews.com and CNN.com are still going with the Fort Dix terror suspect arrests as the top story. But as the screencap below (taken at 11:15 EDT) shows, MSNBC.com has "Major Flood: Rising Midwest rivers spark comparison to deadly '93 deluge" as the top story. (screencap included after the jump)

Did you know that the Palestinian Authority believes Al Qaeda-linked groups are trying to assassinate Palestinian political leaders and are responsible for Sunday's deadly attack on a co-ed children's festival at a UN-run elementary school in Gaza? What about the attackers using sharia law as the reason? No? Well, if you weren't reading a handful of the foreign press, you wouldn't know. What little US reporting there was, as is often the case,  was based on the AP. Unfortunately, the AP omitted any Al Qaeda references, the rise of Salafism [which the article explained is a branch of Islam that is often referred to as Wahhabism—"a derogatory term...” to many adherents] as well as the “other al-Qaida-linked groups” terrorizing Gaza and the resulting violent enforcement of sharia:

The Jerusalem Post's Khaled Abu Toameh led with what should be the most important parts of this story, especially to US readers (emphasis mine throughout):

Palestinian Authority security officials accused supporters of al-Qaida in the Gaza Strip of carrying out Sunday's attack on a UNRWA-run school [U.N. Relief and Works Agency] in Rafah in which one person was killed and six others were wounded.

"There is no doubt that al-Qaida is operating in the Gaza Strip," a senior PA security official said. "Today's attack carries the fingerprints of al-Qaida." (...)

The Grand Old Party Is In Trouble

By Edward L. Daley | May 5, 2007 6:28 PM EDT
Apparently the entire Republican party has lost its collective mind, as is evidenced by the fact that the GOP's presidential candidates agreed to let a partisan, liberal hatchet-man like Chris Matthews[1] run their first national debate[2] on Thursday evening. Along for the ride were John Harris[3] and Jim VandeHei[4] of The Politico.com, who's questions actually made Matthews' blatantly anti-rightwing interrogatives seem almost unbiased in comparison.

Venezuelan Seizure of Oil Fields a Footnote to MSNBC.com 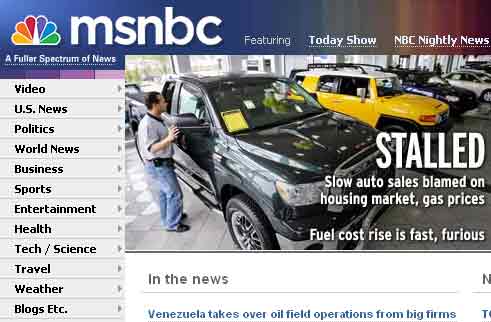 The screencap at right is a few hours old, but the visual was striking to me. 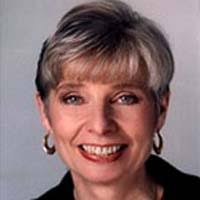 Newsweek’s April 30 article by Eleanor Clift recycled old gun-control mythology and misleading statements with a renewed call for something to be done in the wake of the Virginia Tech shooting. The article mixed the usual anti-gun talking points with some subtle pining for the good ol’ days of President Clinton’s Federal Assault Weapons Ban (AWB) that supposedly made the streets safer by taking the extra, extra, super-scary looking guns out the hands of all Americans (except for the criminals who obtained them illegally, of course). Clift starts off with one of the more ridiculous statements (emphasis mine throughout):

Rahm Emanuel was once a fierce gun-control advocate. As a top aide to Bill Clinton, he helped push the president's assault-weapons ban. At the time, Emanuel argued there was little reason for anyone to have a military-style weapon designed to kill as many people as possible in the shortest time.

In 1995, Bill Clinton said this to a Houston fund-raising audience about the 1993 tax increase his administration is infamous for:

Probably there are people in this room who are still mad at me at that budget because you think I raised your taxes too much. It might surprise you to know that I think I raised them too much too.

If you run a policy group in Washington, your chances of getting on network television are slim if you happen to advocate for a cause not favored by liberals. Your chances are even worse that anything you say won't be slapped with a "conservative" label to warn viewers of your perspective.

That's a good thing. Most groups can be placed somewhere on the political spectrum and that placement should be disclosed to the news consumer. The unfortunate thing, however, is that if you're a liberal group, your affinities often are not disclosed.