The woman that poses as Barack Obama on all his social networking websites such as Facebook, MySpace, and Twitter is connected to the far-left organization MoveOn.org.

For those scratching their heads, the President in theory is a member of these websites. However, he obviously isn't responsible for typing in the little messages that are going out to his followers almost 24 hours a day, seven days a week.

On Friday, the Wall Street Journal revealed the identity of the current Twitterer as Mia Cambronero.

Our friends at Sweetness & Light have discovered that she is a senior fellow at the New Organizing Institute which is described by Discover The Networks (h/t Story Balloon):

By P.J. Gladnick | January 20, 2009 9:43 AM EST
Grab your barf bags. You're going to need them when viewing this video produced by Demi Moore and Ashton Kutcher, featuring celebrities making sacred pledges to lord Barack Obama to support a whole host of trendy causes as well as feel-good poses and posted at MySpace Celebrity. Here is how the "Presidential Pledge" is described:

Ashton Kutcher and Demi Moore team with MySpace Celebrity and celebrate Barack Obama's presidential inauguration in a truly inspiring way with The Presidential Pledge, a moving video directed by Demi and produced by Ashton’s Katalyst Films. Reflecting Barack’s call for change, the film features over 50 of the biggest stars in Hollywood revealing how they plan to personally participate in keeping America strong, proud and green. The clip will be presented to our new President during his inaugural celebration.

For the fourth straight weekday as Barack Obama vacations, he received better coverage on the broadcast network evening shows than the non-vacationing John McCain. Without fresh video of Obama, the CBS Evening News came up with a new way to tout Obama's campaign as they compared the Web sites of the two candidates and declared Obama's far superior. Reporter Daniel Sieberg asserted “McCain's Web site is still playing catch up to Obama's use of cyberspace.” Turning to “Web design expert Doug Jaeger,” Sieberg echoed Joe Biden in applying the term “clean” to Obama as he highlighted how “Jaeger describes Obama's site as clean; and McCain's as cluttered.” Jaeger complained about JohnMcCain.com: “He's using lots of different typefaces at all different sizes which gives you a feeling of chaos.”

Sieberg soon trumpeted how on BarackObama.com “kids have their own special area, including a logo to color,” while the dour McCain “offers a game called Pork Invaders on his Facebook page,” but if you do well, Sieberg sarcastically noted, “you're rewarded [pause] with a statement about pork-barrel politics.” Withe the contrasting numbers on screen, the CBS reporter also championed Obama's transcendence on social networks which are largely only used by younger people:

The Obama campaign may hope the Internet will do for Obama what television did for John F. Kennedy in 1960. Just compare the candidate's popularity on the social networking sites Facebook and MySpace. While both campaigns hope their supporters spread the word, Obama is "friended" almost seven times more than McCain. 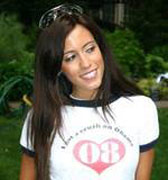 It's generally bad for business to have a flippant employee who insults your loyal customers. Now if someone could just give that newsflash to the Associated Press.

The AP today picked up on the plight of one David Noordeweir, who was fired in late February from a Michigan Wal-Mart for an entry on his MySpace page that insulted the intelligence of Wal-Mart shoppers. Here's the lede.:

A former Wal-Mart cashier says he was fired for joking on his MySpace page that the average IQ would increase if a bomb were dropped on the company's stores.

Gee, nothing insulting or inflammatory there.

I want my MTV! Somewhere a soldier or sailor in Iraq or Afghanistan is probably thinking that today. According to the AP, on May 14, the Department of Defense blocked “worldwide” the US troops who use its networks and computers from accessing 12 popular websites that include, YouTube, MTV, MySpace, Blackplanet and Photobucket. The Defense Deparmene which the DoD said“take up a large amount of bandwidth, and others that can open up department computers to hackers and viruses.” (emphasis mine throughout)

US Forces Korea Commander (USFK) Gen. B.B. Bell explained in a memo sent out Friday that the new policy will not impact the military's ability to send and receive email, but the “Department of Defense has a growing concern regarding our unclassified DoD Internet, known as the NIPRNET. The Commander of DoD's Joint Task Force, Global Network Operations has noted a significant increase in the use of DoD network resources tied up by individuals visiting certain recreational Internet sites.”

The AP delved into some of the issues involved:

The Battle for Obama's Space

For the past two and a half years, the page has been run by an Obama supporter from Los Angeles named Joe Anthony. At first, that arrangement was fine with the Obama team, which worked with Anthony on the content and even had the password to make changes themselves.

But as the site exploded in popularity in recent months, the campaign became concerned about an outsider having control of the content and responses going out under Obama's name and told Anthony they wanted him to turn it over.