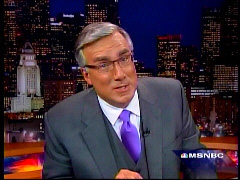 Even better, the story was actually precipitated by an article read on the air Friday afternoon during -- wait for it!!! -- Rush Limbaugh's radio show.

But before we get there, embedded below the fold is the video and partial transcript from Friday evening's "Countdown" on MSNBC:

Since former Vermont Gov. Howard Dean stepped down as the chairman of the Democratic National Committee, he has ventured into other opportunities.

One of those opportunities was to be a business pundit for the financial news channel CNBC, even though Dean's background prior to politics was in medicine. But just over a week later, in an e-mail dated April 2 to MoveOn.org mailing list subscribers, Dean wrote he was leaving Washington to hit the campaign trail "to help President Obama win health care for all." The Washington Post published an extensive investigative piece about Treasury Secretary Timothy Geithner on Friday which was a collaboration with the far-left media outlet ProPublica (h/t Carter Wood).

As NewsBusters executive editor Matt Sheffield and I reported last September, ProPublica was founded by Herb and Marion Sandler, the California billionaires that have contributed millions to liberal causes and entities such as MoveOn.org and the Clinton front-group Center for American Progress.

Readers might recall the Sandlers being lampooned by "Saturday Night Live" last October for having a hand in the financial crisis. NBC later caved to pressure from the couple and edited out any reference to them in the video of the skit posted at the network's website (Pat Dollard still has the full video here).

Throughout George W. Bush's presidency, insults were doled out repeatedly about the commander-in-chief and that was just a fact of life for the highest-ranking public official in the land. However, now there's a new president, there seems to be a different standard on how you talk about a president.

"Well, some folks are naturally graceful, some not so much," Sanchez said. "By that measure alone, radio yacker Rush Limbaugh is the polar opposite of our Commander-in-Chief, Barack Obama. Now, you can just disagree with Barack Obama on his leadership, perhaps his policies. But it's hard not to at least acknowledge the ease with which America's 44th president handled himself in London on a global stage, even among royalty."

More and more people are starting to take notice of CNBC's dramatic shift to the left and the liberal groups promoting it.

On Fox News Channel's March 27 "The O'Reilly Factor," host Bill O'Reilly and Bernard Goldberg, author of "A Slobbering Love Affair: The True (And Pathetic) Story of the Torrid Romance Between Barack Obama and the Mainstream Media" took a look at trends pointing to this shift that started after the feud between "Mad Money" host Jim Cramer and "The Daily Show" host Jon Stewart.

O'Reilly cited a column written by NewsBusters Associate Editor Noel Sheppard on March 26 for The Washington Examiner that noted some of the things indicating CNBC's leftward swing.

Olbermann Challenged: 'Do You Have the Backbone to Debate Me?' 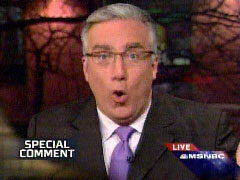 A health policy expert who Keith Olbermann eviscerated during Thursday's "Countdown" (video embedded below the fold) has officially challenged the disgraceful MSNBC personality to a debate concerning provisions in the soon to be enacted stimulus plan.

If Keith Olbermann of MSNBC could defend the health provisions slipped into the stimulus bill on their merits, he wouldn't be resorting to personal attacks on me. Olbermann calls me a shill funded by the drug industry (2-12-2009). That's not true...If Keith Olbermann has the courage, I invite him to debate me on his program...Mr. Olbermann, do you have the backbone (and the facts) to debate me?

Our story began last Monday when McCaughey published the following at Bloomberg:

The Obama economic adviser who doesn't want infrastructure "stimulus" spending to only benefit "white male construction workers" is angry at Rush Limbaugh, Sean Hannity, and Michelle Malkin for having the nerve to report his racist remarks the mainstream media compliantly boycotted for several weeks.

In an open letter posted at his blog Saturday, former Clinton Labor Secretary Robert Reich accused the trio of "manifestly distorting [his] words and pulling them out of context."

Ironically, Reich used as his character reference the George Soros-funded Clinton front-group Media Matters for America which on a daily basis manifestly distorts people's words and pulls them out of context (h/t Michelle Malkin):

The good folks at Media Matters for America are displeased with the New York Times having the nerve to point out the hypocrisy inherent in environmentalists destroying the environment.

For those that don't actually care about such things, the Sundance Film Festival began last Thursday, and as the video embedded right demonstrates, the organizers are supposedly going to great lengths to make this year greener than ever.

Unfortunately, such efforts seem to be failing according to an article published in the Times Arts section Saturday.

This didn't sit well with MMA's Eric Boehlert who in a posting at the group's County Fair blog Sunday seemed oblivious to his own hypocrisy:

Meet the Money Behind the Liberal New Media Machine

Have you ever considered who's financing the various new media outlets spreading extreme-liberal viewpoints around the country?

Most people think the biggest source is George Soros. However, there are others that are not necessarily household names, but are having a huge influence on the state of journalism today and in the future.

More importantly, they're on a mission to redefine the political landscape in ways you might not have imagined.

As reported by NewsBusters Matt Sheffield and Noel Sheppard in the September issue of the Capital Research Center's "Foundation Watch":

From a non-Jew, it would smack of anti-Semitism.  From Eric Alterman? You be the judge.

The author of the Altercations column at Media Matters has a running complaint:  Rick Klein, editor of The Note at ABC News, pays too much respect to the work of other Jewish pundits. Jennifer Rubin, one of the chief bloggers at Commentary's "Contentions" blog, was Alterman's first target, in his August 1 column [emphasis added throughout]:

I realize I may be the only person in the world to care about this, and I only care a tiny bit, but what does Commentary's Jennifer Rubin have on The Note's Rick Klein?

I realize that Mr. Klein is, in many respects, a fully-worked ref, citing right-wing publications that have proven consistently wrong about everything throughout the past eight years -- following the requisite ABC advertising which justifies the expense of the effort to his corporate overlords -- while ignoring those on the center-left who have proven right. But even so, Commentary? Come now. The guy cites her every day. Are they dating? Did his mother lose a bet to her mother playing canasta in Boca?