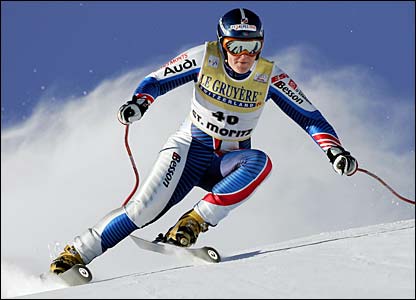 According to McClatchy News, if you ever want to ski the Alps or dive the Great Barrier Reef, you'd better do it soon because global warming will make both impossible in the years to come.

Never mind that Europe received more snow this winter than it has in many years, as such facts are totally irrelevant to climate alarmists thanks to the propagandist practices of their hero Nobel Laureate Al Gore.

In an article entitled "10 Places to go Before Global Warming Hits Hard," McClatchy's Judy Wiley did her darnedest to get people to travel the world regardless of the obvious hypocrisy in such behavior adding to the so-called problem (emphasis added):

McClatchy News -- the paper chain that likes to claim they speak "truth to power" -- is pleased to show us "another side" to the Iran backed Iraqi militia leader Muqtada al Sadr and that other side is his supposed "charity work." It has been a common tactic of Muslim warlords and other terrorists to pretend at "charity" as they plan suicide bombings and targeted terror attacks among the very people they pretend to be helping with their "charity." The so-called charity is but a screen to hide their terror activities behind, a salve to keep the locals from getting too uppity. But, McClatchy had their hearts go aflutter over Sadr's "humanitarian aid" imagining it to be the "other" softer side of the terror chieftain giving Sadr a nice little bit of free positive publicity quite despite the truth of his murderous actions.

The McClatchy piece written by Shashank Bengali with the assistance of Leila Fadel and special correspondent Hussein Kadhim, detail all the wonderful works of Sadr as he helps people so brutally harmed by... you guessed it... the United States military.

Never mind nightly TV newscasts are geared toward older generation. Never mind scandals like Dan Rather and the falsified National Guard documents leading up to the 2004 presidential elections have caused people to look for their news from other sources like the Internet and talk radio.

Former "CBS Evening News" weekend and fill-in anchor and NBC's "Meet the Press" and "Nightly News" co-anchor Roger Mudd places the blame for the decline of television news on there being too many choices - with cable television.

"[B]ut there were so few [good TV news writers] because we became dependent on pictures and that coupled with deregulation of television, when you had three, four networks - and suddenly, there are 20, then there are 50 and now there are 300 and however many - 500," he said. "And as a consequence, the pie that used to be sliced three or four ways is now slivers and as a consequence, everybody is trying to hold on to their little audience and to do that, you got to entertain."

You gotta love McClatchy "Truth to Power" Newspapers. Not for their reporting, but for their entertainment value. McClatchy editors last night won an MRC DisHonors Award for an October 2007 headline that bemoaned the drop in business Iraqi gravediggers saw with the drop in violence thanks to the U.S. military surge.

Now the newspaper chain is highlighting the rampant online speculation on whether a photo of Dick Cheney shows a naked woman in the reflection of the vice president's sunglasses. Yet not until deep in the article did reporters Kevin G. Hall and George Bridges render a McClatchy photo editor's verdict: the reflection in the glasses is of Cheney's hand holding his fly fishing rod.

You can't make this stuff up. (see screencap below the page break)

The winner of the MRC's 2008 Dan Rather Memorial Award for Stupidest Analysis went to the editors of McClatchy Newspapers for an October 16 headline that spun the good news of the surge's success in Iraq into a tale of woe for Iraqi gravediggers. See, with the success of the surge and the corresponding drop in violence and death, Iraqi cemetery workers were "feel[ing] the pinch" to quote the headline.

We blogged about this at the time at NewsBusters here. You can find the article still archived at McClatchy here.

McClatchy’s Wright-Obama-TUCC Expose: How Many Will Get to See It?

Yesterday, Gateway Pundit noticed what he called an "Uh-Oh... This wasn't supposed to happen" event for presidential candidate Barack Obama:

An amazing article appeared in the mainstream news today. McClatchy actually reported that Obama's church merges Marxism and Christian Gospel and preaches that the white church in America is the Antichrist because it supported slavery and segregation.

That they did. But how did they headline it, and how many McClatchy newspapers actually ran the story?

Margaret Talev's Thursday, March 20 description of the fundamental doctrines of the Rev. Jeremiah A. Wright's Trinity United Church of Christ (TUCC) does get right to the point. Talev even goes so far as to question the candidate's motivations for his involvement with the church.

Most importantly, which I why I've bolded the related text, Talev notes that while TUCC's radical and racist philosophies will survive the Rev. Wright's retirement, their continued presence will not deter Obama from continuing to attend: 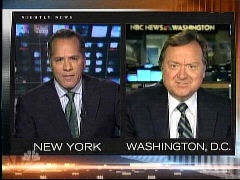 Asked by NBC Nightly News anchor Lester Holt on Sunday evening about how a new MSNBC/Mason-Dixon poll found that Iraq is not “the dominating issue” as “the economy is immensely important to voters,” Tim Russert suggested Hillary Clinton and Rudy Giuliani will have “to re-calibrate” for “a bread and butter election” since “with the surge in Iraq and the level of American deaths declining, it is off the front pages.” Iraq is also now of less interest to the television networks.

In conjunction with the tour for his new book Whitewash, NewsBusters publisher and MRC president Brent Bozell was invited on to FNC's "Fox and Friends" to discuss the liberal media's constant search for bad news in Iraq.

In his Thursday appearance, Bozell noted that things are so ridiculous that some liberal journalists are bemoaning how fewer deaths in Iraq harms the cemetery business there. Watch the video above, on YouTube, or download the video in Windows Media, Real or listen to MP3 audio.

Transcript is below the fold...

Can't Make These Up: Old Media Searching Desperately for Bad News from Iraq

The search for bad news relating to Iraq must be getting awfully difficult.

First example -- From the "Looking for, and Not Finding, a Dark Cloud on a Sunny Day" Department (HT Confederate Yankee, who says "you can almost feel their pain"):

'Fragging' Is Rare in Iraq, Afghanistan

McClatchy News: Bush Will Rank at Bottom in Presidential History

Here we go again with another pointless Bush bashing presidential rating story filled with quotes from partisan, hack "historians." In this report, Bush doesn't have "many achievements" and will finish "mired in an unpopular war" unless, of course, that war mysteriously happens to "unexpectedly" turn out alright and he is "destined for the failed presidents' club." Forget the fact that what a president does in office will not be assessable for at least 10 years after he leaves office, forget that these historians change their ideas on who is a good president every decade, forget that these "historians" are part of the far left University system we are saddled with. These "ranking" stories are always full of partisan left nonsense and this one is no different.

Not Much Analysis in This ‘Analysis’

At first glance, this piece entitled “Analysis: Who should control how we get political news?” seemed like a good thing: