The media is attempting to ethnically vitiate Sen. Ted Cruz across multiple platforms and in different languages.

In his story (saved here for future reference, fair use and discussion purposes — and in case it gets edited later today; Update: It did) on the Supreme Court's decision this morning upholding Michigan voters' 2006 approval of a ban on race-, ethnic- and gender-based preferences in university admissions, USA Today's Richard Wolf failed to identify the size of the court majority, which was 6-2. Justice Elena Kagan recused herself because she was previously the U.S. solicitor general before being named to the high court. The court's decision effectively upholds such bans in seven other states.

Additionally, by focusing on Justice Anthony Kennedy as "the man to watch," Wolf initially left many readers with the impression that only five justices, Kennedy and the four others usually describe as "conservative" (Roberts, Scalia, Thomas, and Alito) made the ruling. The fact is that they were also joined by Justice Stephen Breyer, one of the supposedly reliable "liberals." Excerpts follow the jump (bolds are mine throughout this post):

Isn't this rich? The New York Times, in a Sunday story placed on the front page of Monday's print edition, took shots at another news organization for leaking sensitive intelligence. The Old Grey Lady must think we all have short memories.

Unfortunately, Dylan Byers at the Politico does have a short memory — either that, or he's protecting the sacred Times and its history-challenged reporters Eric Schmitt and Michael S. Schmidt. Here's how Byers lays out the situation (bolds are mine throughout this post):

Bernanke's 'If We Were to Tighten, the Economy Would Tank' Comment Ignored by AP, Politico, and Others

Today, as the wire service AFP reported in a story carried at Yahoo.com, Federal Reserve Chairman Ben Bernanke, in the question and answer exchange after his prepared testimony, told the House Financial Services Committee that "If we were to tighten (monetary) policy, the economy would tank."

That assessment of the economy's fragility qualifies as news, especially given the Obama administration's continued claim that the economy is "continuing to recover at a promising rate." Outlets besides AFP virtually ignored Bernanke's soundbite, which should be considered scary to anyone who realizes that Big Ben can't go on "stimulating" at his current rate forever.

Pope Plugging Leaks Is News at AP; But Not Obama's Insider Threat Program

A report today from Nicole Winfield at the Associated Press, aka the Administration's Press, headlines the news that Pope Francis's revision and update of Vatican City laws "criminalizes leaks." Meanwhile, searches on relevant terms at the AP's national web site ("leaks"; "insider threat" "McClatchy"; all not in quotes) return either nothing, or nothing relevant.

AP's apparent decision thus far to ignore McClatchy's latest story on the Obama administration's unprecedented "Insider Threat Program," which requires federal employees to snitch on each other for "suspicious behavior" or face serious discipline and even prosecution, is -- well, readers can pick their own adjectives after reading excerpts from McClatchy's latest item which follow the jump.

Much of the Press Calls Now-Nixed Partial Account Seizure in Cyprus a 'Tax,' Avoiding 'Seizure'; AP a Notable Exception

Much of the press is describing the EU's demand that Cyprus seize a portion of bank account holders' deposits, a demand rejected yesterday by the island nation's legislature, as a "tax."

I think it's reasonable to suggest that this characterization is designed to minimize the frightening authoritarianism the EU has just attempted. In a bit of a pleasant surprise, one organization openly calling the move an attempt at "seizure" is the Associated Press.

Today, our friends at Twitchy reported that Lee Judge, a left-wing political cartoonist, illustrated a depraved caricature depicting the grave of ex-sniper, and Navy SEAL, Chris Kyle – with the caption “if only there had been a good guy around.”  This is wholly insensitive, and a craven attempt to smear an American hero who was tragically slain by a fellow veteran whom he was helping cope with PTSD.

But this is hardly the first time Judge has inked a cartoon that transgresses the bounds of decency in service of a left-wing political argument. For example, when the NRA first proposed armed guards in schools back in December, Judge thought it was clever to suggest that Adam Lanza, the perpetrator of the Sandy Hook shooting, would have been the perfect candidate for such a job.  In another cartoon, the Kansas City Star cartoonist also insinuated that guns rights activists only care about their firearms, and not protecting children.

NewsBusters continues to showcase the most egregious bias the Media Research Center has uncovered over the years — four quotes for each of the 25 years of the MRC, 100 quotes total — all leading up to our big 25th Anniversary Gala on Thursday, September 27.

Click here for blog posts recounting the worst of 1988 through 2006. Today, the worst bias of 2007: ABC fawns over newly-installed Speaker of the House Nancy Pelosi; Rosie O’Donnell insults the troops; and a McClatchy headline writer finds a downside to good news in Iraq. [Quotes and video below the jump.]

File the news in this report filed late yesterday afternoon by Michael Calderone and John Cook at Yahoo's Upshot Blog under "D" for Double Standards:

White House reporters mum on Obama lunch, even as papers back transparency

White House reporters are keeping quiet about an off-the-record lunch today with President Obama — even those at news organizations who've advocated in the past for the White House to release the names of visitors.

But the identities of the lunch's attendees won't remain secret forever: Their names will eventually appear on the White House's periodically updated public database of visitor logs.

... The Obama White House began posting the logs in order to settle a lawsuit, begun under the Bush administration, from Citizens for Responsibility and Ethics in Washington (CREW), which sought the Secret Service's White House visitor logs under the Freedom of Information Act.

... And guess who filed briefs supporting that argument? Virtually every newspaper that covers the White House. 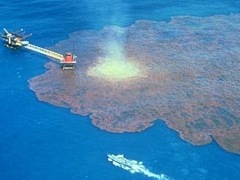 Karen Nelson of the Biloxi Sun Herald wrote a report picked up by McClatchy Newspapers about the incredible level of frustration felt by the people living along the Gulf of Mexico over the severe lack of skimmers available in that region to combat the BP oil spill. She went into detail explaining the anger felt by the Gulf residents over the fact that few skimmers are cleaning up the oil. However, one thing that seems to be mostly ignored, except in passing, is WHY so few skimmers are currently in the Gulf.

First the frustration felt over by the Gulf residents:

GULFPORT, Miss. — A morning flight over the Mississippi Sound showed long, wide ribbons of orange-colored oil for as far as the eye could see and acres of both heavy and light sheen moving into the Sound between the barrier islands. What was missing was any sign of skimming operations from Horn Island to Pass Christian.

You would think that in the midst of the liberal media's fight to rip Arizona's Immigration Law, that the phrase ‘illegal immigrant' would be fairly easy to use in an appropriate manner.  Yet that is seemingly only the case when the phrase is used to cast common-sense immigration enforcement as discriminatory.  But when it comes to a story that could shed light on why enforcement is a necessity for the safety and security of a nation and its people, then the phrase - no matter how accurate - is quickly forgotten.

One high profile case, the murder of Chandra Levy, highlights this fact.  It has been quite some time (over a year) since Ingmar Guandique was charged with Levy's murder, and much longer since he was identified as being an illegal immigrant from El Salvador.

And while Guandique's illegal status isn't necessarily news to those having actually followed the case, you would think it was still an unproven fact based on media reports past and present.

As a recent update reveals, attorney's working on behalf of Guandique argued that he would not get a fair trial in Washington, though a judge has now determined that the trial will indeed stay in DC.  Coinciding with this news, is the recent release of a book covering the case entitled, Finding Chandra. With these updates, one has to wonder how far the media has come in their willingness to report the truth.  How far have they come since Michelle Malkin noted a perfect record of going 115 for 115 in reports failing to mention the suspect's illegal status back in 2002?  As it turns out, not far at all...

As the Obama-loving media continue their predictable victory lap following the passage of vastly unpopular healthcare reform, a state of mass confusion about how the bill impacts John and Jane Q. Public grips the nation.

"'They're saying, "Where do we get the free Obama care, and how do I sign up for that?" said Carrie McLean, a licensed agent for eHealthInsurance.com. The California-based company sells coverage from 185 health insurance carriers in 50 states."

And those were just the first surprises from the historically liberal news outlet (h/t NB reader Tom 'Not the Actor' Hanks):