April 17 marked the 13th annual "Day of Silence," a gay rights protest event sponsored by GLSEN (Gay, Lesbian and Straight Education Network) that takes place in schools across the nation. Of course, gay groups can afford to be silent for a day, because they have the mainstream news media to speak for them.

Predictably, the media covered this year's event in a positive manner, leaving little room for discussions of it as an indoctrination tool pushed on students by gay activists. And they certainly didn't report that the LGBT community and its allies don't have a problem with "name calling, bullying and harassment" when it's directed against people who disagree with them.

Want to appear as a champion of a cause without being held to account for the hateful name-calling you did in the name of your cause? Appear on CNN's "Larry King Live."

Perez Hilton, author of the celebrity gossip site PerezHilton.com, who advocates that gay marriage should be legal, got to do just that. Hilton, coming off his appearance as a judge for the Miss USA pageant on April 19, appeared on Larry King's April 20 CNN broadcast and explained why he asked Miss California, Carrie Prejean, what she thought of gay marriage (video embedded below the fold):

"Well, I was given the opportunity, on this national platform to ask a question that I thought was relevant. And given the recent setbacks and advances that we've made in the fight for gay marriage, I thought it was a very important question for me specifically to ask."

We're nearly 24 hours out of Earth Hour and the media are already proclaiming it a success as Michael Bates pointed out for NewsBusters in a blog post earlier today.

"I pulled up to Al's house, located in the posh Belle Meade section of Nashville, at 8:48pm - right in the middle of Earth Hour," Johnson wrote and reprinted on the Washington Examiner's blog on March 29. "I found that the main spotlights that usually illuminate his 9,000 square foot mansion were dark, but several of the lights inside the house were on."

You too can save the planet from the effects of carbon emissions by participating in the symbolic gesture of turning off one light switch at a time for Earth Hour on March 28.

That's the message from actor Edward Norton, the official U.S. ambassador for Earth Hour 2009, who appeared on CNN's "Larry King Live" on March 25. As Norton explained, this is a symbolic event for which everyone turns out their lights from 8:30 p.m. to 9:30 p.m. local time on March 29. And this act will encourage world political leaders to cap or tax carbon emissions through the legislative process by demonstrating "global unity."

"You're right. The act of turning out the lights for an hour - is, it's not an act of conservation," Norton said. "It's not, um, meant to say that, ‘By doing this, we're going to solve the problem.' I think it's a symbolic act of global unity, of highlighting the number of people who do think this is one of the central issues of our time and motivating our leaders to take, um, purposeful and aggressive action on this issue." 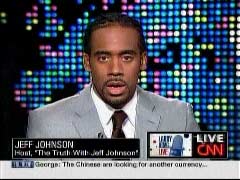 By P.J. Gladnick | March 24, 2009 10:16 AM EDT
For the record, Laura Ingraham never actually called Meghan McCain fat. However, Ingraham has been dead on hilarious in her imitation of Meghan's mindless sounding Valley Girl accent. A quick listen to Ms McCain's voice on this video clip of her appearance on CNN's Larry King Live last night brought back memories of the years your humble correspondent spent in the San Fernando Valley area of Los Angeles, birthplace of the Valley Girl accent which, unfortunately, spread to many parts of the country. That Valspeak accent still painfully reverberates in my ears yet despite my earnest hope that it would die a permanent death, along comes Meghan McCain to resurrect that annoying sound in interview after interview in her quest for eternal publicity for herself.

So how does someone who sounds so annoyingly vacuous rate so much publicity? Simple. When a Republican (or relative of a prominent Republican) slams Republicans and/or conservatives, such a person will be enthusiastically given a national forum by the MSM. Even someone like John McCain's daughter who doesn't really sound all that interested in political issues. As you can see in this interview, Valley Girl McCain seems much more enthusiastic rambling on about how she was supposedly "dissed" by Laura Ingraham and carefully pondering which tattoo to choose for her wrist. First Larry plays a video clip of Barack Obama laughing while discussing the economic crises during his 60 Minutes interview with Steve Kroft then asks Meghan for her "learned" input:

President Barack Obama's much talked about bowling gaffe on Thursday's "Tonight Show" was good according to CNN's Larry King because it focuses attention on the Special Olympics.

Although it was predictable that such rationalizations would be heard from the Obama-loving media, one really has to wonder whether King and his ilk would have seen any upside if former President Bush had made such a disgraceful comment on national television.

While you consider the unlikelihood of such, as well as the double standard it implies, take a gander at the pained look on the face of Special Olympics Chairman Timothy Shriver when King on Friday's program played him the tape of Obama's comments (video embedded below the fold with partial transcript, link available here for Internet Explorer users):

CNN’s Sanjay Gupta filled in as host on Larry King Live on Wednesday, six days after ending his bid to be Obama's surgeon general. Despite his medical training, he did not see fit to correct former President Bill Clinton after he repeatedly referred to human embryos as not being fertilized.

During his initial question, Gupta referred to Clinton as “someone who studied this,” but after he made his erroneous assertion the first time, Gupta only asked if the former president had “any reservations” to stem cell research that would destroy human embryos. Clinton would go on to make this false characterization five more times in his answer to Gupta’s lone follow-up.

Gupta's interview with the former president was devoted mainly to health care reform. The brain surgeon brought up the issue of embryonic stem cell research after he observed that Clinton’s finger sometimes shook when he pointed it. When Clinton clarified that he had consulted with a doctor, who told him in wasn’t Parkinson’s Disease, Gupta asked the former president about President Obama’s decision to remove the limitations on federal funding for the embryo-killing research: “There was a federal -- an order today providing federal money for embryonic stem cell research. First of all, let me just ask you, as someone who studied this, is this going to always be as divisive an issue as it is now? Is this going to be the abortion of the next generation, or are people going to come around?”

Lib Talker: 'Maybe Limbaugh Should Be Executed For Treason'

On Tuesday, liberal talk radio host Stephanie Miller called Rush Limbaugh's now well-publicized statement about wanting Barack Obama to fail "treasonous," and wondered if he should be executed for saying such a thing.

Miller made this rather provocative comment on CNN's "Larry King Live," and oddly nobody batted an eye or seemed at all put off by it.

Not surprisingly, the topic of discussion between King and his guests -- which other than Miller included the Huffington Post's Arianna Huffington, conservative talk radio host Lars Larson, and GOP strategist Nancy Pfotenhauer -- was all the brouhaha surrounding Limbaugh (video embedded below the fold with partial transcript, relevant section at 1:25, h/t NB reader David Wells):

"The View's" Joy Behar subbed for Larry King on CNN Thursday evening, and her first guest was -- wait for it!!! -- conservative author Ann Coulter.

The bullets were flying early:

ANN COULTER: In fact, [Barack Obama's] increasing the war in Iraq. He's continuing the rendition. I think either he knew this all along or he got in, got the national security briefings and said I can't let "The New York Times" run national security. That's too dangerous. So I had high hopes for him the first few weeks, though the stimulus bill sort of dashed those.

JOY BEHAR: So you would like him to continue torturing people, is that what you're telling me?

Yeah, baby!!!  Part one is embedded right. Parts two and three along with a full transcript are below the fold (courtesy our dear friend Ms Underestimated):

Bill Maher on the U.S.: 'It's Still Not a Very Bright Country' 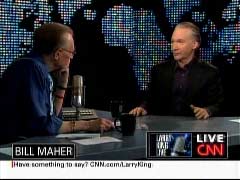 Despite the election of President Obama, Bill Maher is still not happy with his native land, due to the lack of belief in evolution. He voiced his disapproval on Thursday evening’s Larry King Live: “I read the other day, I think only four in 10 Americans believe in evolution. It’s still not a very bright country, Larry.” He later compared Sarah Palin to former American Idol contestant Sanjaya Malakar: “She’s like a reality show contestant who just lost, and they’re always like, you know, you haven’t heard the end of me. I’m not going. Yes, you are, Sanjaya. Good bye, bye-bye.”

Maher’s criticism of his fellow citizens came three minutes into the 9 pm Eastern hour CNN program. King had asked him about the president’s first weeks in office and the proposed economic stimulus package. Despite the Obama administration’s various problems, Maher defended the president as “learning” and that “he certainly is the smartest guy we’ve had there that I can remember.” He also stated that the tax cuts that are part of the proposal “really are not stimulus.” The host then asked Maher, “Do you think he’s [Obama] going to solve this economic problem?” The comedian replied, “Well, he can’t personally solve anything....I mean this is a mess like -- and I don’t think they’re telling us really how -- how bad it is. I think that’s why Geithner was so vague the other day when he presented his plan, because I think he just didn’t want to say it’s even worse, because I think there would be more of a panic than there is.”

Just one night after CEO Donald Trump told "Larry King Live" viewers that the U.S. is in a "Depression," Suze Orman, personal finance expert and host of her own show, started talking about people in bread lines - but she wasn't making a historical reference.

According to Orman there are people in bread lines right now, some of them white collar workers:

"There are some people who can't find a job, they're trying to do anything and everything in their power to get by. They've lost their home, lost their car. They don't have any money in retirement, they don't have a penny - and what are they doing?" Orman said on the Feb. 5 CNN broadcast.