Larry King interviewed pop singing sensation Lady Gaga on June 1, and she appeared conflicted over the presence of children in wombs. Near the beginning of the interview came this exchange...

King: At what age growing up, Gaga, did you know that you wanted to be a performer?

Gaga: In the womb, Larry, in my mother's warm womb.

King: [Laughing] At your birth.

Gaga: Yes, at my birth. I guess that you could say it's been my destiny to be a performer....

Getting technical, because that's what we pro-lifers do, Gaga did not originally say her personality, talents, and drive magically appeared "at birth," as King translated. She said they were present prenatally. See exchange beginning at 2:34 on this clip (WARNING: PG-13, visually)... 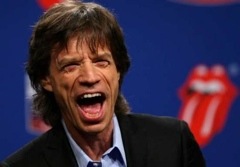 On Tuesday’s Larry King Live on CNN, a pre-recorded interview with Mick Jagger was shown in which the English musician talked about his decision to leave his home country in the 1970s to escape the 90 percent marginal tax rates of the time on high-income earners. After noting that he had made bad financial decisions in his earlier days of success, he recounted: "We had to leave England to acquire enough money to pay the taxes because in those days, in England, the high tax rate was 90 percent, so that's very hard. ... You made 100 pounds, they took 90. So it was very difficult to pay any debts back. So when we left the country, we would get more than the 10 pounds out of 100. You know, we might get 50 or something."

After King asked if he was "held in low regard in your mother country for leaving it," Jagger explained that, unlike in America, successful people are "resented" in most countries, including England:

On the April 22 Larry King Live on CNN, which was rebroadcast on Saturday, magician and comedian Penn Jillette – who is a self-described libertarian – challenged assertions by actress Rachael Harris that the Tea Party movement is motivated by "racism" against President Barack Obama. Jillette: "Well, that's the magic word. Once you say ‘racism,’ the other side loses automatically. And I don't think we have very much evidence that that's what it is. Don't they have to be doing racist things besides you just saying that they're racist?"

After Harris and Family Guy creator Seth MacFarlane joked for a moment that they had gotten together and created the movement, Jillette and Harris continued their debate over whether Tea Party members were motivated by racism: 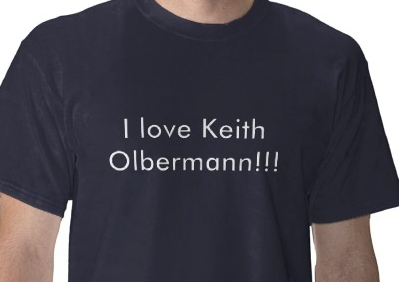 They say you can judge a man by the company he keeps.

During his interview with schlockumentarian Michael Moore, Larry's perilously liberal guest mentioned the name of the "Countdown" host.

On Tuesday’s Larry King Live on CNN, after guest Michael Moore joked about there being possibly 100 million Sarah Palin fans in America who "want to, you know, shoot moose from a helicopter or whatever else that they think that's cool that she does," King questioned whether there are really 100 million people who approve of moose hunting and then joked, "I think that there’s 100 million moose who’d like to shoot up to the helicopter."

Below is a transcript of relevant portions of the Tuesday, April 27, Larry King Live on CNN, with critical portions in bold:

Whatever your view on homosexuality might be as it pertains to Christianity, there's probably one place one wouldn't go to seek clarity on the issue - a Jewish TV host that's in his seventh marriage.

But it was Botsford, who had previously been somewhat critical of Knapp's decision to go public with her sexuality, that took the brunt of the questioning from King, a TV anchor not normally known for hardball questioning, unless it involves this issue (i.e., his interview with former Miss California Carrie Prejean).

Nothing is off-limits for Seth MacFarlane, the creator of Fox's "Family Guy" series, well almost anything. That's the message he wanted to convey in an appearance on CNN's April 22 "Larry King Live."

MacFarlane was asked about an episode, originally aired on Feb. 14, which showed one of the characters, Chris Griffith, out on a date with a female with Down Syndrome, which she said her dad was an accountant, and "my mom is the former governor of Alaska." Some said he stepped over the line, others thought it wasn't a big deal.

However, Palin reacted on the Feb. 16 broadcast of Fox News Channel's "The O'Reilly Factor" by asking why "Family Guy" would stoop to such a level.

"This world is full of cruel, cold-hearted people who would do such a thing," Palin said. "Look. I look at Trigg and he is going to face things as special needs children will be facing much more difficult than we ever will. So why make it tougher on the special needs community? When is enough enough? When are we going to be willing to say some things just aren't really funny?" 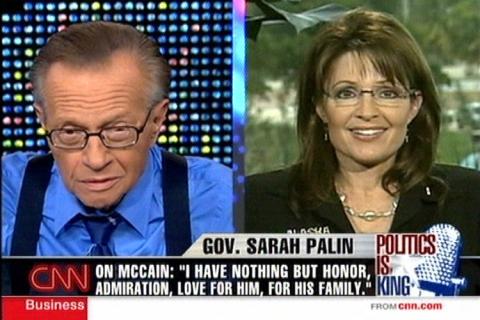 "We can't leave without asking you, my producers say I must ask you. Sarah Palin, what do you think?"

Without question, Silverman's comment was not as shocking as King's response (video follows with transcript, relevant section at 4:00, h/t Twitter's @Cubachi, file photo):

On Monday’s Larry King Live on CNN, guest Jane Fonda portrayed herself as a victim of a "myth" that was "created" by "right-wingers" about her infamous "Hanoi Jane" visit to Vietnam to protest the Vietnam War. Without specifying what aspect of the "Hanoi Jane" story she considered to be a fallacy, though the "Product Description" at Amazon.com seems to shed some light on what she was referring to, she claimed that author Jerry Lembcke’s new book, "Hanoi Jane: War, Sex, and Fantasies of Betrayal," dispels the "myth," and asserted that it is "sad" that some conservatives are "still stuck in the past":

JANE FONDA: No, it's about the myth, you know, why it is that 300 people went to North Vietnam, people, many people before me, why me, why have they created this myth? You know, when I came back from North Vietnam, there was maybe a quarter of an inch of media about it in the New York Times. Nobody made any big deal out of it. It was created, and some people are stuck-

FONDA: By right wingers. There are some people who are like stuck there, you know, they're still stuck in the past. I always want to say, "Get a life," or, you know, "Read what really happened," you know. The myths are now true.

Referring to people who sometimes protest against her, she continued: "But it makes me sad for these people who are stuck because they've not taken the time – if they're going to waste their energy on hatred, they should take the time in finding out what was really true."

The "Product Description" of the book at Amazon.com contends:

The "obesity epidemic" is the fault of poor individual choices and sedentary lifestyles, but in the news, blame typically falls on companies, rather than on the individual. CNN has attacked grocer stores, restaurants and food manufacturers for creating supposedly "addictive" products and in story after story called for more food regulations, taxes or other intervention.

CNN's hearty appetite for food control has gone on for years. They've waged a war on obesity all while promoting government meddling like higher taxes on drinks made with "cheap" corn syrup to fight the "obesity epidemic," health zoning prohibiting fast food restaurants from South L.A. and trans-fat bans just for starters. CNN even criticized supermarkets for wanting customers to buy products from them, back in 2006. 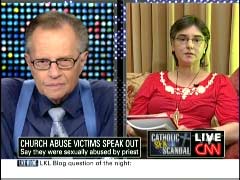 CNN's Larry King, moderating a panel discussing the Catholic Church sex abuse scandal on his program on Tuesday, tossed softballs at noted anti-Catholic Sinead O'Connor, who recently pushed for Catholics to stop attending Mass. By contrast, King hostilely interrogated former Miss California USA Carrie Prejean in November 2009, to the point where she almost walked out of the interview.

The CNN host spent the second half of his 9 pm Eastern  program to the Church scandal, bringing on Sinead O'Connor, two Catholic priests, the Catholic League's Bill Donahue, and former CNN anchor Thomas Roberts, a victim of sexual abuse by a Catholic priest when he was a teenager. After introducing his guests, King first turned to O'Connor and asked her about the previous segment, where he had interviewed two alleged victims of Father Lawrence Murphy, who was accused of molesting up to 200 deaf boys: "Did you hear the earlier guests talk about this, and what did you think about what they said?" Later, the anchor asked the Irish musician, "What do you think His Holiness [Pope Benedict XVI] should do?" 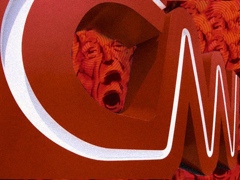 Even Joy Behar, HLN's pseudo-newscaster at the 9 pm slot, beat CNN's Larry King Live 21 times during the first quarter of 2010. King suffered the worst ratings of his CNN career.

Anderson Cooper, who used to rely on King's historically impressive viewership for a ratings boost of his own, dropped 42 percent of his viewers. All this despite his coverage of major news events this year such as the Haiti earthquake and the health care battle on the Hill.