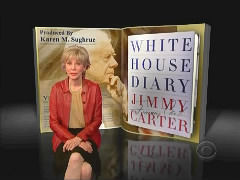 Jimmy Carter is out with his 26th book, so that means he is on his 26th round of slavish liberal-media interviews hailing him as a genius and a peacemaker. No wonder we’re so tired of him.

While the Bushes have remained dignified and largely silent as ex-presidents, Carter and Bill Clinton just cannot resist venomously attacking Republican presidents and conservative politicians, perhaps because whenever they do this, TV anchors bow and scrape before them and hail their “achievements” and compassion and generosity of spirit toward mankind. 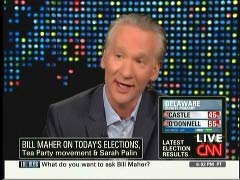 Appearing as a guest on Tuesday’s Larry King Live on CNN, comedian Bill Maher picked up on a recent contention by Newt Gingrich that President Obama is motivated by anti-colonialism which his Kenyan father felt as the Real Time with Bill Maher host smeared the potential 2012 Republican presidential field as racist:

How are they going to out-firebreathe each other? I mean, where this rhetoric has gone to at this point. It’s only 2010, and we’re having Newt Gingrich, as we were talking about before, calling him an anti-colonial Luo tribesman. ... That’s the new Kenyan, Larry. And Kenyan, of course, was code for n*****. But that’s where they are. They can’t say it out loud. But that’s where this whole campaign is going to be. You asked about racism. It’s all about racism. They cannot fathom this idea that there is a black President. And that’s what they are going to fight about.

Maher also declared that, while he personally likes Delaware GOP senatorial candidate Christine O’Donnell because she is a "nice person" who used to be a frequent guest on his Politically Incorrect show in the 1990s, that he was also cheering for her and other "tea baggers" to win GOP primaries, declaring that "she's going to get her Christian ass kicked in the general election."

And, as the topic turned to the Ground Zero mosque, while Maher acknowledged that there is a substantial amount of Islamic extremism in the world, he believed using the military against it makes it worse, and suggested that, because 9/11 mastermind Khalid Sheikh Mohammed has already been captured, America should declare victory and New Yorkers should "forget about it." Referring to the 9/11 mastermind, Maher declared:

Sykes Has No Remorse for 2009 Limbaugh Attack: 'He's Just a Big Bully'

It was a performance that even liberal bomb-thrower Keith Olbermann said was over the top immediately after the fact - the May 2009 White House Correspondents' Dinner, which Wanda Sykes took some harsh digs at conservative talk show host Rush Limbaugh.

However over a year later, the comedienne shows no remorse for her remarks about Limbaugh. She appeared on the Aug. 25 broadcast of CNN's "Larry King Live" and revisited the occasion, which she said she hoped Limbaugh's "kidneys failed" since he wanted President Barack Obama to fail, even though that part of her attack on Limbaugh was conspicuously missing from the CNN highlight reel.  Nonetheless, King asked her if she went too far, and Sykes said no.

KING: You think you went a little too far there?
SYKES: Not at all. Not at all.
KING: There's no connect here, right, between here and you, right?
SYKES: Probably not. It might be a little speed bump, you know, just a little one.

Russell Simmons on CNN: Christians Bombed the WTC in 1993?

By Matthew Balan | August 19, 2010 11:58 AM EDT
[Update; Thursday, 7:10 pm Eastern: Simmons admitted his error about the '93 World Trade Center bombing on his Twitter account: "Made critical error on CNN last nite. Was thinking of last major terrorist attack on US soil in OKC by McVeigh & mispoke"]

Russell Simmons, founder of the hip-hop label Def Jam, bizarrely and inaccurately claimed during an interview on Wednesday's Larry King Live on CNN that the perpetrators behind the first World Trade Center attack in 1993 were Christians: "If you're blaming Muslims for the attack on 9/11, then you need to change your mind. We didn't- did we blame Christians at the first World Trade attack? We didn't" [audio clip available here].

Host Larry King brought on Simmons to discuss the controversy over the New York City mosque near Ground Zero. He appeared immediately after an interview of New York Governor David Paterson, who attempted to negotiate with the planners behind the mosque in order to get its site moved. King first asked the entrepreneur to respond to the governor's efforts. He unequivocally supported the proposed worship space: "We should make every effort not to move it. I think it's critical that we recognize that we built this country on religious tolerance and on religious freedom. And so, if we want to penalize the two billion Muslims because of the actions of a few, then we have to examine the way we look at each other and all religions. So I think it would be a terrible idea to move the mosque."

You know the expression "Don't bring a knife to a gunfight?"

The subjects up for debate included the Obamas, Arizona's illegal immigration law, and racism.

To put it mildly, when the final bell had rung, there wasn't much left of Hill (videos and transcripts follow with limited commentary for what will be very obvious reasons): 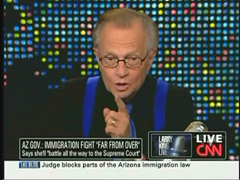 In the midst of a heated debate about allegations of racism within the movement, Giles asked, "Where is the Tea Party's outrage when members of their own party spit on members of the United States [Congress]?"

Loesch accurately replied, "That was proved false. Let's not engage in defamation and libel."

"Excuse me," barked Giles. "I'm talking so shut your mouth."

When Loesch told Giles, "Be honest when you speak and I wouldn't have to interrupt you," Giles again barked, "You know, Larry, can you just turn off her mike?" (video follows with transcript and commentary): 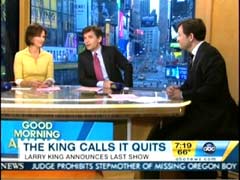 The morning programs of the Big Three networks all sang the praises of CNN host Larry King after he announced on Tuesday his upcoming retirement from his program, while overlooking his liberal bent at times. Both Willie Geist on NBC's Today show and CBS's Harry Smith labeled King "legendary," while ABC's George Stephanopoulos heralded how he was "on top of his game" for most of his career.

NBC correspondent Peter Alexander reused Geist's "legendary" label, and chronicled the CNN personality's "perch in prime time" during his 25 years on his Larry King Live program, spotlighting how he "has interviewed nearly 50,000 people over more than 50 years in broadcasting." Alexander underlined this with clips from King's interviews of Frank Sinatra, Ross Perot, and Paris Hilton, noting that "if you wanted the country to listen, you sat down with Larry King."  The correspondent also included a clip from Ken Baker of E! News, who stated that "whoever is going to replace Larry King has obviously very big shoes to fill."

First it was long-time anchor Lou Dobbs, who retired last fall from CNN. Now another fixture of the network will soon be playing another role in the cable news universe.

On CNN's June 29 "Larry King Live," host Larry King, who had never been terribly friendly with conservative guests, announced his decision he would be giving up his show this fall.

"Before I start the show tonight, I want to share some personal news with you," King said. "Twenty-five years ago, I sat across this table from New York Gov. Mario Cuomo for the first broadcast ever of ‘Larry King Live.' And now, decades later, I talked to the guys here at CNN and I told them I'd like to end ‘Larry King Live,' the nightly show that -- this fall and CNN has graciously accepted to agree to, giving me more time for my wife and I to get to the kids' little league games."

Larry King To Be Replaced By 'Britain's Got Talent' Judge? 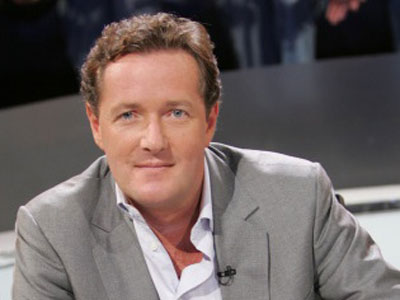 UPDATE AT END OF POST: Morgan is the former British tabloid editor that mocked George W. Bush for falling off a Segway only to break three ribs years later driving one himself!

A number of reports claim CNN's longtime host Larry King is about to be replaced by Piers Morgan, one of the judges on "Britain's Got Talent" and its U.S. version "America's Got Talent."

According to London's The Daily Telegraph, "The Britain's Got Talent judge and former newspaper editor is on the verge of signing a four-year contract to take over King's primetime show in the autumn."

"King, 76, has reigned over American television for decades, with the Larry King Show first airing in 1985. However, his ratings for the first three months of this year fell to an all-time low of just 771,000 viewers, down 43 per cent in the last year."

Yet other reports say Morgan could be replacing Campbell Brown. Here's the New York Post's take: 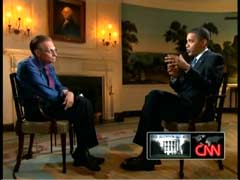 CNN's Larry King completely left out the major topic of the White House's continuing obfuscation on the Sestak and Romanoff controversies and barely mentioned the economy during his interview of President Obama on Thursday. While King did ask extensively on the Gulf oil leak and touched on the Middle East and immigration, he also tossed softballs on LeBron James and the President singing with Paul McCartney.

The CNN host aired his interview with the chief executive during the first half of the 9 pm Eastern hour. King spent the entire first two segments asking about the oil leak issue. Other than one question, where he asked whether the President had any responsibility for the disaster, the journalist asked softball questions (remember, CNN claimed just under two months ago in April that it was the only "non-partisan" cable network, and how King hounded Carrie Prejean during an interview in November 2009):