Jon Stewart, host of Comedy Central’s The Daily Show, used his February 27 appearance on Larry King Live to take some political jabs at the Bush administration. Stewart launched several attacks against the Bush White House, including his charge that the administration has "shown no real credibility."

Jon Stewart: "...My mind has been blown just so consistently by this administration’s insistence on their own competence without ever, sort of, delivering, kind of, any sort of evidence to that...They say trust us, everything’s fine. Yet, they’ve shown no real credibility."

In response to a question on the public’s reaction over the controversial deal between the U.S. and a United Arab Emirates-owned company to manage six American ports, Stewart went on the attack again:

Stewart: "I keep wondering what it takes to get fired from this administration. It seems like, literally, the worse you do, the bigger the medal you get."

The rest of Stewart’s liberal talking points are behind the cut. 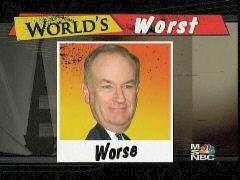 On his Countdown show Thursday, MSNBC's Keith Olbermann attacked FNC host Bill O'Reilly for comments O'Reilly made on The O'Reilly Factor during a January 31 discussion of CNN correspondent Christiane Amanpour's recent declaration, previously reported by NewsBusters (with video), that the Iraq War has been a "disaster." Presumably inspired once again by his frequent source, the far-left Media Matters for A

CNN’s Amanpour: "The War in Iraq Has Basically Turned Out to Be a Disaster"

“The war in Iraq has basically turned out to be a disaster,” Christiane Amanpour, CNN’s chief international correspondent, declared from London live on Monday’s Larry King Live. In the segment in which journalists discussed the serious injury from a bomb in Iraq to ABC anchor Bob Woodruff and cameraman Doug Vogt, she lamented how “journalists have paid for it, paid for the privilege of witnessing and reporting that.” She added: “For some reason which I can't fathom, the kind of awful thing that's going on there now on a daily basis has almost become humdrum. So when something happens to people that we identify, like Bob and like Doug, we wake up again and realize, no, this is not acceptable, what's going on there. And it's a terrible situation." King replied: “Well said.” Later, in a segment on kidnaped journalist Jill Carroll, Amanpour asserted that “by any indicator Iraq is a black hole” and a “spiraling security disaster.” A DrudgeReport.com posting alerted me to Amanpour’s remarks. (Transcript follows.)

Frey's Lies: What Did Oprah Know and When Did She Know It?

A New York Times report today (HT Lucianne) by Edward Wyatt is shredding Oprah Winfrey's defenses relating to what has turned out to be a largely false book (third item at link), namely James Frey's "A Million Little Pieces."

Every day, somebody at CNN picks a couple of video segments for their “Best of TV” section on their video page. From what I can tell, they can come from any of the various news categories CNN reports on such as world, business, politics, sports, health, etc. Of all the segments that they air during a given day and reproduce for their video page, typically only a couple are chosen for the “Best of TV” section.

On Friday, one of the three videos that made CNN’s “Best of TV” list was a 53 second clip of Sen. Barbara Boxer (D-California) making a variety of accusations directed at the Bush administration on “Larry King Live.” In her rant, Boxer blamed Bush for the entire Plamegate affair, while claiming that the intent was “to punish a man's family because he told the truth about weapons of mass destruction.”

What follows is a full transcript of what CNN felt was the “Best of TV” last Friday, along with a video link.

On CNN’s “Larry King Live” last night, retired CBS News anchorman Walter Cronkite said Americans are ignorant, and that the majority of the population isn’t smart enough to make the proper decisions at election time to vote for president.

In a tirade about America not paying its teachers enough, Cronkite said:

“We're an ignorant nation right now. We're not really capable I do not think the majority of our people of making the decisions that have to be made at election time and particularly in the selection of their legislatures and their Congress and the presidency of course.”

What follows is a full transcript of this encounter, and a video link.

Our friend at Bare Knuckle Politics has found a fabulous video for us.

Bob Costas Is My Hero

By Rick Moore | August 20, 2005 2:16 PM EDT
Bob Costas made news today for not hosting a show and immediately became my hero:

While some cable TV hosts are making their living off the Natalee Holloway case this summer, Bob Costas is having none of it.

Costas, hired by CNN as an occasional fill-in on "Larry King Live," refused to anchor Thursday's show because it was primarily about the Alabama teenager who went missing in Aruba. Chris Pixley filled in at the last minute.