Larry King Gets One More Laugh Over Carrie Prejean Interview

Larry King wanted the last laugh from his testy interview with former Miss California Carrie Prejean, and got it Sunday in an interview with CNN's Howard Kurtz. Kurtz hosted King Sunday on "Reliable Sources" to showcase memorable interviews from 25 years of "Larry King Live."

One of the interviews was King's clash with Carrie Prejean from November, 2009. As NewsBusters then reported, King pressed Prejean about reports of a sex video she made as a teenager for her boyfriend. In addition, he repeatedly asked her about a settlement she made with the Miss Universe organization even though she kept asserting the matter was confidential.

Prejean then told King he was being "inappropriate." She removed her mic when a caller claiming to be gay pressed her about same-sex marriage. Supposedly the agreement between Prejean's publicist and King included no phone calls during the interview, although King denied having knowledge of that at the time of the interview.

Larry King to Streisand: Why Do 'Right-Winger Radio Hosts' Pick on You?

CNN's Larry King displayed his liberal slant during an interview of left-wing celebrity Barbara Streisand on his program on Wednesday, his penultimate episode before retirement. King wondered why she was "singled out more than most...the right winger radio hosts will often refer to Barbra Streisand." The host also sought the celebrity's take on "this deal to permit the tax decreases for the wealthy."

King devoted the entire 9 pm Eastern hour to his interview of the Brooklyn native. At the bottom of the hour, as the two discussed her political activism for the left, the CNN host raised how many on the opposite side of the political spectrum do not hold her in high regard, and focused his attention on conservative talk radio:

[Video embedded below the page break]

While we have a compendium of his bias, the veteran talk show host is equally known for some pretty tremendous gaffes.

According to TVByTheNumbers.com, the self-proclaimed most trusted name in news's prime time ratings this year are the lowest since at least 1997:

CNN's Larry King provided more proof that his network does indeed "play favorites," contrary to the claim of their recent ad, by bringing on three liberals on his program on Monday to discuss WikiLeaks' latest document release. Daniel Ellsberg of the Pentagon Papers infamy praised Julian Assange as a "truth-teller," while Michael Hastings of Rolling Stone defended the website.

Former Clinton administration official James Rubin joined Ellsberg and Hastings for a panel discussion during the first half hour of King's 9 pm Eastern hour program. The outgoing host turned to Ellsberg first and asked as his second question, "Knowing how you release things, what should not be reported?"

The Vietnam-era hero of the left referenced a more recent cause celebre of his ideological peers in his answer and mouthed their talking point on it:

King had Mr. Biden on as his sole guest during the first half hour of his program, and brought on Second Lady Jill Biden to join her husband for the remainder of the program. The host raised the controversial issue immediately before Mrs. Biden came on, and besides noting how "most of the administration" is against the policy, he stated that "apparently, they polled troops- they're against it, and you poll America- they're against it."

On October 29, 2010, The Washington Post cited unnamed "multiple people familiar with the findings" of a Defense Department survey of active-duty and reserve military, which apparently found that "a majority of active-duty and reserve service members...would not object to serving and living alongside openly gay troops," but the actual results would not be available until December 1, when a "Pentagon report...regarding how the military would end enforcement of the "don't ask, don't tell" law" is released. However, only two years ago, The Military Times, in their annual poll of active-duty service members, revealed that 58% were opposed to the repeal of "don't ask, don't tell." Moreover, General James Conway, who stepped down as commandant of the Marine Corps on October 22 of this year, stated in an October 15 interview that "as many as 95% of Marines would be uncomfortable serving alongside openly gay troops."

Michael Moore: ‘Good Thing for Dems’ That Conservative Dems ‘Thrown Out of Office’

Appearing as a guest on Friday’s Larry King Live on CNN, liberal filmmaker Michael Moore claimed that a "silver lining" for the Democratic Party in their election losses is that conservative Democrats were "thrown out of office last week," as he complained that liberal Democrats had to "placate these conservative Democrats and they watered down these bills." Missing the reality that so many centrist Democrats lost because they represented conservative-leaning congressional districts where their popularity was dragged down by their liberal leadership, Moore bragged that only three members of the Progressive Caucus in the House lost seats.

Later in the show, he advised President Obama to go left: "I hope that, the lesson to learn is to see the more liberal you were if you were a member of Congress in last week’s election, the more likely it was that you got reelected. The conservative Democrats, the majority of them were booted out. The liberals won. He should take this country in the progressive direction that he was elected to take it in."

11/12: UPDATE with CNN reaction below the fold

CNN has launched a new advertising campaign, claiming to be the only cable network without an ideological ax to grind. “If you want to keep them all honest, without playing favorites, the choice is clear: CNN, the worldwide leader in news,” the on-screen message argues.

So, did CNN “play favorites” during the midterm campaign? MRC analysts reviewed all of the guests and commentators on CNN’s primetime weekday programs from October 4 through October 29, the last four full weeks before the November 2 elections. Guests were grouped into three categories: “Democrat/liberal,” “Republican/conservative,” and “Other.” The latter category included all non-political guests, as well as guests who were not associated with a clear political point of view.

Results and chart below the fold:

On Wednesday's Larry King Live on CNN, liberal comedian Jon Stewart bashed Fox News, labeling their "fair and balanced" slogan a "complete lie." Stewart also stated that he thought the network was "wrong" and that "they've built... [a] really effective political organization," not a news organization. The comedian also lamented how Democrats have "faced a relentless campaign of hyperbole that they are tyrannical socialists" [audio available here].

Stewart appeared for the entire hour on King's program. Forty minutes in, the CNN host asked his guest, "What do you make of Fox?" The comedian, who earlier promoted his upcoming supposedly moderate "Rally to Restore Sanity," initially gave a mostly complimentary reply, though included his "wrong" label of the network, but continued with some criticism on CNN:

Are religious leaders, conservative activists, and Jim DeMint responsible for the deaths of gay teenagers? That's the impression left by Kathy Griffin, Wanda Sykes, and Lance Bass, in an extensive interview on the October 4 "Larry King Live."

Focusing on the slew of gay teens who have committed suicide in the past week as a result of bullying, the panel of gay rights activists spewed offensive bile toward preachers of traditional social values.

"The blood is on their hands," decried Griffin, referring to the bullies who abused the gay teenagers, and religious leaders and political figures who oppose gay marriage and the repeal of the military's Don't Ask, Don't Tell policy.

Earlier in the show, Griffin implored viewers to see her ludicrous connection between conservative social policy and gay teen suicide:

Kathleen Parker: I'm 'Slightly to the Right of Center;' Fan of Obama

On Thursday's Larry King Live, future anchor Kathleen Parker verified her tenuous conservative credentials, as she identified herself as a "conservative," but added, "a pox on everybody's house, as far as I'm concerned." She later confessed that she "would put myself...slightly to the right of center," and that she was "a big fan of Barack Obama as he came into office...I didn't want him to fail."

Anchor Larry King brought on Parker and future co-host Eliot Spitzer of "Client Number Nine" fame during the first half of the 9 pm Eastern hour. Three minutes in, King asked about the format of the show, which begins on October 4. After the two briefly described it, the columnist stated that "Eliot is identified as a Democrat and I'm identified as a conservative." Spitzer replied, "Well, you said Democrat/conservative, not Republican," and the resulting exchange led to Parker revealing how she saw her position politically. 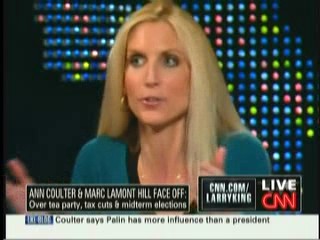 Ann Coulter on Monday explained to Larry King why so many Americans think Barack Obama is a Muslim.

Appearing on CNN's "Larry King Live" with Professor Marc Lamont Hill, Coulter pointed out how odd it is that this number has increased since Obama was elected, "Usually the truth moves in the opposite direction."

She continued, "The answer is because he seems foreign to them, that he's pushing this European health care system on America, that he doesn't listen to the American people, that he doesn't cite God when he mentions the Declaration of Independence. He seems alien, and I keep telling them, 'No, he's not a Muslim, he's an atheist.'"

This led King to ask, "Do you need to believe in God to govern?" And that's when the fun started (video follows with transcript and commentary):