Two tech companies have allegedly declined to testify at a hearing held by Senator Josh Hawley (R-MO) about their dealings on China. The hearing, held by the Senate Subcommittee on Crime and Terrorism, will focus on “How Corporations and Big Tech Leave Our Data Exposed to Criminals, China, and Other Bad Actors.”

Lefty groupthink can prove harmful to your credibility. That's what happened to CBS and other lemmings who took up tennis star Serena Williams' cause of "sexism" in tennis after her loss to Naomi Osaka of Japan in the Sept. 8th championship match of the U.S. Open women's tennis tournament. The New York Times has since reported that men are punished (see photo of unnamed male tennis pro abusing umpire) by tennis officials three times as often as women, deflating charges of sexism by Williams and her compliant media.

Vox Schlock: Science Writer Falsely Claims Sunday Was 'Longest Night in the History of the Earth'

Amazon founder and current Washington Post owner Jeff Bezos must be quite relieved that he passed on investing millions in Ezra Klein's pet project.

Klein, the infamous founder and coordinator of the left-driven news-managing and manipulation effort known as JournoList, wanted the Post to invest $10 million in what the New York Times described early this year as "a new website dedicated to explanatory journalism on a wide range of topics beyond political policy." Klein, after instead finding a home at leftist online empire Vox Media, started up Vox.com, which has become an ongoing embarrassment of epic proportions. What follows is the latest example, tweeted by the founder himself (HT Twitchy):

As conservatives, we know what happens every time we criticize the policies of the liberal occupant of the White House: We're instantly branded as “racist” and “intolerant” while our views are quickly and summarily dismissed.

However, Kevin Drum, a political blogger for the liberal Mother Jones website, has received similar treatment as he learned that no matter which side of an issue he supports, his mailbox on the Twitter social media website quickly fills up with emails from people taking the opposite view.

Earlier today (at NewsBusters; at BizzyBlog), I noted how the Associated Press's Steve Peoples and Politico's Juana Summers could only find hundreds of people attending GOP vice-presidential pick Paul Ryan's Wednesday appearance at Oxford, Ohio's Miami University. Perhaps even more troubling is how they somehow chose an odd angle for their coverage, namely that Ryan has supposedly avoiding talking about Medicare in his stump speeches -- and both wrote "that changed" in describing its first mention.

It seems more than a little odd that two establishment press reporters from supposedly separate and independent media outlets both apparently focused for four days on when Ryan would mention the word "Medicare" on the campaign trail. Summers even made it her headline, while Peoples seemed to want to convey the impression that Ryan has been afraid to mention the word:

In a September 15 post-primary item at the Atlantic ("An Epic End to the Primaries: What It Means"), politics editor Marc Ambinder presented seven "different ways to look at the primaries of September 14, 2010."

His final item reads as follows (bold is mine):

The bolded text is an obvious point to anyone with even the most rudimentary powers of observation, but it's a pretty interesting admission nonetheless. That's especially true because Ambinder is a bona fide member of the media. Indeed, he's a self-admitted Journolist member who despite (or perhaps because) of that involvement has a specific assignment involving covering this fall's elections.

Roger Simon's Wednesday morning column ("Journolist veers out of bounds"), an item Rush brought up on his show this afternoon, may be one of the most delusional items ever written by a journalist attempting to defend his profession.

Rich Noyes at NewsBusters covered one aspect of Simon's column on Wednesday, namely the deliciously hypocritical outrage of NBC/MSNBC reporter Chuck Todd over how the Journolist scandal "has been keeping him up nights, and he's especially frustrated that 'the right' would use it as 'a sledgehammer' against everyday journalists, 'those of us who don't practice advocacy journalism.'"

I'll suggest that Simon's rendition of journalistic history is at least as offensive as Todd's reaction, in that it's laughably and obviously false on so many fronts (numbered tags are mine):

The Daily Caller released a new JournoList scoop today, and this one's a doozy. It confirms that reporters on the liberal media listserv did in fact collaborate with political operatives and campaign officials to spin media coverage in favor of Barack Obama.

The latest piece further debunks JournoList founder Ezra Klein's claims - also taken on by this humble blogger - that the email list did not include campaign or government officials, and was not used to manufacture talking points.

And talking points were a much-discussed issue. "JournoList’s greatest challenge is to make sure an actual win by Obama translates into winning the battle for political impact," Houser stated on one occasion. It doesn't get more explicit than that.

The JournoList scandal is getting worse every day and The Washington Post is at the center of it. Blogger Ezra Klein ran the operation and at least three other staffers were members. (Blogger Greg Sargent claims he wasn't a member after he joined the Post.) In addition, at least one member of Slate and two from Newsweek, also owned by Washingtonpost.Newsweek Interactive, were members.

The almost constant revelations of political activism and journalistic conspiracy raise an enormous number of questions about Post policies, professionalism and ethics. As a conservative, and therefore a member of the movement JournoListers sought to demonize, I feel Post readers are owed full disclosure.

Any understanding of the Society of Professional Journalists Code of Ethics makes clear this list and the Post's involvement violate a number of ethical guidelines. In fact, much of the code seems to have been ignored. Here are just a few examples from the code.

Does He Know Where He Works? MSNBC's Chuck Todd Upset 'Right' Would Confuse Professional Journalists with Activists 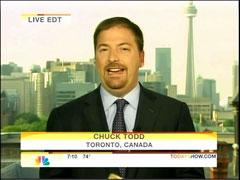 NBC News White House correspondent and MSNBC daytime anchor Chuck Todd told Politico's Roger Simon that the Journolist scandal has been keeping him up nights, and he's especially frustrated that "the right" would use it as "a sledgehammer" against everyday journalists, "those of us who don't practice advocacy journalism."

Todd fretted: "Journolist was pretty offensive. Those of us who are mainstream journalists got mixed in with journalists with an agenda. Those folks who thought they were improving journalism are destroying the credibility of journalism. This has kept me up nights. I try to be fair. It’s very depressing."

The only problem, of course, is that Todd and other ostensibly neutral reporters at NBC have gotten "mixed in with journalists with an agenda" via the entire MSNBC project. Keith Olbermann, Rachel Maddow, the upcoming Larry O'Donnell show -- these are not programs designed to boost the "credibility of journalism." They are liberal agenda shows designed to push one side -- Journolist on TV, as it were.

For his part, Simon seems critical of Journolist for tainting the media's professionalism -- a "holy calling" (although the most directly critical statement is the headline, "Journolist veers out of bounds"). An excerpt:

Tucker Carlson's website The Daily Caller has unearthed a treasure trove of liberal journalists talking (nastily) to themselves in a private e-mail list about how they should use their media power to remake the world in their image.

The funniest thing about this expose of “JournoList” was witnessing journalists say it was unfair to leak these e-mails when reporters had an “expectation of privacy.” More than 90,000 pages of secret documents on Afghanistan have been leaked and journalists are tripping over each other in a mad stampede to cover the story. Everyone should laugh heartily at leak-devouring journalists getting a fistful of their own bitter pills.

The saddest thing about all this is the confirmation (as if it were necessary) that liberal journalists really aren't journalists first. They're political strategists. They pretend to be the Hollywood version of Woodward and Bernstein, the brave sleuths digging out government malfeasance and corruption. But in reality they're the Woodward and Bernstein who plotted how to get Richard Nixon impeached and ready the way for pacifist and socialist “Watergate babies” like Chris Dodd and Henry Waxman to take seats of power. Ethics are only relevant if they’re a weapon.