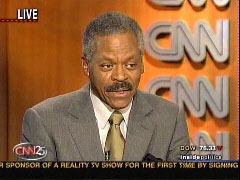 During an August 6 interview, posted online, with Television Week, former CNN anchor Bernard Shaw blamed racism for the debate over whether illegal immigrants should be in the country as he referred to "some people who still believe that people

Don't miss my latest writing for the Free Market Project: Media claims about a “housing bubble” are nothing new. Since before the 9/11 terror attacks, the media have been calling the housing market a “bubble” while predicting an imminent, devastating decline. Not only have they been wrong in forecasting such a top, they have thoroughly mischaracterized what an investment bubble is. Now that the market for homes has finally slowed a bit, the media are declaring the bubble has burst.

Nets Appear to Ban Conservative Guests From Their Panels This Morning

It’s probably not the first time it has happened, but with the exception of ABC’s George Will – who, of course, has been a regular on that network’s “This Week” for many years – the networks’ Sunday political talk shows had no established conservative guests to participate in their weekly panel discussions. Joining George Stephanopoulos and George Will this morning were Democratic political strategist Donna Brazile, TIME magazine’s Jay Carney, and ABC’s Claire Shipman. NBC’s “The Chris Matthews Show” featured Katy Kay of the BBC, Michael Duffy of TIME magazine, Norah O’Donnell of MSNBC, and Terry Neal of the Washington Post. CBS’s “Face the Nation” did its annual Thanksgiving “historians” program.

The most left-leaning of the panels was on NBC’s “Meet the Press” where Tim Russert invited Judy Woodruff, formerly of CNN’s “Inside Politics,” David Broder of the Washington Post, Eugene Robinson also of the Washington Post, and David Gregory of NBC News. While the “This Week” and “Matthews” panels actually engaged in a comparatively well-rounded discussion, the “Meet the Press” group spent the bulk of its half-hour talking about the “disaster” in Iraq. For instance, Robinson said, “I think that there's general agreement now that there will be a mess in Iraq when U.S. troops finally withdraw and it certainly won't be an Athenian democracy, as the administration said it was out to create.” Gregory agreed, “And unfortunately, perhaps the only outcome is a kind of low-level civil war that's akin to the Arab- Israeli situation with U.S. soldiers in the way.”

Woodruff then joined in by paraphrasing a recent article in the Atlantic Monthly:

At about 4:49pm EDT today on CNN's Inside Politics, when Bob Novak maintained that Katherine Harris could win a Florida Senate race because she's anti-establishment and candidates the establishment hates have won before, James Carville charged that Novak made that argument because he has “got to show these right wingers that he's got backbone. The Wall Street Journal editorial page is watching, show them you're tough.” Novak fired back: “I think that's bullshit and I hate that." Novak then pushed his chair back, got up and removed his microphone as he walked off the set. Transcript follows. Real and Windows Media video also available.

By Ken Shepherd | July 18, 2005 5:41 PM EDT
In my last post, I relayed how Inside Politics (IP) had not picked up on a new poll showing decreasing support for Osama bin Laden in the Arab world and a concurrent increase of belief in democratic reform. Well, IP again ignored that story today, fixating again on a Karl Rove angle to the Valerie Plame leak investigation. Senior political analyst Bill Schneider, however, did have time to rattle off negative poll results for President Bush hot off the presses from the Washington Post dealing with, you guessed it, the Karl Rove story. Of the 11 segments aired on IP, only 3 had nothing to do with Rove: a Bruce Morton piece on state dinners under President Bush versus other recent presidents; the "political bytes" segment about 2008 hopefuls campaigning at the National Governor's Association meeting in Des Moines, Iowa, over the weekend; and "blog reporter" Jacki Schechner on a blogger who was fired after her boss read her blog. [click title bar for full post]

By Ken Shepherd | July 12, 2005 5:26 PM EDT
A quick by the numbers look at Rove coverage on Inside Politics today: Out of 14 segments on IP, nine were devoted to the Karl Rove/CIA leak story:

No pressing Leahy on his liberal litmus test

By Ken Shepherd | July 12, 2005 2:36 PM EDT
Yesterday on CNN's Inside Politics, host du jour Candy Crowley essentially got Senator Patrick Leahy (D-VT) to confess his litmus test on abortion for Supreme Court nominees, but didn't press him on the matter, despite her colleague Bill Schneider last week asserting that only conservatives, not liberals, have a litmus test stance on abortion.