CNN’s Blitzer to Huffington: ‘I Read Your Blog on HuffPost All the Time’

Wolf Blitzer, on Friday’s "The Situation Room," conducted a softball interview of Arianna Huffington, helping her to promote her new book, "Right is Wrong: How the Lunatic Fringe Hijacked America, Shredded the Constitution, and Made Us All Less Safe," and asking her for her take on the three presidential candidates. He failed to identify her "Huffington Post" website, "one of the most popular websites," as he put it, as a liberal stomping ground, and basically sucked up to her during the entire segment. "I read ‘Huffington Post.’ I read your blog on Huffington Post all the time." Also, "You've really created an enormous success with HuffingtonPost.com, in part because everyone there seems to be blunt, honest. They don't hedge."

Blitzer’s gentle treatment of Huffington could be put into the context of what happened two days later. The Fishbowl DC blog exposed that on Sunday night, Blitzer himself appeared at Huffington’s "Right Is Wrong" book release party, which major Democratic contributor Beth Dozoretz held at her home [see picture above, via Fishbowl DC].

What else do you call it when a lib blogger compares the radio talk show host to agitators of Rwandan genocide? From Jeffrey Feldman's May 7 blog over at Huffington Post (emphasis mine; h/t NRO's Kathryn Jean Lopez):

The right-wing pundit's 'orders' to his Republican listeners have been clear: vote in the Democratic primaries as a coordinated tactic for sewing [sic] division in the opposition party. The goal of such 'chaos,' Limbaugh has stated explicitly, is to foment hatred between different parts of the Democratic Party leading, ultimately, to street riots during the Denver convention.

Huffington Cheap Shot: 'John McCain Should Not Be Allowed to Hold Sharp Scissors'

Shortly after reporting on her Web site that GOP presidential hopeful Sen. John McCain did not vote for George W. Bush in 2000, Arianna Huffington continued to denigrate the presumptive Republican nominee before a Washington, D.C., audience.

"Actually, you know what I think - the more I think of it, John McCain should not be allowed to hold sharp scissors," Huffington said. "[Y]ou know he wants to make the tax cuts permanent. He wants bigger corporate tax cuts. You know, it's an endless process. You know it's basically, exactly what this country does not need. It's expanding and deepening the last eight years."

Earlier, Huffington had charged that the media are playing "Pontius Pilate" when dealing with the issue of global warming.

On the heels of accusations that the media exploited the death of 2006 Kentucky Derby winner Barbaro, now there are cries that NBC didn't spend enough time on Eight Belles' death. After her second-place finish in Saturday's Derby, the three-year-old filly snapped both ankles and was euthanized by a vet on the track.

Ruth Hochberger is one of the voices criticizing NBC for their “abysmal” coverage, but her May 4 Huffington Post article misrepresented the broadcast, claiming there was a “complete failure to tell the story.” She scolded NBC because, “Its nearly three hours of coverage of yesterday's Kentucky Derby just about completely ignored the news. “

Since Eight Belles' death was near the end of the “nearly three hours of coverage,” why is Hochberger penalizing NBC for not having a time machine and ignoring it earlier?

It didn't satisfy Hochberger that NBC refused to speculate and reported only when they knew the facts. She seemed to want the wall-to-wall guesswork reporting one finds with the “baby stuck in a well” crisis journalism where a network trains the camera on “breaking news” and continuously chatters about what might be happening, regardless of how much they know (all bold mine):

Look next to the definition of "Clinton loyalist" in the dictionary, and you're likely to find a photo of Lanny Davis. The man who would have put Baghdad Bob to shame for his unflinching flackery during Bill's Monica mess is back on the beat for Hillary. Yesterday, Davis wrote a HuffPo column purporting to set forth 10 Undisputed Facts showing Obama's weakness as a general election candidate against John Mccain. As Jake Tapper has observed, some of those "facts" are "both disputed and not facts," including the risible notion that Hillary didn't run any negative ads. Guess the commercial featuring Osama Bin Laden slipped Lanny's mind.

Davis was back at it on today's Morning Joe. After repeating his claim from the HuffPo column that Obama is in a dead heat with McCain in super-blue in Massachusetts while Hillary's up by 15%, Davis took his anti-Obama argument a giant step further. Davis claimed that Barack is on track to lose in a blow-out of epic, McGovernesque, proportions.

Pot and Kettle: Huff-Po Asks Dan Rather If Bushies Are Dishonest

Rachel Sklar of The Huffington Post interviewed Dan Rather, which is not a real surprise, since she’s been supportive of his vengeful lawsuit against CBS News (and his partner in fraud Mary Mapes is a Huff-Poster). But why would she ask Rather to decry the dishonesty of the Bush administration, considering his own wallowing in falsehoods? Does the Huffington Post need to share Rather’s apparent delusion that the phony documents are real until he can be convinced otherwise? In Part II of her interview, after Rather denounced how bad economic news snuck up on us because "we were lied to and people dealt in sophistry at best and misled by big people in positions of power," the honesty question followed.

SKLAR: You mentioned people in positions of power not being forthright, or lying outright. There are so many echoes in that elsewhere, especially with respect to the Iraq war, obviously. Do you see this as a pattern of how this administration has operated?

Arianna Huffington started The Huffington Post with a read-my-lips-with-an-accent pledge: it would be an oasis of brainy progressivism, not a slash-and-burn hate site. That's a tough promise to live up to when you invite Hollywood mudslingers like Alec Baldwin and Bill Maher to the table. But even the women sling mud. Screenwriter Nora Ephron is starting out the week singling out white men as vile and ignorant boobs who shouldn't be allowed to pick the next president:

In today's episode of "As The Left Eat Their Own," a tape of Hillary Clinton complaining after Super Tuesday that activists from MoveOn.org "flood into these caucuses and dominate them and really intimidate people who actually show up to support [her]" was published at The Huffington Post Friday.

This has set off a predictably hostile reaction from the liberal blogosphere, and was considered such a bombshell that Barack Obama-loving MSNBC actually began Friday's installment of "Verdict" with this revelation.

But, before we get there, here's the text of Hillary's remarks (audio embedded upper-right):

Liberals get a bit wiggy when it comes to electoral shenanigans in Ohio. On The Huffington Post, Ari Melber accuses Rush Limbaugh of encouraging Republicans to commit a felony by crossover voting for Hillary Clinton. Those "lying voters" are under investigation, although prosecutions are "considered unlikely," he reports:

Remember Chris Kelly, the mudslinger at the Huffington Post who mocked Ann Coulter's father as a Nazi right after he died? On Monday, Kelly took up mocking Pope Benedict as a Nazi in attacking Bill O'Reilly, and by extension, every Catholic who attended an Easter Mass, as a way to deflect criticism of Barack Obama's poor taste in ministers:

It's hard to top the absurdity of the media hyping global warming presented in the NewsBusters story posted yesterday by Noel Sheppard about how the classic science fiction movie, "The Day the Earth Stood Still," is being remade where Klaatu comes to earth to warn us about global warming. 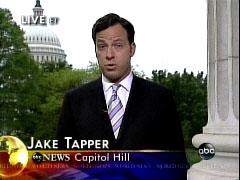 Freshly squeezed into his Political Punch blog this morning, ABC's Jake Tapper (pictured in NB file photo at right) calls the Clinton camp for denying that they are milking the Obama/Wright controversy when, in fact, they are: