Bozell Column: A Guide to the Movie Galaxy

In the groves of academe, studying popular culture is often the preserve of nutty left-wing professors performing exotic Marxist autopsies on the imperialist dynamics of Donald Duck comic books. 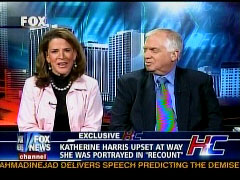 In an appearance on Monday's Hannity and Colmes on FNC, former Florida Secretary of State Katherine Harris responded to the HBO movie Recount, about the 2000 Florida recount of the presidential election, as she charged that the movie ignored Harris's early attempt to implement a statewide recount in Florida, a move which was fought by the Al Gore campaign.

Bozell Column: Sex and the Skittish

That sleazy yet hallowed HBO television series "Sex and the City" is now in theaters as a feature film, and the cultural elites are having a religious experience. Newsweek previewed the movie by reporting how an estimated 50,000 people, some from far-away lands like Australia and Japan, "make the pilgrimage each year to the shrine," the fictional New York City home of "Sex" protagonist Carrie Bradshaw. The magazine chronicled a tour group standing silently, some weeping.

Am I the only one who thinks that those estimated 50,000 people out there make the Trekkies look sane by comparison? But Newsweek seems to lament how the movie isn’t outrageous enough. The headline is "Girls Gone Mild," and the trailer is all about our protagonist getting married – maybe. Writer Julia Baird was amazed at "how many people speak of it in hyperbolic terms: as a revolution, a phenomenon, a cataclysm, almost an insurgency."

HBO's 'Recount' movie which premiered Sunday night, and will re-run on Monday evening, certainly lived up to the admission of actor Kevin Spacey, who played Gore operative Ron Klain, that it presented the 2000 Florida election aftermath through the eyes of the “underdog” Democrats fighting to “count every vote” despite being frustrated by Republican Secretary of State Katherine Harris who was portrayed as an easily-manipulated dolt. But Tom Wilkinson as James Baker came off as an in-command strategist and the movie delivered some anti-Democratic points rarely heard in the news media:

First, Bob Balaban, as Bush-Cheney lawyer Ben Ginsberg, reacting to Gore-Lieberman campaign Chairman Bill Daley whose father was Mayor of Chicago in 1960: “His daddy stole it for JFK and now he's going to steal it for Gore.” Second, from Wilkinson as James Baker: “Who knows how many votes we lost when the networks called Florida for Gore before all the polls were closed on election night.”

UPDATE: Weird, but close to reality. In 'Down and Dirty: The Plot to Steal the Presidency,' the 2001 book by Jake Tapper now with ABC News (Tapper's Political Punch blog), Tapper reported on page 139: “A guy with a sign saying 'God Made Bush President' appears. Another, hyping the Web site Newsmax.com, starts shouting out that 'Peter Jennings and Tom Brokaw have bald spots.' This guy has a bald spot, too.”

Reminder: Bush Won in Florida Recounts Conducted by the Media

With HBO's 'Recount' movie (airing Sunday and Monday night at 9 PM EDT/PDT) sure to rekindle claims that Al Gore would have won if only the U.S. Supreme Court had not “stopped the counting,” a reminder that both recounts conducted by major media outlets in 2001 determined George W. Bush would have won anyway. Two stars of the film have fueled the re-writing of history with actor Kevin Spacey, who plays Gore operative Ron Klain, charging that “the Bush people were trying to stop votes from being counted and the Gore people were just trying to get votes counted” while Laura Dern, who plays Katherine Harris, recalled that the U.S. Supreme Court ruling left her “devastated because there were uncounted votes.”

George W. Bush would have won a hand count of Florida's disputed ballots if the standard advocated by Al Gore had been used, the first full study of the ballots reveals. Bush would have won by 1,665 votes -- more than triple his official 537-vote margin -- if every dimple, hanging chad and mark on the ballots had been counted as votes, a USA TODAY/Miami Herald/Knight Ridder study shows. The study is the first comprehensive review of the 61,195 "undervote" ballots that were at the center of Florida's disputed presidential election....

That look was followed in November by an analysis by a consortium of media outlets, including the New York Times, Washington Post, Los Angeles Times, CNN and AP. It determined that George W. Bush still would have won under either legally possible recount scenario which could have occurred: The Florida Supreme Court ordered recount of undervotes statewide or Gore’s request for a recount in certain counties. The New York Times led its November 12, 2001 front page article, “Study of Disputed Florida Ballots Finds Justices Did Not Cast the Deciding Vote,” by reporters Ford Fessenden and John M. Broder:

Dern 'Devastated' by Florida 'Because There Were Uncounted Votes'

Asked by Howard Kurtz on Sunday's Reliable Sources how she felt, “as a citizen,” when “the Supreme Court stepped in and essentially made George W. Bush President?”, actress Laura Dern, who plays Katherine Harris in HBO's Recount film to premiere tonight at 9 PM EDT/PDT, replied that “as a citizen, I felt devastated because there were uncounted votes” and “I left the experience with a real disillusionment about the process.”

Dern's personal view echoing the liberal/Democratic spin on what occurred matches the take expressed Wednesday by actor Kevin Spacey, who plays Gore operative Ron Klain in the movie: “It does seem that on the one hand the Bush people were trying to stop votes from being counted and the Gore people were just trying to get votes counted.”

Zbigniew Brzezinski says that since we talked to Likud, we should talk to Hamas. And Kevin Spacey, who has trouble keeping his disputed primary states straight, suggests that his "Recount" plays it straight, despite evidence to the contrary. All that and more on today's Morning Joe. In reverse order, let's begin with Zbig's appearance, and consider this statement.

ZBIGNIEW BRZEZINSKI: I have joined a bi-partisan group of some prominent Americans including Paul Volcker, Brent Scowcroft, Lee Hamilton, and some others, in saying that talking to Hamas is a necessary course of action. You know, we talked to Likud when Likud was advocating the total incorporation of the West Bank into Israel. And today Likud accepts a two-state solution. Hamas will evolve, but it will not evolve if it is continuously ostracized and threatened.

Spacey Confirms HBO's 'Recount' Is from 'Democratic Point of View'

Actor Kevin Spacey, who stars as Al Gore adviser Ron Klain in HBO's Sunday night Recount film about the 2000 post-election battle in Florida, conceded on Wednesday's Countdown on MSNBC that “the movie is done from the Democratic point of view.” That matches the observation of Entertainment Weekly magazine reviewer Gillian Flynn: “Recount is an underdog story, and thus a Democrat story.” On Monday's Late Show with David Letterman, in apparent references to Katherne Harris and President George W. Bush, Spacey quipped Florida in 2000 was “a confluence of events and personalities -- some of whom perhaps weren't qualified for their jobs, [pause] some of whom probably aren't currently qualified for their job.”

Wednesday night, Spacey told Keith Olbermann that Bush's team was more ruthless than Gore's: “I think there's no question what the movie illustrates is there were two differing philosophies about how to approach this recount fight. The Republicans pretty much, it was a street battle in their eyes. And I think on the Gore side, I think there was a -- perhaps an overestimated view of the patience of the American people.” Bottom line for Spacey in echoing the liberal take at the time: “It does seem that on the one hand the Bush people were trying to stop votes from being counted and the Gore people were just trying to get votes counted.”

Here's another sure sign the new HBO Campaign-2000-nailbiter movie "Recount" will have a liberal slant. (Sunday NB post on a review in Entertainment Weekly magazine, "HBO's 'Recount' Movie: Favors Democrats, Harris as Cruella De Vil"). In a full-page newspaper ad appearing on the back cover of the A section of Monday's Washington Post, it was endorsed as "terrific" by a list of Gore-voting liberal media notables: Joe Klein, Matt Cooper, Jonathan Alter, Tina Brown, George Stephanopoulos, and Judy Woodruff. The movie's slogan is "The future of the nation was hanging by a chad."

We haven't seen these quotes in print, so we assume they come from a celebrity screening or publicist interview. The text below in bold tells you which words were increased in size for emphasis:

The votes are in.

Matthew Cooper, Portfolio.com: "HBO is as good as ever. Watch ‘Recount’ and see...[they do] history better than any other studio."

Jonathan Alter: "This is the seventh presidential campaign I’ve covered for Newsweek and Recount conveys the nitty gritty of politics better than any movie I’ve ever seen."

An early review is in for HBO's upcoming movie, Recount, about the Bush-Gore battle in Florida after 2000 election. Gillian Flynn in Entertainment Weekly, which like HBO is part of the Time-Warner family, has described the film, to premiere next Sunday night, as tilted against the Republican characters.

In her review in the May 23 edition of the magazine, Flynn asserted: “Recount may not be downright blue, but it's not as purply as it wants to appear.” Saying “Recount is an underdog story, and thus a Democrat story,” Flynn reported that the “Republican players here are coolly calculating -- Tom Wilkinson's James Baker III, the Bush team quarterback -- or they teeter on the edge of madness, like Laura Dern's Katherine Harris.” In fact, in an interview elsewhere, the writer of the movie slammed Harris as “a fraud.” [Screen shot is of Dern as Harris]

You're a member of the MSM and a Barack Obama backer. But I repeat myself. More specifically, you're Chris Matthews. What better way to promote your guy's candidacy than to claim that Republicans would really rather run against Hillary?

That's just what the Hardball host did on this afternoon's show. Here's his exchange with the–in my opinion–very impressive Republican strategist Todd Harris, who worked for McCain in 2000, and with Dem strategist Michael Feldman.