Between Monday night and Tuesday morning, the “big three” of ABC, CBS, and NBC covered the news that a golf outing by President Obama at a course in Hawaii forced a Army to move their wedding location after planning to have it on the 16th tee.

While they covered the news, each network made sure their were plenty of laughs and golf-related puns throughout their 12 minutes and 4 seconds of coverage that included “golf diplomacy,” “no one was teed off,” and “the golf club owner really missed the fairway.”

On Monday afternoon, CNN’s Wolf covered the controversy surrounding President Obama’s playing of golf on a Hawaii golf course that forced an Army couple about to be married there to move their wedding during which CNN’s Chris Moody called the optics of the move “hilariously bad.”

Following a panel discussion on the 2016 presidential campaign, substitute host Brianna Keilar introduced the topic and after some background on what happened, Keilar and Time’s Zeke Miller did their best to defend the President and the White House, pointing out that there was “no way that the President” or the White House knew of this decision beforehand by the golf course.

Weasel Zippers has the latest superiority dance from Al Gore, in a speech at the University of Hawaii.

"Ultimately, we are going to win this thing," he said, one of many statements met with hearty applause from the Hawaiians, reported the Civil Beat. He displayed “a Bell Curve showing the number of hotter days over the past 80 years grow alarmingly disproportionate to the number of cooler days and days with average temperatures.”

On the “Free For All” page in Saturday’s Washington Post devoted to letters to the editor, three locals smacked the Post for failing to note the 72nd anniversary of the Pearl Harbor attacks on December 7.

None of the letters as printed made the point that the Post has “flooded the zone” with lots of coverage and special sections this year for the 50th anniversary of Martin Luther King’s March on Washington and then the JFK assassination. So what about the 70th anniversary of Pearl Harbor in 2011? What did that draw?

My nominee for Media Puppet of the Day (we should consider making such an award a daily or weekly event) is Kathleen Hennessey at the Los Angeles Times.

From her perch at the paper's Washington bureau, she wrote a pathetic story today about how President Obama is so much more relaxed now that he's in his second term. Among other howlers, Hennessey claims that "Obama's vacations have been rare, brief and regularly interrupted by crises at home and overseas." Key paragraphs -- as many as I think readers will be able to stand, and no more -- follow the jump (HT to NB commenter Gary Hall at another post; bolds are mine):

Christmas: a season of generosity, good cheer, preparation for Christ’s birth – and a swarm of lawyers seeking to purge any mention of Christianity from the public square.

Every Christmas, the so-called secular community starts shrieking whenever any mention of religion is brought into the public eye. Lawyers successfully targeted a school’s performance of ‘A Charlie Brown Christmas.’ Even Christmas trees have too much religious content to suit the self-appointed censors. 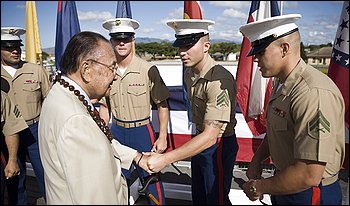 King Kamehameha's got nothing on Sen. Daniel Inouye (D). The former may have united the island kingdom of Hawai'i in 1810, but the latter's been a reliable vehicle of federal taxpayer pork for the Aloha State for more than 50 years.

That, in a nutshell is the thrust of "Tropical reign," today's Style section front page profile of the 86-year-old president pro tempore of the Senate:

More than any other statesman in the history of these volcanic islands -- more than Kamehameha the Great, who united them into a kingdom in 1810, or Gov. John Burns, who led the political revolution that established Democratic Party rule here in 1954 -- Inouye, 86, has ruled over Hawaii.

As the federal funding he has provided has grown, his political opposition has waned. Hawaiians have voted for Inouye for 56 years, first for territorial representative in 1954, then for Congress in 1959. In 1963, he became the nation's first Japanese American senator. His uninterrupted stretch of service in the country's most exclusive chamber is the second-longest in history behind the recently deceased Robert Byrd, whom Inouye replaced as the Senate's senior member and president pro tempore in June. That position, ceremonial though it is, puts him third in line to succeed the president.

Continuing the theme of this election cycle, Barack Obama, the junior senator from Illinois, took a vacation to Hawaii and .... wait for it .... still generated more stories and headlines than his still-campaigning rival, John McCain. According to the Pew Research Center's latest review of the news, "the Democrat registered as a significant or dominant factor in 63% of the campaign stories studied, compared with 50% for McCain."

But the Obama hype-machine that is the MSM may unwittingly help John McCain. At least, that's what Michael Goodwin suggests in his latest column.

Perhaps it should strike no one as big news that PBS and Democrats often go together like peanut butter and jelly. The Honolulu Star Bulletin reported today that the president and CEO of PBS-Hawaii, Mike McCartney, is running for chairman of the state's Democratic Party:

McCartney says he has taken a leave of absence from the statewide public television operation and will step down next month.